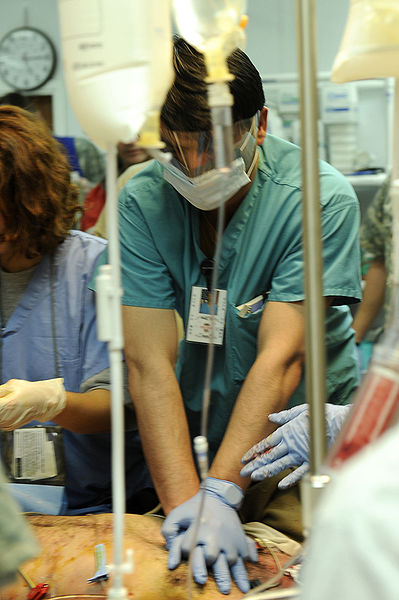 Yesterday, we had two codes in our hospital’s lobbies. I get a page for every code blue that occurs at our hospital; it allows me to keep my finger on the pulse of the hospital. Code blue is the designation we give for a cardiopulmonary arrest. When a code occurs on a nursing unit, it is usually the real thing because the nursing staff are the ones calling it and they are very good at initial assessment of a patient’s condition. On the other hand, in public areas, the codes are often called by non-clinical hospital staff who are not skilled in patient assessment and so in the past, most of the code blues that occur in the lobby or the parking lot, or ambulatory clinic locations were for situations like a patient falling or fainting. Therefore, codes in those locations were seen by many physicians and nurses as being less urgent and would often be ignored by physicians who were not a designated member of the code team.

Life has changed and the 2 codes from yesterday illustrate why.

The first code was in the lobby of Talbot Hall, the drug and alcohol treatment wing of our hospital. The patient was blue as a Smurf and needed to be intubated while he was lying on the floor of the lobby because of hypoxemia and respiratory depression. He had walked into the building to see if he could get alcohol detox. It turned out that his blood alcohol level was 0.4, five-times the legal definition of intoxication. He is now getting detoxed in our ICU.

The second code was in the lobby of the main hospital building. A young woman was found by a friend semi-conscious in the bathroom of a local Wendy’s restaurant and so she packed her up in her car and drove to the hospital where she helped get her to the information desk. There, the woman collapsed so the information desk attendant called a code blue. Like the first patient, she was also cyanotic. The team started ambu-bag ventilation. Years of drug abuse had withered away all of her veins and so as the code team was preparing to place an intraosseous needle in her bone, they tried one last sternal rub to wake her up. She took a couple of breaths and so they were able to get her to the ER where she was given Narcan to reverse her heroin/fentanyl overdose. She was later discharged back to the streets.

These two patients reminded me of the first time I had to manage a code. I was a fourth year medical student in a private hospital in Columbus doing an internal medicine rotation with one of the other medical students. We were standing in line for lunch in the cafeteria when the man standing behind us dropped dead. We checked for a pulse (which he didn’t have) and one of us did chest compressions while the other did mouth-to-mouth resuscitation. The lady at the cash register called the operator who announced a code blue to the cafeteria. I looked up as I was doing CPR and saw several of the attending physicians that I knew grab their lunch trays and leave the dining area. Finally, one intern showed up and the three of us ran the code for 20 minutes in the cafeteria before pronouncing the patient dead. No other physicians came.

Code blues in public areas of the hospital are often treated as less-emergent because frequently they are non-emergent. But these codes can sometime be the real thing. Currently, an average of one person in Central Ohio dies every day due to a drug overdose – usually a combination of heroin and fentanyl. Drug and alcohol overdose patients often make their way into public areas of the hospital before they stop breathing. So now days, when a code is called to the hospital lobby, it epitomizes that cardinal rule of medicine:

You just don’t know until you know.