The Association of American Medical Colleges tracks physicians in different specialties by the percent who are under age 55 versus those who are over 55 and the data is summarized in the graph below:

For all physicians combined, 56.8% are under age 55 and 43.2% are over age 55. However, some specialties are disproportionately older or younger. My own specialties of pulmonary (15% under age 55) and critical care (84.3% under age 55) is probably more a reflection that most of these physicians are dual certified and tend to do more critical care earlier in their career and migrate to more pulmonary later in their career. Similarly, emergency medicine with 65.4% under age 55 is a relatively new discipline that did not become recognized as a specialty until 1979 and did not offer a board examination until 1980.  There are some specialties that are more concerning. For example, pathologists, psychiatrists, cardiologists, and thoracic surgeons tend to be older whereas interventional radiologists, nephrologists, and pediatricians tend to be younger. Those specialties that have more than 50% of the physicians over age 55 are likely to be in high demand in the next 10 years as these older physicians retire.

A study in the Journal of Medical Regulation from 2017 analyzed the U.S. physician workforce by a number of parameters, including age. Taking all physicians together, 29.3% of practicing physicians are over the age of 60. The reasons why there are so many older physicians in the workforce are complex and include (1) a later age of entry into the workforce due to lengthy training requirements, (2) a high amount of debt from the cost of education, and (3) less physical demands than many other professions. 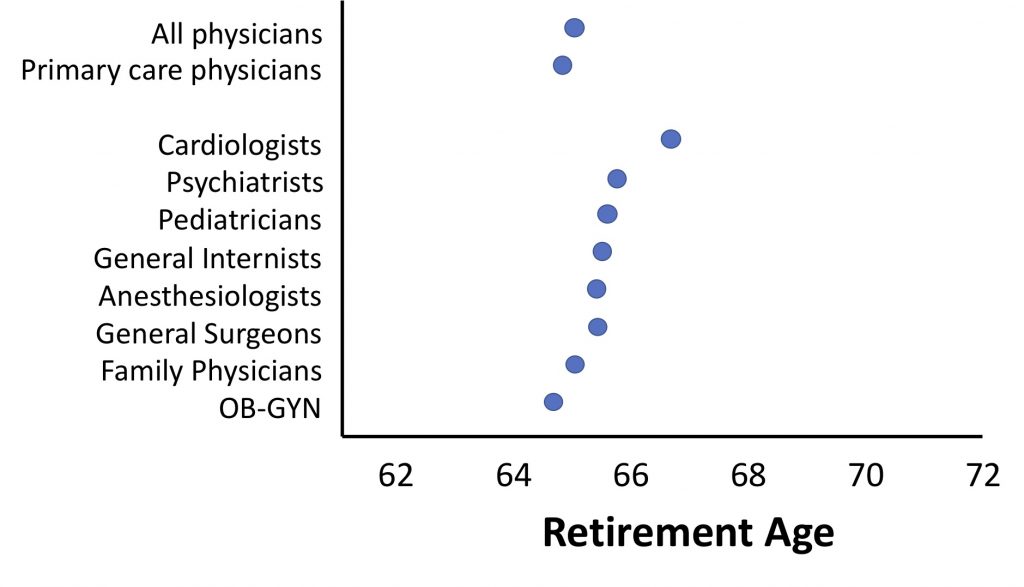 As a medical director, one of the most uncomfortable tasks I have to do is to tell an older physician with a long history of dedication to the medical profession and the community that it is time that he or she needs to stop seeing patients. It is not because of age per se but because of quality concerns. It turns out that this is a valid issue. A study in the BMJ found that for Medicare patients, the 30-day survival after hospital discharge depends on the age of the physician. 30-year old physicians had a 10.5% 30-day patient mortality rate whereas 70-year old physicians had a 13.5% 30-day patient mortality rate. Although part of these results could be because older physicians tend to have combined inpatient and outpatient practices with an older (and sicker) panel of patients whereas younger physicians tend to be hospitalists that care for a wider age range of Medicare patients, it is also quite possible that older physicians do not practice as high of quality of medical care as younger physicians. This has unfortunately been my experience with some older physicians.

There can be a lot of reasons why physicians retire and last year I wrote a blog post about “When Physicians Reach Their Use-By Date” to reminisce about how some of the more memorable physicians I have known retired. The keys are to have enough self-awareness to know when your clinical skills are lagging behind your peers and to be willing to pick up on subtle hints from those peers that you are not the clinician that you used to be.

So, what does all of this mean? First, doctors retire later than people in many other professions. Second, doctors who chose to work beyond age 65 need to be attentive to their quality of practice. Third, and perhaps most important from a national health care standpoint, certain specialties are dominated by older physicians who will be retiring soon, thus creating demands for those specialties that will be difficult to meet.

The hockey legend, Wayne Gretzky, famously said: “Skate to where the puck is going, not to where it has been”. I think that this has implications for our medical students who are selecting specialties – knowing what specialties are going to be in demand rather than what are currently in demand should affect their career choices.