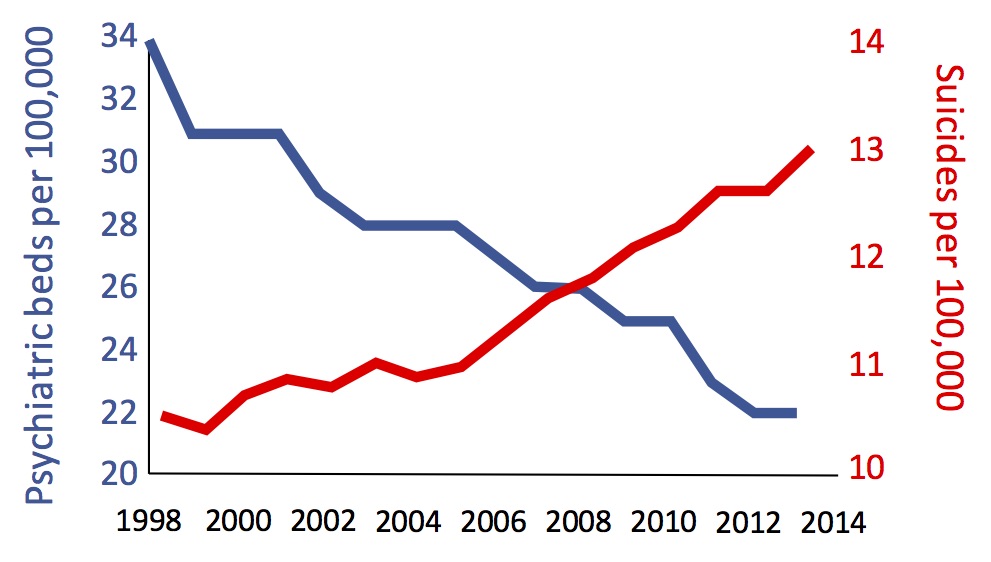 Suicide in the U.S. is increasing. It is the second leading cause of death for people age 10-34 and the tenth leading cause of death overall. Americans favorite method of suicide: firearms. One of the reasons for our country’s increasing suicide rate is the declining number of psychiatric beds compared to other nations. The Organisation for Economic Cooperation and Development (OECD) is a group of the top 35 industrialized countries in the world. A recent study analyzing the U.S. suicide rate found that it correlates perfectly with our declining psychiatric bed availability. Since 1998, we have had a 35% drop in the number of psychiatric beds. At the same time, we have seen a 24% increase in suicides.

It is not because we are psychiatrically healthier. Here in Central Ohio, our psychiatric beds are almost always full. This results in psychiatric patients backing up in our emergency departments, waiting to be admitted. Last week, for example, when I got in to work, we had 11 patients in the ER who were “psych holds”, that is patients who were determined to be at too high of risk of causing harm to themselves or others to release. They occupied 38% of all of our ER beds. Because each of these patients requires a “sitter” to watch them to ensure that they do not harm themselves or leave the ER, it ends up being an enormous use of hospital staff and resources.

The time suicidal patients spend in the emergency department is often wasted time. There are usually not psychiatrists, counselors, and social workers who can initiate the psychiatric care that the patients need. The patients are psychiatry purgatory, waiting to go somewhere that they can get their treatment.

As a society, we are under a constant demand to increase emergency department beds in order to meet the needs of our communities. Perhaps our first step should not be increasing ER beds but instead, increasing psychiatric beds. Surely the greatest economic powerhouse nation in the world can at least strive to be average in psychiatric care.