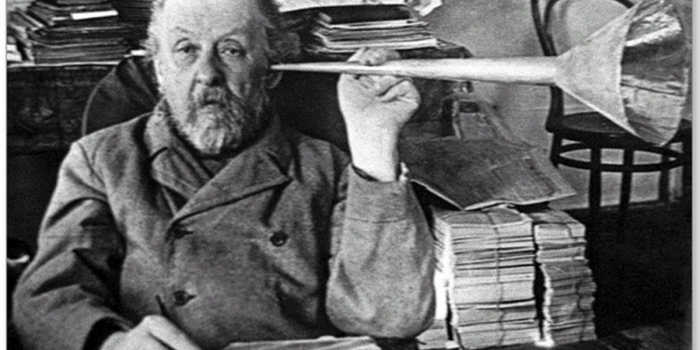 Last month, I attended the American College of Chest Physicians annual meeting. At one of the sessions, I realized I could hear the men talking but I had a hard time hearing the women despite the fact that they were all standing in front of the same lectern and all speaking in what seemed to be normal conversational speech. I realized that there can be implicit gender bias in lecture acoustics and that women need to be aware of some of these sources of acoustic bias in order to be effective speakers. There are several sources of acoustic gender bias. In this post, at the risk of being a male talking about female gender bias, I’ll explore several of these. 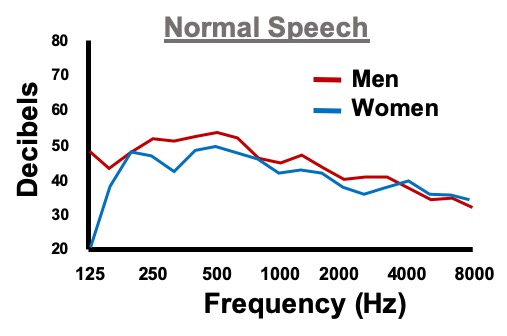 Humans are wired to associate lower frequency voices with authority. In a study of male CEOs, the size of the company that a CEO ran correlated with the frequency of his voice – a lower voice pitch was associated with running a larger company and correlated with a higher salary. Interestingly, the average frequency of adult women’s voices has fallen by 23 Hz since 1960 which may reflect evolving societal differences in women in positions of authority. Because children have higher pitched voices than adults, a high-pitched voice can make a person sound young or inexperienced.

Many sound systems are adjusted to make the (often male) CEO sound great and this can put people with higher frequency voices at an inherent disadvantage unless there is someone tending the sound system who can make everyone sound just as great as the CEO. 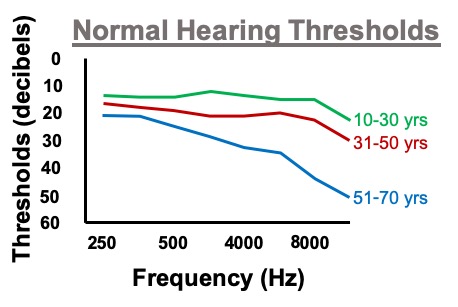 As we get older, our ability to hear high frequencies is diminished. Business owners use this to their advantage when they install a Mosquito alarm outside their buildings. This device emits an annoying 17,400 Hz noise that loitering teenagers can hear but older people are oblivious to. High frequency hearing loss begins at age 30 and increases with each decade of life.

As a result, many older people have a hard time hearing female voices with their higher frequency pitch. This is not an issue if you are lecturing to a group of college students. However, if you are lecturing to an older group of people or giving a presentation at a board meeting full of older board members, then a higher frequency voice is harder to hear. A woman often needs to speak slightly louder to be heard as well as her male colleague.

There are two pieces of equipment that can affect how women’s voices project as opposed to men’s voices: the microphone and the equalizer. Each microphone will have a frequency rating that reflects how well it picks up different sound frequencies. A microphone that is better at picking up lower frequencies will tend to make a male voice sound louder and a female voice sound softer. 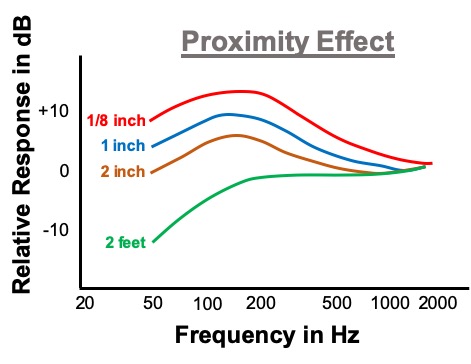 A second way that the microphone can cause discrimination by the “proximity effect”. This occurs because lower frequencies tend to be lost the further away a person is to the microphone. The average American man is 5 foot 9 inches tall where as the average American woman is 5 foot 4 inches tall, a difference of 5 inches. If a lectern microphone is set to position that microphone for the height of a man’s head, then a woman’s head is going to be 5 inches further away from that microphone with the effect of losing her lower frequency elements of speech. Therefore, simply by being closer to the microphone, you can augment the lower, or base frequencies in your voice. An easy way to demonstrate this is to use the “voice memo” app on your phone and record your voice saying the same thing with the phone 2 inches, 12 inches, and 24 inches away from your mouth. At 2 inches, your voice will have more base elements and will sound deeper and richer.

Two other effects of the distance to the microphone is on reverberation and “popping noise”. Reverberation, or the echo of one’s voice in a room, becomes more evident when there are non-porous materials in the room (for example, concrete walls) and when one gets further from the microphone that they are speaking into. Those echos can make words harder to hear.

If a person gets too close to a microphone, then the microphone can pick up puffs of air that can accompany sounds like the letters “p” or “b” and this can result in a distracting popping sound to one’s speech. Professional musicians overcome this by using a pop-filter composed of a piece of stocking-like material stretched and mounted as a screen between the microphone and the singer’s mouth. Pop-filters are impractical in a typical lecture room. The best distance is usually 6-12 inches between microphone and mouth; this distance is the best compromise between reducing popping sounds at the same time as reducing reverberation and room noise. 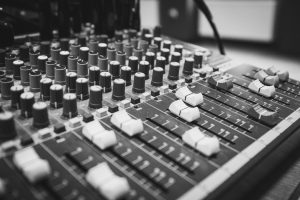 In order to account for different frequencies, equalizers are often used by sound engineers. An equalizer allows the engineer to preferentially amplify sounds in different frequency ranges and this can be used to “equalize” voices of different pitches, for example, men versus women. The bass and treble knobs on a radio are the most simple form of an equalizer. An equalizer in a lecture room can have between 5 and 31 sliders with each controlling a range of frequencies. Most lecture rooms don’t come with professional sound engineers, however, and so equalizers in a sound system may be set to a factory default frequency preference or the equalizer may be run by an audio-visual staff member with little idea of acoustic optimization. If you ever go to a small venue concert, the singer will almost always recognize the person running the sound system at the end of the show – how well that person manages the equalizer can make an enormous difference in how the singer sounds. The person running the lecture room sound system is just as important to the effectiveness of the lecturer.

The acoustic response of a room if affected by many variables but one of the more important is the degree of absorption of different frequencies. Porous materials in a room, for example, carpet or fabric, can reduce reverberation and echos but will also absorb high frequency sounds. Thus, a person with a high frequency voice may not seem to be as loud as a person with a lower frequency voice. The more porous materials are in a room, the more a woman’s voice can be lost.

There are 5 main features of a person’s individual voice brand: intensity, inflection, rate, frequency, and quality. Adopting different elements of each of these features can significantly impact the effect a voice can have on a listener.

Rate is the speed of one’s speech. Too slow comes across as condescending but too fast comes across as being rushed. Varying the rate of speech can be an effective way of emphasizing certain points. A good rate range is 162-175 words per minute.

Frequency is the pitch of the voice, usually measured in hertz (Hz). Too high of a frequency can make one sound young or less intelligent, as discussed above. Too low of a frequency can be authoritative but can also come across as aggressive.

Quality are those characteristics of a voice that can create an “interesting voice”. Two voice qualities to avoid in public speaking are the “glottal fry” and “up-talking”. Glottal fry is when a person takes their voice down to an unnaturally low pitch during part of a phrase resulting in a creaky or graveling timber. A study of voice perception found that people over age 40 believe that speakers using vocal fry sound like they lack authority. Up-taking, or high rising terminal, is when a person increases the frequency of their voice at the end of a sentence. This results in a tone that sounds like a question and can make the speaker come across as unsure of themself or uncomfortable.

So what can women do? 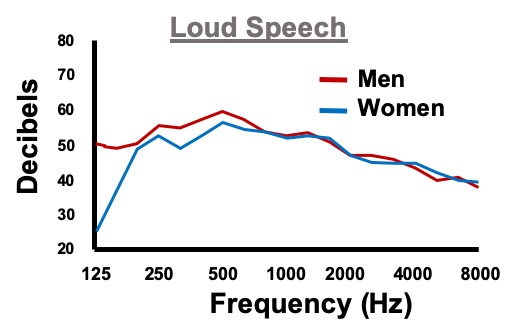 The first thing one can do is to speak louder. As men and women speak in a loud (but not shouting) voice, the differences between the acoustic perception of different frequencies of sound become less apparent.

So, if a woman speaks slightly louder than normal, she can eliminate the auditory perception gap that exists between male speech and female speech, particularly in the lower vocal frequencies. This becomes more necessary when a woman is speaking to an audience of mostly older persons.

A second strategy involves speaking with the person running the sound equipment for the lecture room (when such a person exists!). Many times, they will have set the equalizer to a default setting or they will have optimized it for whoever the first speaker is. If that first speaker is a man with a low pitched voice, then the woman who is the second speaker will often be acoustically disadvantaged. Asking the sound technician to be sure to adjust the equalizer when you are giving your presentation will remind that technician that you are aware of the importance of what they do and ensure that he or she optimizes the settings for the unique frequencies of your voice. 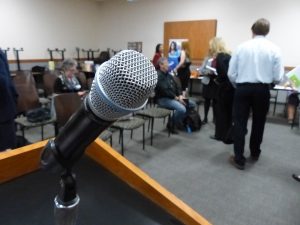 A fourth strategy is to adjust your voice brand. Most of us do not really know how we sound to others. Recording a practice session of your presentation and then listening  to it can help you identify features such as glottal fry and up-talking that may not have much impact on younger audiences but can make you seem less authoritative to older audiences. Ensure that your rate is 162-175 words per minute and that your intonation is neither too monotone nor too up-and-down.

To be successful, it is important to not only be qualified but to also sound qualified.

There are a lot of signs that the "great recession" that began in 2008 is over. The unemployment rate is the lowest that it has been in 12 years. Manufacturing...

Planning For Retirement For Physicians Part 4: Maximizing Your Annual Return?

This is the fourth in a series of posts made in preparation for a presentation I will be making for physicians in fellowship training. In the last post, I demonstrated...

We do monthly audits of how compliant our hospital personnel are with hand hygiene. Last month, our hospital hit 97% and the month before, 98%.  The policy is that everyone...