I have a confession… I am a flu nerd. Every winter, I check the Center for Disease Control’s FluView website every Friday for epidemiology updates and I track the number of cases of influenza in our own hospital weekly. Most years, what happens in Australia in August and September predicts what will happen in the United States in February and March. And this year, there may be some good news from down under. 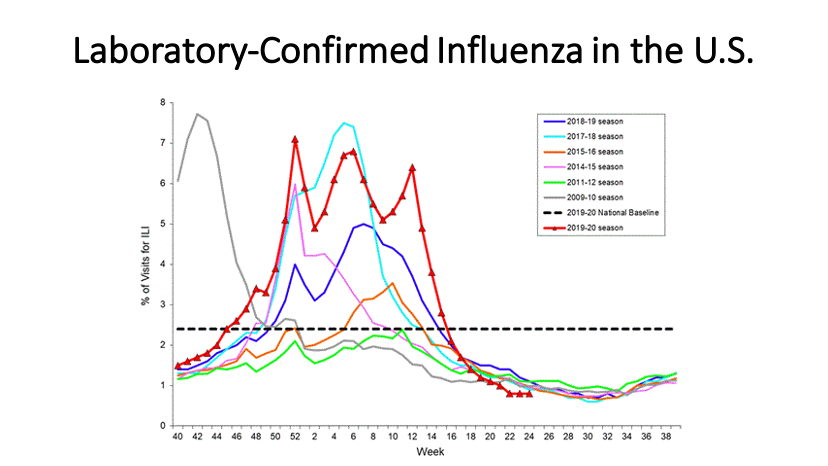 When it is summer in the United States, it is winter in Australia and so Australia’s flu season is the opposite months of the year as the United State’s. Last year, the Australian flu season was unusual: it started earlier in the year and there was a much higher percentage of influenza B than normal. Sure enough, last winter in the U.S., our influenza season also started earlier than normal and was characterized by mostly influenza B in the beginning of the winter and then mostly influenza A later in the winter. This graph shows the number of influenza cases by week of the year for 7 recent flu seasons (week 1 is in January). The red line is the 2019-2020 flu season (the gray line was the H1N2 pandemic of 2009).

Some studies of COVID-19 infections that occurred last winter indicated a high rate of co-infection with other viruses, particularly in children. The most common co-infecting virus was influenza. A fear of epidemiologists is that when the U.S. has its next influenza season in the winter of 2020-2021, co-infection of influenza and COVID-19 could result in an accelerated spread of COVID–19. 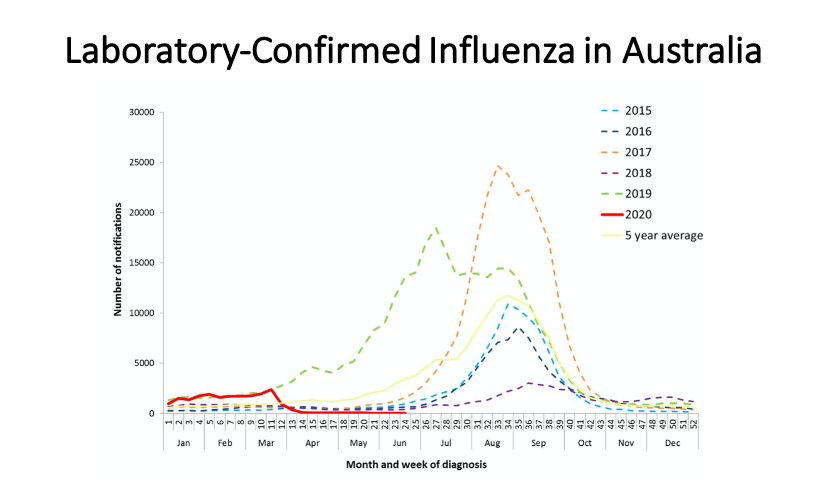 It is still early to be sure since the peak of influenza in Australia normally occurs in August and September. But the early indication is that this is going to be one of the lightest influenza seasons on record in Australia and if so, then history tells us that the U.S. could have a light influenza season, also.

However, for this to happen, the U.S. will need to keep up social distancing and hand hygiene. As schools re-open in the fall and as workers return to their jobs, it may be very difficult for us to maintain our public health momentum next winter. So, this year Australian influenza epidemiology may not predict U.S. influenza epidemiology. Nevertheless, the information indicates that influenza can be controlled the same way that COVID-19 is controlled: staying home when you’re sick, washing your hands regularly, and avoiding those people who are sick.

But all Americans still need to get a flu shot this fall.