When a hospital runs a positive margin and makes money at the end of the year, everyone wants some of it – hire more doctors, hire more nurses, buy a new MRI machine, build a new hospital wing. It can be tempting to spend it all but should you? Liquidity is survival insurance for a hospital and it is essential to hold some money back. Every individual person should have an “emergency fund” with 2-6 months of expenses held in a checking/savings/money market account, and so should hospitals. These cash reserves are called “days cash on hand” and represent the amount of money it takes to pay all of the hospital’s expenses for that number of days. 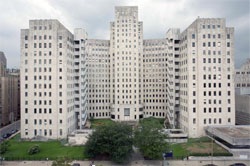 A few year ago, Dr. Charles V. (Bo) Sanders gave a presentation at the annual Association of Professors of Medicine meeting that I was attending. He is the Chairman of the Department of Medicine at LSU School of Medicine in New Orleans and was describing the effect of Hurricane Katrina on the hospital and his department. Katrina flooded Charity Hospital which then closed, displacing most of the doctors in his department. With limited cash reserves, the hospital could not pay physician salaries and many of the doctors and nurses moved on. The hospital essentially died and was never able to reopen.

Charity Hospital is just one example of why a hospital needs to have sufficient days cash on hand but there are many things other than hurricanes that can temporarily close a hospital and require it to draw from cash reserves to cover payroll so that all of the employees don’t leave. Fire, flood, lapse of malpractice insurance coverage, prolonged power outage, unpredictable admission rates, you can think of a dozen other reasons that a hospital might have to reduce or close operations for a day, a week, a month, or longer.

From this analysis, it appears that the number of days cash on hand that is held by hospitals appears to be increasing over the past decade. I believe that there are at least three reasons. (1) The economic recovery since the great recession has led to overall better financial positions of U.S. hospitals. (2) Medicaid expansion (by those states that elected to participate) has led to a reduction in uninsured patients and this translates to improved margins. (3) Better analytics that are attendant to electronic medical records, better inventory management programs, and improved staffing programs has resulted in better hospital operational efficiency as well as better hospital billing efficiency.

There are a number of factors that can influence the ideal number of days cash on hand for any given hospital:

Although having a large number of days cash on hand sounds good, too high of a number can be bad. For example, it may be better to invest that money in a better-paying investment, for example expanding the hospital’s primary care base by hiring additional primary care physicians. Or, if the hospital’s quality metrics are below average, it is better to spend additional money to improve patient satisfaction, decrease hospital readmissions, or improve the infection control efforts. For public hospitals that are owned by the city, county, or state, having too high a number of days cash on hand can create a perception to lawmakers and the public that the hospital is hoarding the public’s money.

So, what is the best number of days cash on hand? From this post, it should be clear that there is not a single best number for all hospitals. I’d start with a number of about 300 for standalone hospitals and about 250 for hospital systems. Then move that number up or down depending on all of the variables mentioned above. For a decentralized health system in a Medicaid expansion state that does not have excessive natural disaster risk and does not anticipate purchasing large amounts of bonds, 130 days may be plenty. On the other hand, a centralized standalone hospital in a competitive market in a state that did not participate in Medicaid expansion and is at risk of natural disasters and also plans on a major building expansion requiring bond sales, 400 days may be more desirable.

The number of days cash on hand is something that physicians rarely think about and almost never incorporate in their decision-making about whether to take a job at a hospital. But I think that physicians should take notice of this number and if it is too low, ask the hospital administrators why it is low. If you can’t get a good answer, think long and hard about whether that hospital represents a risky career choice.