I am on this earth because of influenza. This is the 100th year anniversary of the influenza epidemic of 1918 that infected 1/3 of the word’s population and killed 1 out of every 10 people infected. One of those people was my grandmother’s first husband. She was a nurse at a hospital in Durham, North Carolina and after her husband’s death, she met a physician fresh out of medical school, my grandfather. So, if the influenza epidemic had not have occurred, she and my grandfather would never have married and I never would have been born. 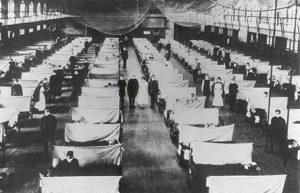 All told in 1918, 675,000 Americans died of influenza; that works out to 1 out of every 150 citizens. It was particularly lethal for young persons with the result that the U.S. life expectancy dropped from 49 years to 37 years for men and from 54 years to 42 years for women. The influenza strain that swept the world in 1918 was H1N1, the same strain that caused the 2009 pandemic of influenza that also seemed to preferentially kill young adults. 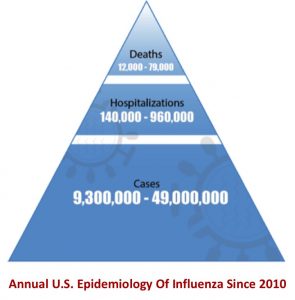 In 2009, 12,000 people in the United States and a half million people worldwide died of influenza. The problem in 2009 was that the strain of H1N1 that emerged was one that had not circulated in humans for decades – about 1/3 of people over age 65 years had antibodies to it from past infection but few young adults had ever been exposed to H1N1 and thus few young people had any immunity at all. Most years, 80% of influenza deaths are in people over age 65 but in 2009, 80% of deaths were in people under age 65. The H1N1 pandemic was therefore notable not for the total number of deaths (which was actually rather low) but for the fact that most of the deaths occurred in young adults. Even in non-pandemic years, influenza kills thousands of Americans. For example, last year, the CDC estimates that 80,000 Americans died of influenza and its complications, the most deaths in 4 decades. 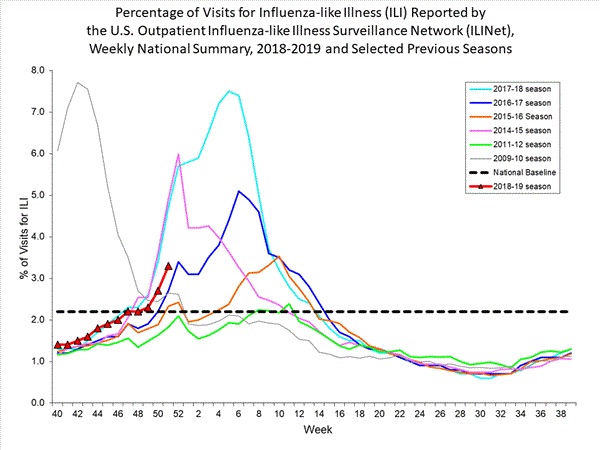 As of December 22, 2018, the epidemiology of this influenza season (red line in this graph from the CDC) is falling in-between that of the 2016-2017 season and the 2017-2018 season. Most of the influenza being seen this year is once again the influenza A H1N1 strain with a smattering of H3N2 and influenza B. The flu claimed its first celebrity of the season this week when 26-year-old Fox News commentator, Bre Payton, died the day after developing influenza.

Yet still there are people who fear influenza vaccinations and refuse to get a simple and inexpensive flu shot that can save their lives. Here are some of the reasons for not getting a flu shot that I hear from my own patients:

At the time of writing this blog post, influenza is already widespread in many states. In the next few weeks, my hospital’s nursing units and ICU will be full of patients with influenza-related illness, and some of them will die. Those patients who survive the ICU are always the first ones to ask for a flu shot the next year. But for those who die, like Bre Payton, influenza always gets the last word.