The Australian Department of Health maintains a robust website with up to date influenza epidemiology information. The 2019 Australian data indicates that influenza started early this season as is depicted in the red line in the graph below. 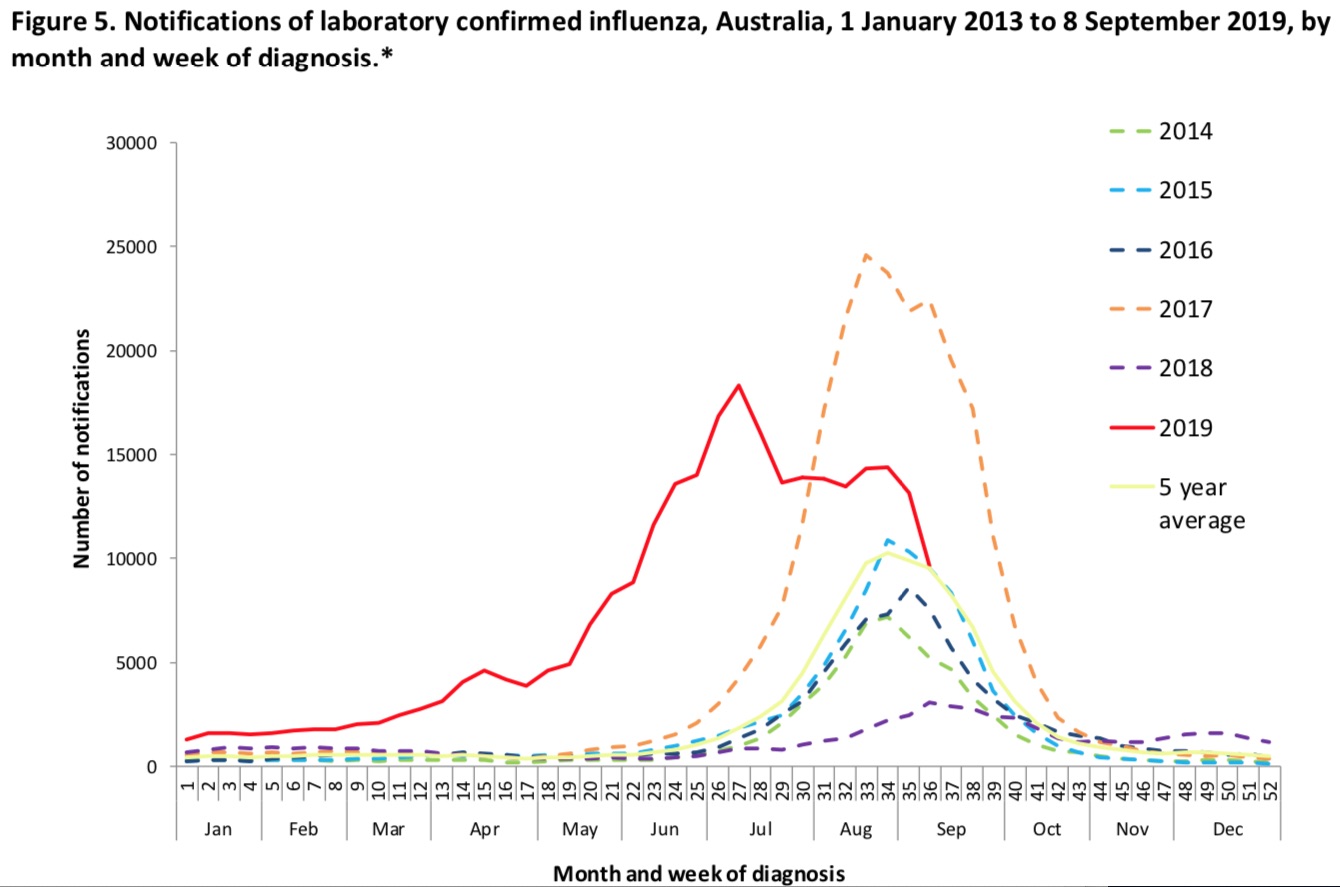 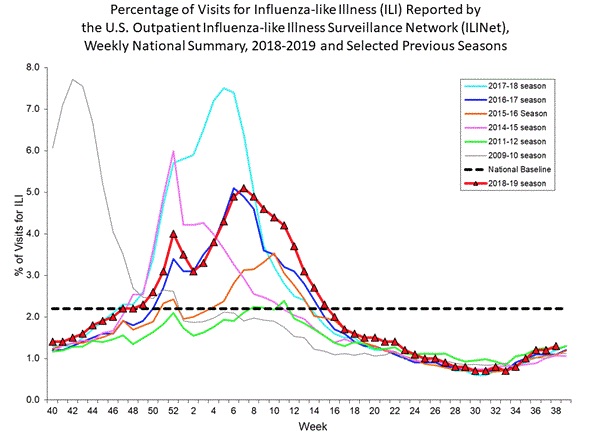 In the above graph, we see the last 5 influenza seasons plus the 2009-10 season (the H1N1 epidemic) and the 2011-12 season. In 2009, the U.S. was caught off guard with the early arrival of H1N1 influenza that started in April and peaked in October. That year, 61,000 Americans got influenza and 12,500 Americans died of it (especially young persons). The 2017-18 influenza season (turquoise line in the graph) had the highest percentage of visits for influenza-like illness in the past 5 years. Comparing that curve to the 2017 Australian influenza season (brown line in the previous graph), there is remarkable similarity. 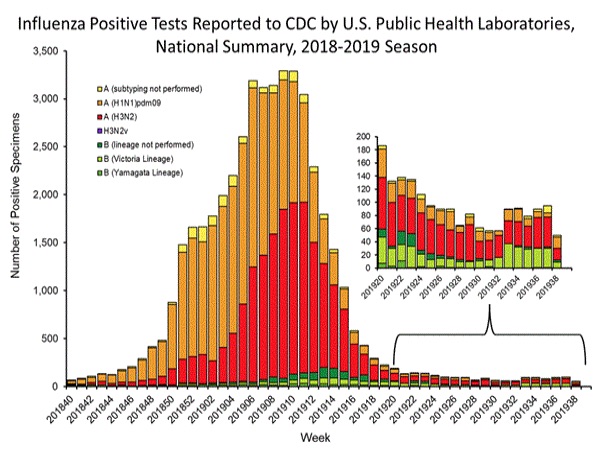 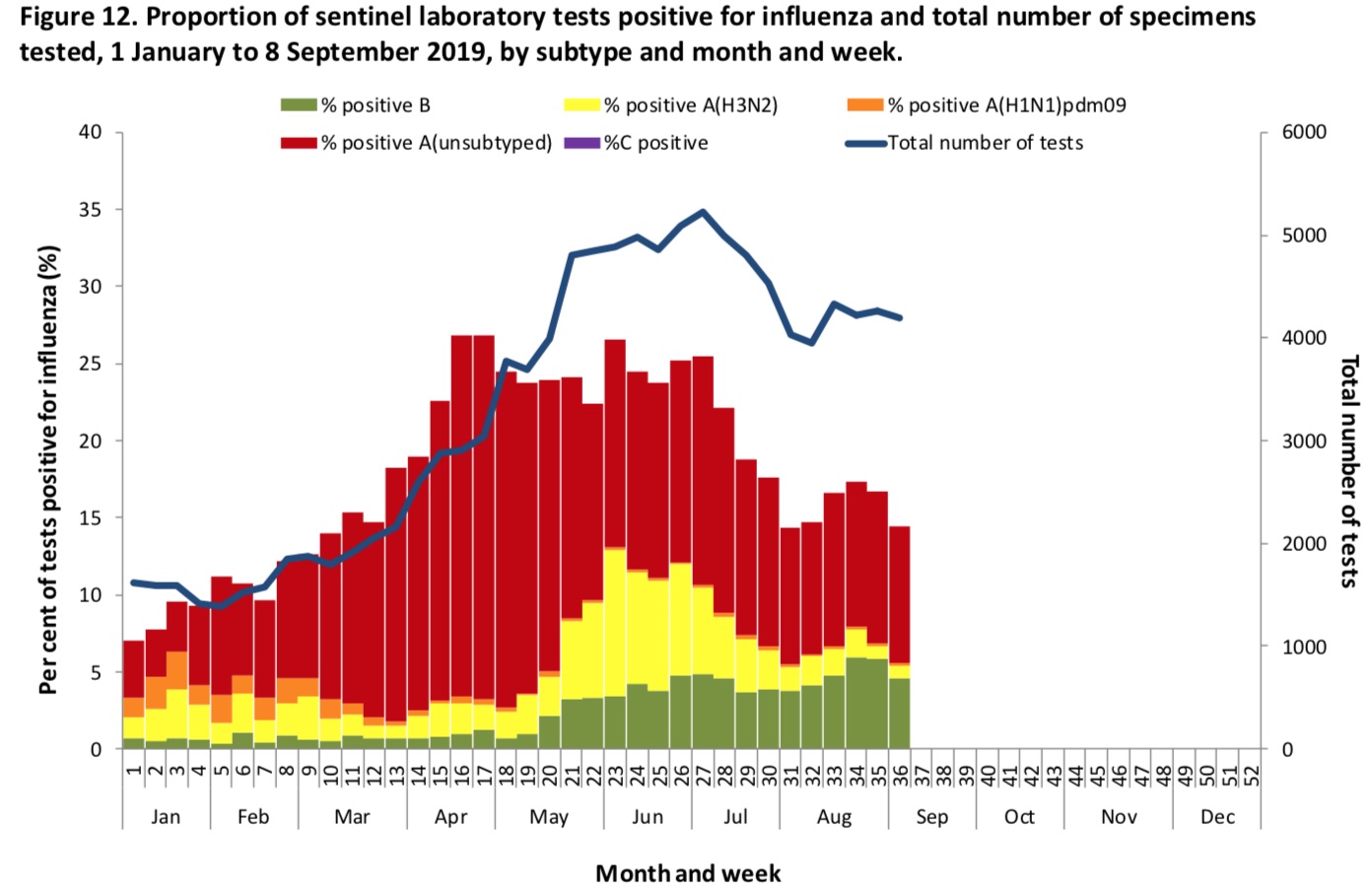 The 2019-20 U.S. standard strength influenza vaccine is quadrivalent and will cover the following 4 strains:

The vaccine is available in a standard strength that is indicate for persons over age 6 months and is made by several manufacturer, sold under brand names including Alfuria, Fluzone, Fluarix, and FluLaval. A high strength (Fluzone High Dose) contains about 4 times the amount of antigen and is indicated for persons over age 65. Unlike the quadrivalent standard strength influenza vaccine, the Fluzone High Dose vaccine is trivalent and does not cover the influenza B/Yamagata virus. This could have immunity implications if the U.S. sees an unusually high number of influenza B cases, as was seen in Australia this summer. Also, the Fluzone High Dose vaccine has a higher incidence of side effects such as injection site pain, fever, and myalgia. So the decision of which vaccine to use in persons age > 65 is not clearcut – the CDC does not recommend one vaccine over the other in people over age 65.

The good news for the upcoming influenza season is that we now have a new drug to treat influenza, baloxavir (trade name Xofluza®) that is given as a single one-time dose and will cost about $150. Tamiflu® is now available as generic oseltamivir at a cost of about $50 for a 5-day course.

So, what can physicians in the United States take away from this season’s Australian influenza season? Vaccinate your patients and do it now!