This morning, I was contacted by the emergency department. We had a patient who came in with severe agitated delirium to the point that no combination of sedative and anti-psychotic medications could control him and keep him from harming himself or ER staff members. Ultimately, he had to be intubated and placed on continuous IV sedatives. It reminded me of a similar case from a couple of years ago.

A young man was brought into the ER by police after being found sitting on a park bench, yelling and shouting at no one in particular. He had no identification on him and we had no idea who he was or where he lived. In the ER, he was tachycardic, hypertensive, and had agitated delirium to the point that he, also, had to be intubated and admitted to the ICU. When he got up to the ICU, his tox screen came back positive for cocaine. So, we decided to leave him intubated, sedated, and paralyzed overnight until the cocaine wore off and then let him wake up and extubate him.

The next day, we tapered his sedatives off and almost immediately, he became tachycardic and hypertensive and he began to flail around in his ICU bed. So, we re-started his sedatives for another 24 hours. The next day, the same thing happened: shortly after stopping his IV sedatives, his heart rate and blood pressure shot up. Once again, we restarted his IV sedation and left him on the mechanical ventilator.

Later that afternoon, when the nurses were giving him a bath, one of the nurses noted a piece of rubber protruding from his anus. They called us over and we pulled out a broken condom that was partially full of white powder. We got an abdominal x-ray and found that his entire rectum was full of balloons. With the help of some laxatives, a couple of enemas, and with oversight by our hospital security staff, we were able to get him to expel all of the balloons full of cocaine. 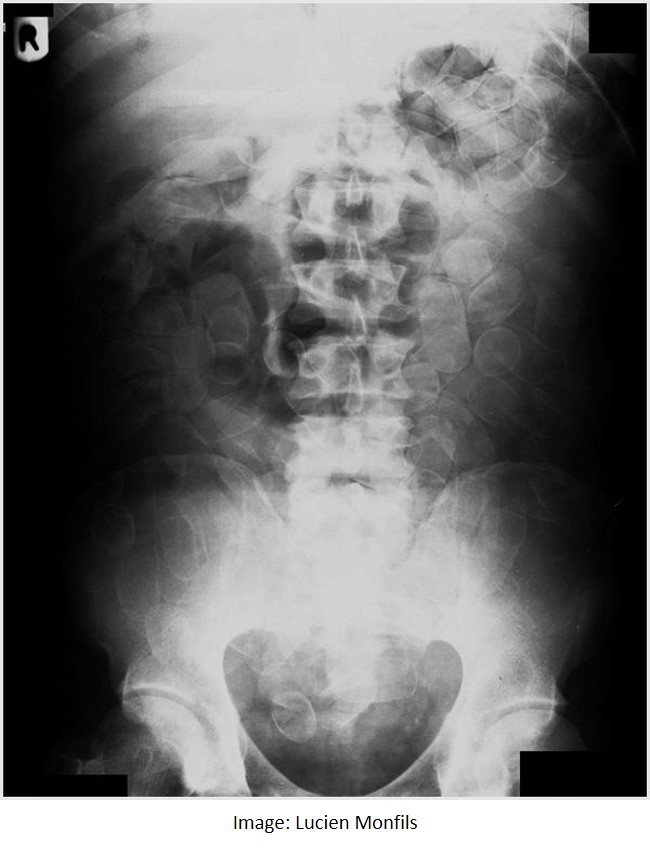 It turned out that the broken cocaine condom had been continuously overdosing him with cocaine so that he never got a chance for the cocaine to wear off. He was a mule. He packed his rectum with balloons of cocaine to transport across the country. Drug mules will swallow balloons or tied-off condoms full of cocaine or heroin in order to smuggle them into the country. The best way to identify them is by x-ray or CT scan – cocaine is about the same density as stool whereas heroin is closer to the density of air. In order to get the balloons out, it is best to start with a standard laxative; oil-based stool lubricants can break down some of the rubber/plastic balloons risking balloon rupture in the colon and endoscopic methods or enemas can risk breaking the bags open. In this patient’s case, we used laxatives to get risk of the remaining bags and enemas to wash out any remaining cocaine from the broken bag.

For the patient this morning, his tox screen was negative for cocaine and was just positive for opioids, fentanyl, and cannabinoids which has become a fairly routine finding in patients presenting to the ER with delirium, coma, or cardiorespiratory arrest.