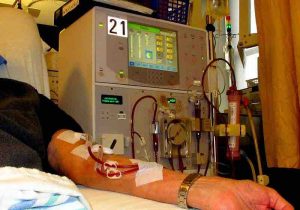 End-stage renal disease has been driving me crazy recently. When no one else will dialyze you, the hospital has to. There’s this thing called EMTALA law that requires us to treat you if you show up in our emergency department. Let me tell you about a few of our more exasperating patients that could fill out the entire cast in a theater of the absurd. In order to prevent being presented with a subpoena from the HIPAA police for violating patient confidentiality, I’ve made a few changes to the details, but not too many.

First case is a lady who decided that what she really wanted from Santa for Christmas was a new Glock handgun. The perfect fashion accessory for the woman who has everything. She was really proud of it so she showed it off to all of her friends at her dialysis center. The problem is that the dialysis center had a zero tolerance policy for patients bringing in hand grenades, surface-to-air missiles, nuclear bombs, and other weapons into the dialysis center. So she was banned for life from returning. Because she still needed dialysis that day, she came to the emergency department and got admitted. And we dialyzed her. And for a hospital, once you dialyze a patient, you own them forever. So it became our problem to arrange for regular 3-times a week outpatient dialysis. But the word got out and none of the other dialysis centers in town would take her. So, we were stuck with doing her dialysis. But the problem is, we are certified as an inpatient dialysis unit and not as an outpatient dialysis unit. Therefore, her insurance company said that the only way they would pay us to dialyze her was if she was an inpatient.  So, rather than having her just show up 3 days a week in the dialysis unit, get dialyzed , and go home, we had to admit her. The problem is that the insurance company wouldn’t pay for an elective hospitalization for renal failure, only an emergency hospitalization for renal failure. The only way we could get paid was to have the patient come into the ER, be seen by the ER physician, get labs to prove that her potassium was too high and her bicarbonate was too low, get admitted to the hospital, have a resident do an H&P and admission orders, get a nephrology consult, get dialyzed, and then have the admitting service do a discharge summary. Fortunately, after a couple of months, one of the private dialysis centers came through and accepted her… but only after we had proven that she wasn’t packing a gun any more by going through the metal detector in the emergency room every Monday, Wednesday, and Thursday for 8 weeks.

Second case is a guy from Nicaragua who decided to come visit his son in the United States. The only problem was, he didn’t have a passport. And his kidneys didn’t work. So, he jumped the fence in Texas and hitched a ride to Central Ohio. A couple of months later, he ended up in our emergency room with uncontrolled hypertension and kidney failure. We dialyzed him… and then we owned him. He got a dialysis access fistula but since he was an undocumented foreign national (the politically correct term for illegal immigrant) with no health insurance, no dialysis center would take him. And so now he comes into the ER every Tuesday and Friday and gets dialyzed. He needs medications for his blood pressure and his other medical problems but he can’t afford to buy them so he doesn’t take them. It turns out that this is not such an infrequent occurrence. What one of the private hospitals in Columbus does is when they get a patient like this, they don’t want to have to mess with doing the dialysis so the hospital actually pays a private dialysis center to do the dialysis. A hospital in Chicago tried to deal with a similar situation by arranging for their patient to be deported but there was such a public opinion outcry that they backed off. Since we are a State hospital, we can’t pay for a private dialysis center to do dialysis on an undocumented foreign national (lest it be perceived we are using taxpayer dollars to pay someone to dialyze an illegal immigrant) and we don’t want to risk the public relations nightmare of deporting someone’s poor grandfather because we won’t treat his medical problems.

The third patient got off of a plane at John Glenn International Airport after a long flight from Kenya. She hopped in a cab and came straight to our emergency department because she needed her regular dialysis. It seems that she sort of forgot to check the box on the visa form about having end-stage renal disease and needing dialysis three times a week. She wasn’t going to get back on the plane so we admitted her and dialyzed her… and then we owned her. Fortunately in her case, a local church group raised dialysis money and one of the local private dialysis centers took her on a cash basis.

In these situations, no one wants to pay for the dialysis for these patients. So what happens? We all pay for it. Because even though our hospital covers the cost of dialysis, we do it using the margin that we make from all of the insured patients, Medicare patients, and Medicaid patients that come through our doors. And it is the same for every patient that we take care of who is uninsured. Their care is paid for by everyone who pays payroll taxes and health insurance premiums. So when we dialyze them, American owns them.