The results of the annual residency and fellowship match were just released and once again, there were specialties that were losers and those that were winners. But if you dig into the data, there is some pretty interesting information that says a lot about the economics of physician career choices.

On the other end of the spectrum, there were 4 specialties that once again filled their available positions with 50% or fewer U.S. medical graduates: pathology, internal medicine, family medicine, and neurology. As in the past, most of the open residency positions were able to be filled by foreign medical students.

As a general rule, subspecialty fellowships are less competitive than residencies with about twice as many fellowship positions available each year as there are U.S. medical graduates applying to them. Although many specialties offer different types of fellowships, the largest number of fellowships are in internal medicine. Once again, there were 4 subspecialties that had the highest percentage of available fellowship positions filled by U.S. medical graduates: gastroenterology, cardiology, pulmonary & critical care medicine, and hematology & oncology.

These are also the most highly paid specialties in internal medicine with annual salaries of more than $320,000.

Just like last year, there were 4 subspecialties that had a very hard time attracting U.S. medical graduates: nephrology, geriatrics, endocrinology, and infectious disease. This is why in a previous post, I proposed that these are the most valuable specialties in your hospital since we will soon be facing a significant shortage of these physicians.

What are the odds of getting in? 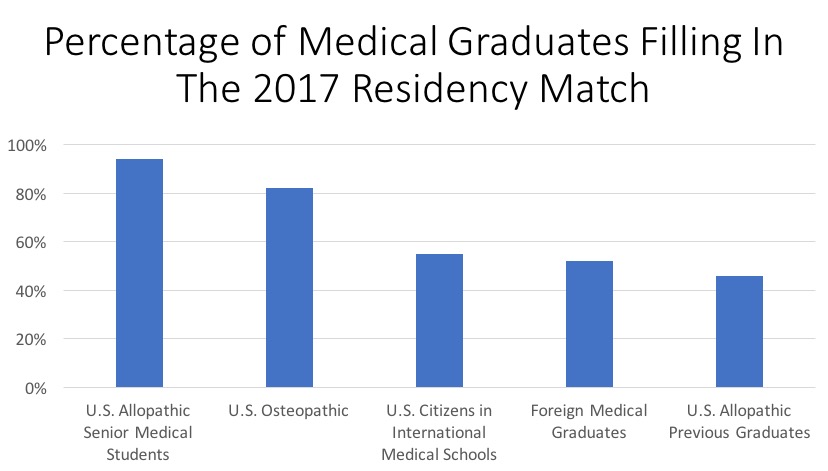 What can we conclude?

The usual laws of supply and demand of capitalism do not apply to physician specialties. Normally, if the demand for a particular service exceeds the supply of people who offer that particular service, then the cost of the service goes up and consequently, the income of the people providing that service also goes up. However, with medicine reimbursed using an RVU system, there is a disconnect between supply and demand in that the cost to see a specialist stays the same regardless of the demand. Even if he was the last endocrinologist on the planet, that endocrinologist would have the same annual income as he does right now since he is paid by a fixed price per RVU and there is a fixed number of RVUs that can be generated during a work-day. The RVU system has a lot of advantages but one of its disadvantages is that it disrupts the free market system.

When it comes to specialty choices, medical students follow the money. Those specialties that have the highest annual incomes are the hardest to get into. Those that pay less are the easiest to get into. Although there are undoubtedly other factors that motivate specialty selection, the anticipation of maximized future income appears to be pretty important.

We can continue to anticipate a future shortage of nephrologists, geriatric specialists, and  infectious disease specialists. Very few U.S. medical graduates are entering these subspecialties. Endocrinology is at least back-filling with foreign medical graduates. I envision a future when hospitals will have to increasingly subsidize nephrologists and infectious disease doctors and we could see bidding wars between hospitals for these increasingly scarce specialists.

Physicians have a very secure career future. In the United States, we can’t home-grow enough doctors and have to import a huge number of them in the way of foreign medical graduates. Currently, 25% of U.S. doctors went to medical school outside of the United States. If you can get into a U.S. medical school, you have about as good of job security as exists in our economy.