You would think that August would bring a lull in the work of U.S. influenza epidemiologists. But August is when we get some of the most important information that predicts what our winter flu season will look like. And the projections are a little scary this year.

The best predictors of North American influenza in our winter is Australian influenza during our summer. Normally, influenza season in Australia starts in April and runs through October, corresponding with winter in the Southern Hemisphere. What happens with influenza in Australia usually fairly closely matches what happens later in the year in the United States. Thus, by examining the epidemiological data from the Australian Department of Health’s Influenza Surveillance, we can predict when influenza cases will start to be seen, what age groups will be affected, what serotypes will be predominant, and what severity will occur here in the United States and Canada.

Over the past 3 influenza seasons, we have seen an inverse relationship between COVID cases and influenza. One of the primary reasons for fewer influenza cases when COVID cases increase is social distancing and mask-wearing to prevent COVID. It turns out that these measures help prevent COVID but they are even more effective to help prevent influenza. We can see that effect in the 2019-20, 2020-21, and 2021-22 influenza seasons. 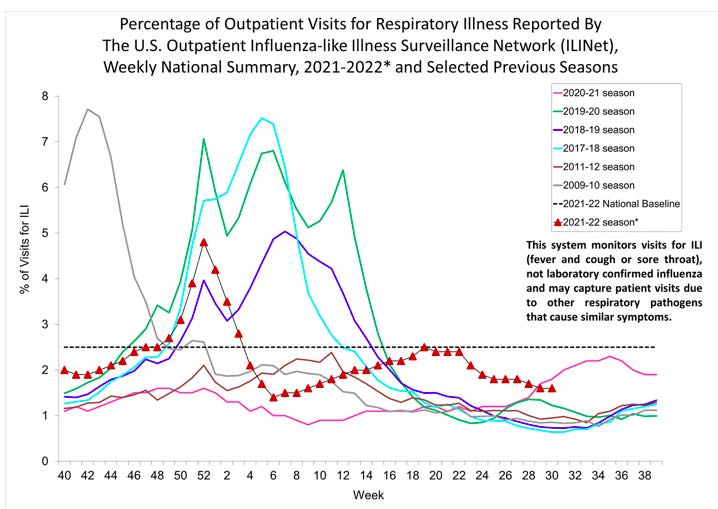 The graph above shows seven previous influenza seasons in the United States. The 2019-20 influenza season (green line) started off quite severe with sustained high numbers of cases from December through March. The onset of the COVID pandemic in the United States in March 2020 marked the closure of schools, work from home initiatives, and public masking. This coincided with a precipitous fall in influenza-like infections at the end of March.

The 2020-21 influenza season (pink line) was the mildest in recent history with only a small peak in cases of influenza-like infections in November and December. At this time, social distancing and masking were more ubiquitous and the COVID vaccines were not yet widely available. It was not until the summer of 2021 that influenza-like infections began to rise – this was a time when COVID vaccines were widely available and it was generally believed that the end of the COVID pandemic was in sight. Consequently, mask mandates were discontinued, children returned to schools, and workers returned to their workplaces. This created conditions that allowed influenza to have a summer rebound.

The 2021-22 season is in red with red triangles. It peaked in December, much earlier than usual. This coincides with the rise in case numbers of the Omicron variant of COVID that caused people to resume masking and social distancing in December. Once these measures to prevent the spread of COVID went back into effect in December 2021, the frequency of influenza-like infections fell.

The exceptional influenza season was the H1N1 outbreak in 2009-10 when cases began to increase in August and peaked in September and October. This represented an unusually early influenza season that caught physicians off-guard. Making matters worse, this particular H1N1 strain had not circulated for decades and was not predicted to appear that season with the result that it was not covered by that season’s flu shots. These factors together resulted in an unusually large number of cases and large numbers of deaths, particularly among younger people who had no natural immunity to H1N1.

What we are learning from Australia

When will influenza season start? 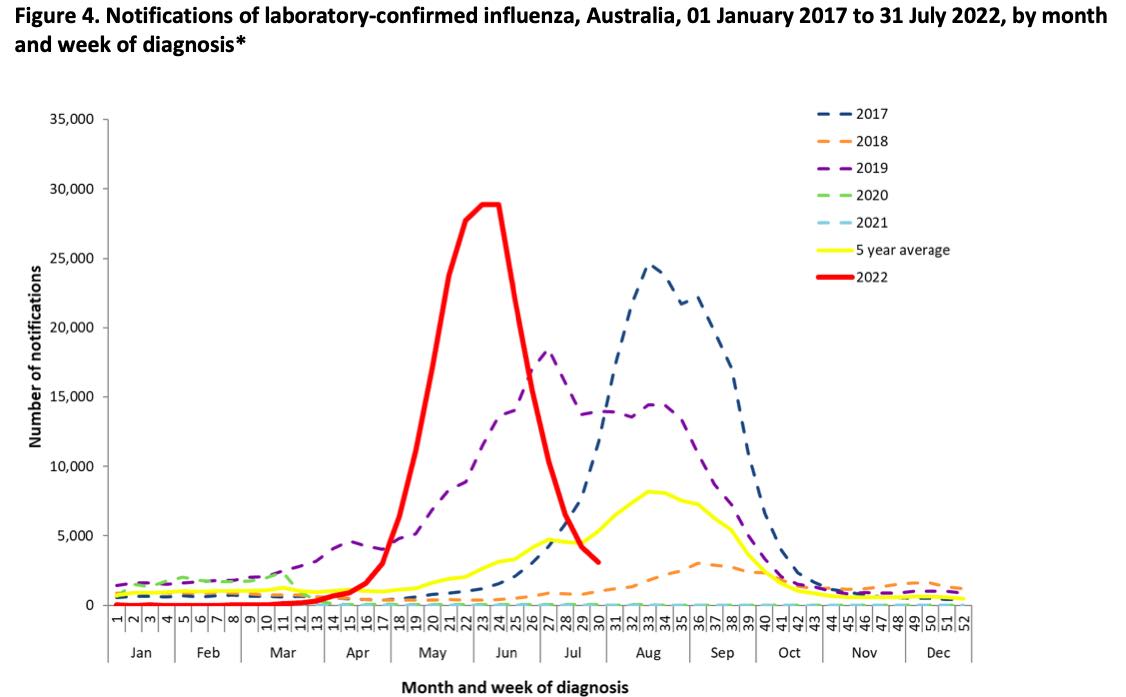 The current influenza season is in red. It began much earlier than in past years and also peaked much earlier. Cases began to rise in late April which corresponds to late October in the Northern Hemisphere. Cases peaked in late May in Australia which corresponds to late November in the U.S. By late July, the Australian influenza season was pretty much over – this would correspond to late January in the United States and Canada. So based on these data, we should expect to see influenza cases start to increase in October 2022 with peak numbers in November and December 2022.

How severe will influenza be this year? 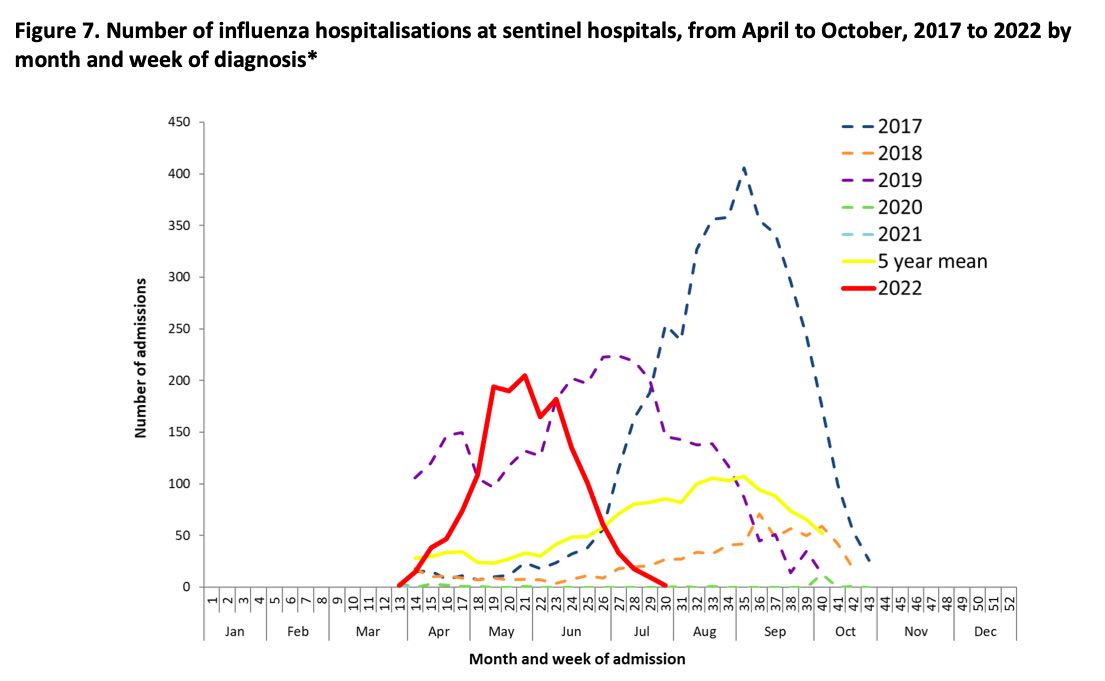 Based on this data, in the United States, we should expect influenza-related emergency department visits and hospitalizations to peak in November and December 2022.

What ages will be most affected?

A unique finding during the current Australian influenza season has been the propensity to affect children. The graph below shows the number of laboratory-confirmed influenza cases by age. 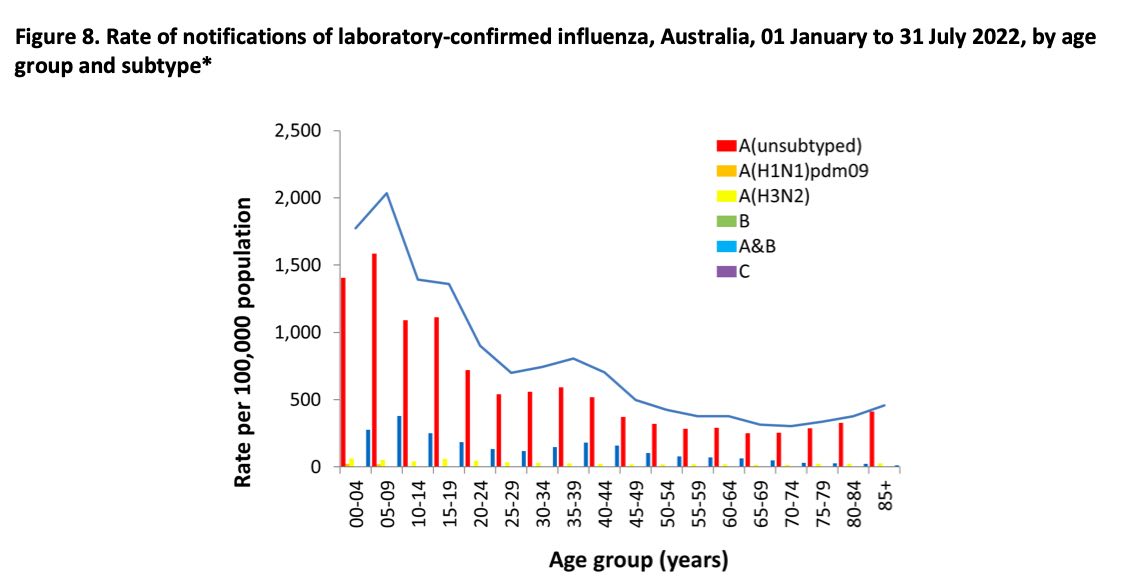 The largest case rates have been in people under age 20. This would predict that U.S. pediatricians will be seeing more influenza than U.S. internists this season.

Will the influenza vaccine cover it? 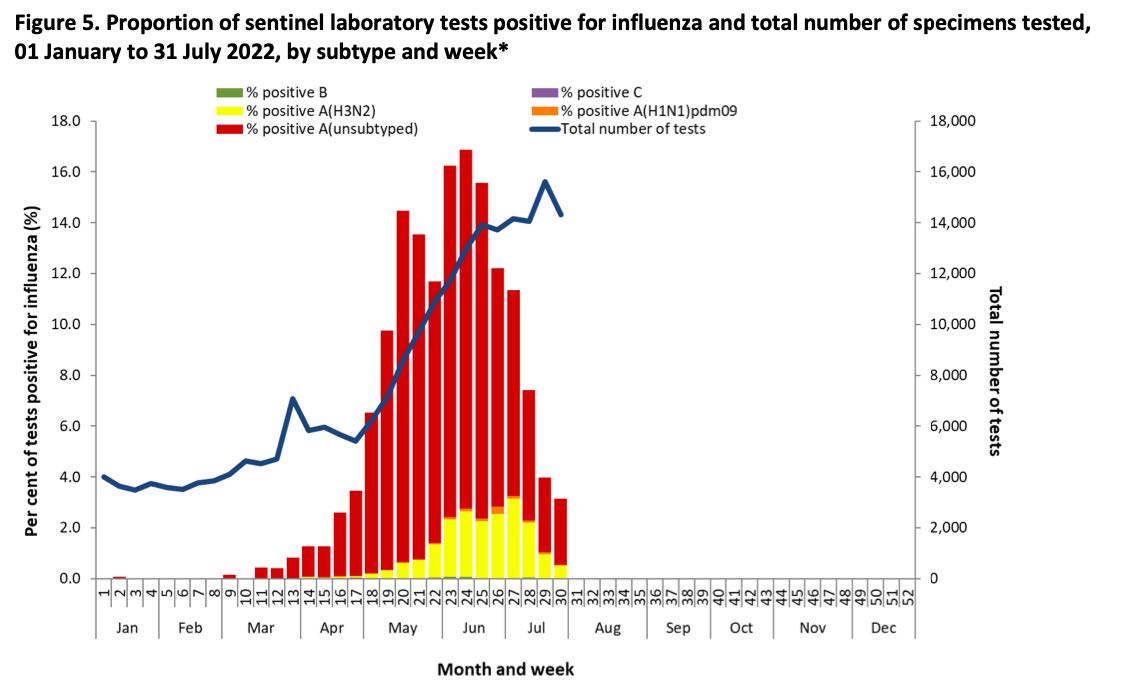 The seasonal influenza vaccines in Australia this year included the following serotypes:

What we should do in the U.S.

Based on the Australian experience, there are several steps that we should take to prepare ourselves for the 2022-23 influenza season:

No one can predict the influenza season with 100% accuracy. But if historical trends follow, then the U.S. will likely experience a similar season as Australia. Given that most Americans are starting to relax as the COVID-19 case numbers fall, we could be especially vulnerable to influenza this year, particularly if it comes early and preferentially affects children as expected.