My grandmother was the first non-white child to attend Atlanta Public Schools. Three years ago, on Memorial Day, I wrote a post about her. It has always been one of my favorite posts in the 6 years of this blog. Today on Memorial Day, I am re-posting it in her memory. I hope you enjoy it.

The story begins in 1873 when my greatgrandfather was born in the Canton region of China. His last name was Jung and he adopted the Anglicized first name, Joe, when he arrived in Portsmouth, Virginia at age 12 with his uncle as immigrants to the United States seeking a better life. He eventually moved to Elberton, Georgia where he ran a laundry and became president of the Chinese Merchant’s Association of America. He married Leila Colson, my greatgrandmother and together, they raised their family in Atlanta, Georgia. Their oldest child was Jessie Ruth Jung, my grandmother, born in 1902. 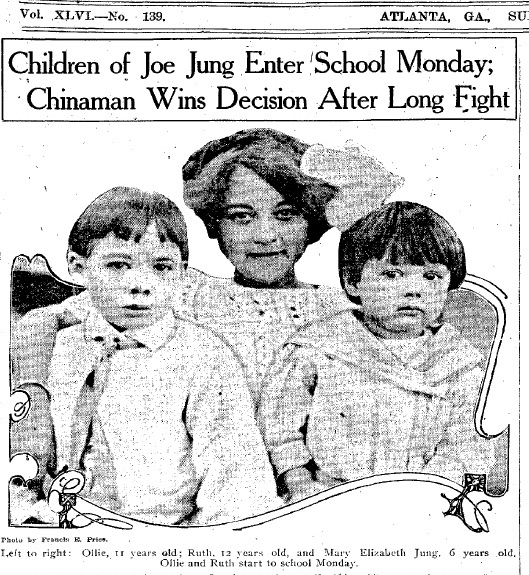 But sometimes heroes pay a terrible price for being heroes. Although my grandmother, her brothers, and her sister were allowed to attend the whites-only school, they were not allowed to be a part of Atlanta whites-only society. It was not easy to be of mixed race in the south at the turn of the century, regardless of the specific race. As Chinese, they were considered to be inferiors. They were ostracized and lived apart from the rest of the community. Joe Jung eventually died and then together, my grandmother and her siblings all agreed to change their last name from Jung to Young. They disavowed their Chinese ancestry in order to escape the prejudice and discrimination that they experienced as children and still as young adults. The Chinese heritage of the family was hidden and never again mentioned.

In fact, my father lived his entire life and died at age 55 never knowing that he was a physician of Chinese ancestry. Eventually, all of the Young brothers and sisters died and at my grandfather’s funeral, the last surviving spouse of one of the Young siblings told the secret story that she had sworn to her husband, Ollie (my grandmother’s brother), to never tell. To their generation, their Chinese ancestery was a terrible secret that they were ashamed of. It had only brought them the pain and scorn of being considered second class people. But a hundred years later, my family celebrates and takes pride in the fact that we have such a rich racial and cultural heritage.