Using the definition that value = quality ÷ cost, Americans get the least value in healthcare of all nationalities in the world. Per OECD data, U.S. healthcare cost per person is the highest in the world at $11,072 per year; the next closest is Switzerland at $7,732. But the U.S. trails other peer countries in most measures of quality of medical care. In other words, we pay more and get less. 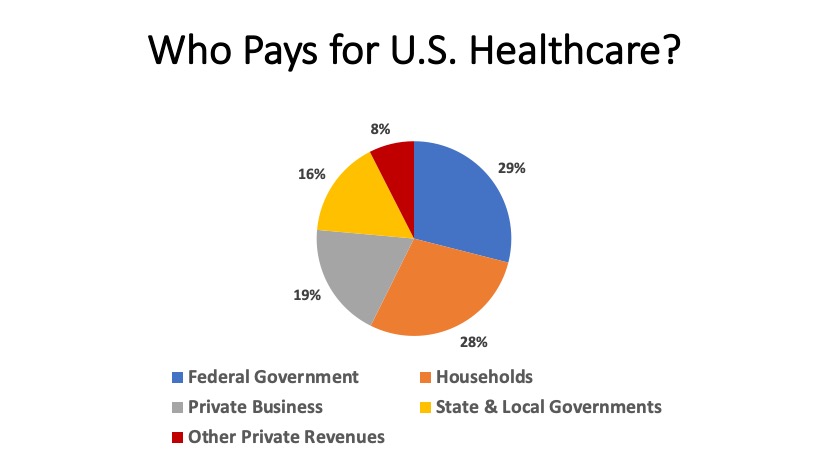 One of the problems with our existing national health plans is that they all too often pay for health care for preventable medical conditions; had these conditions been prevented in the first place, then the overall cost to society would be less. For example, if an uninsured person does not have their hypertension and diabetes diagnosed and treated, then they become a financial burden on society when they develop kidney failure and require dialysis (Americans requiring dialysis are automatically eligible for Medicare, and thus paid for by taxpayers). Or if an American has unrecognized hepatitis C at age 45, that person can develop cirrhosis requiring a costly liver transplant later in life when they are now over age 65 and on Medicare. Or the low income woman who lacks access to birth control has an unintended pregnancy that results in delivery costs charged to Medicaid and child healthcare costs charged to CHIP.

Although I believe that the United States will eventually have a national health plan akin to “Medicare for all”, there are too many powerful economic and political forces that pose a barrier to overnight adoption of a national health plan. Most notably, opposition can be expected from health insurance companies, pharmaceutical companies, some hospitals, and some doctors who all benefit from private health insurance (which generally pays more for any given medical service than Medicare does).

Therefore, I believe that the first step toward improving U.S. health outcomes while reducing U.S. health costs per capita should not be “Medicare For All” but should instead be “Preventive Care For All“.

The Affordable Care Act already requires Health Insurance Marketplace plans and Medicaid to provide a group of preventative services to all covered individuals, without co-pay. For adults, this includes services such as 14 different vaccinations, blood pressure & diabetes screening, and HIV prevention medications for high-risk persons. For women, this includes services such as birth control, breast cancer screening, and bone density screening. For children, this includes services such as vaccinations, well-child visits, and autism screening. People who have Medicare, Medicaid, CHIP, or commercial insurance through a Health Insurance Marketplace plan already get preventive care at no additional out-of-pocket costs. The problem is that uninsured Americans do not have access to preventive care, unless they pay for it with their own money. So, who are these uninsured?

Currently, according to a report by the Kaiser Family Foundation, there are about 27 million uninsured Americans who are nearly all between ages 18 -64. Children of parents without commercial insurance are mostly eligible for healthcare coverage through CHIP and adults 65 and over are eligible for healthcare coverage by Medicare. In short, the typical uninsured person in the United States is non-white, low income, employed, and lives in a South or Mountain West state: 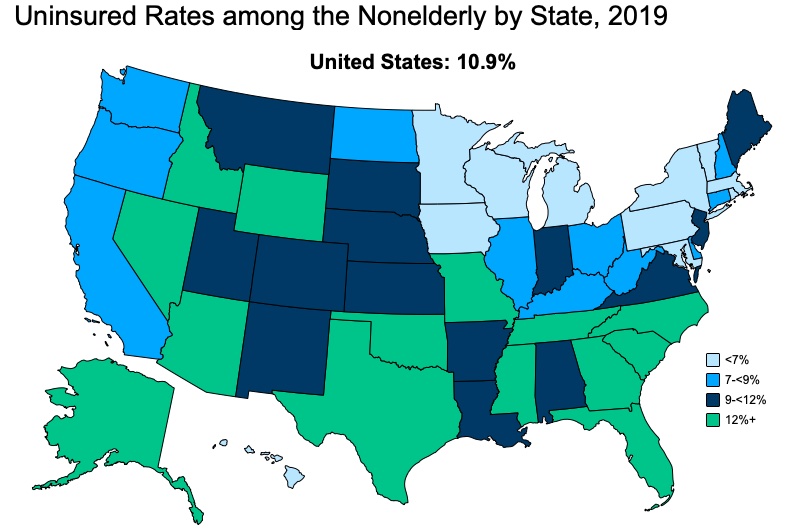 When an uninsured person is discovered to have a medical condition that requires treatment, such as kidney failure, unintended pregnancy, or metastatic breast cancer, one of the first things the hospital will do is to get that person enrolled in Medicaid or Medicare in order to cover the costs of chronic dialysis, pregnancy, or chemotherapy. For those patients who are not eligible for Medicaid or Medicare, the hospital will generally provide “free” medical care. However, nothing in health care is really free, so, the hospital has to charge more to the commercial insurance companies in order to pay for treating the uninsured. Consequently, employed American taxpayers eventually end up paying for medical care for the uninsured, either directly through taxes or indirectly through health insurance premiums.

The costs of preventable medical conditions is staggering. Dialysis costs about $90,000 per year per person. Delivery costs of an unintended pregnancy is about $15,000 (and that does not include costs of pre-natal care or health care for the next 18 years for the child). The cost of treating breast cancer in the 24 months following diagnosis is $72,000 for stage I but $183,000 for stage IV.

However, the cost to diagnosis hypertension and diabetes (before they cause kidney failure) is about $40/year. The cost of birth control pills to prevent unintended pregnancy is about $200/year. the cost of a mammogram is about $300/year. When it comes to preventable medical conditions, for the American taxpayer, it is a “Pay me now or pay me later” proposition… and it is a lot cheaper to pay for preventive care now rather than pay for the medical condition later.

How to pay for it

The greatest resistance will come from those opposed to increasing taxes to pay for someone else’s health care. It is true that in the short run, Preventive Care For All will require increased federal expenditures that will consequently require increased taxes. I would argue, however, that in the long run, Preventive Care For All will pay for itself by:

Seen this way, Preventive Care For All is a national investment that will cost us more now but more than pay us back after several years.

Humans have created a myriad number of ways to tax ourselves but taxes can be broken down into three basic types: (1) taxes on what you earn, (2) taxes on what you buy, and (3) taxes on what you own. Healthcare in the U.S. is primarily funded by the first of these types, taxes on what you earn. Commercial health insurance is usually paid by a combination of employee pay deductions to cover premiums for employer-sponsored health insurance plus an employer contribution that is derived from the employee’s benefit package. Medicare is paid for similarly by employee and employer payroll taxes. Payroll taxes are divided into two buckets: Social Security at 12.4% (which is only taxed on the first $142,800 in income) and Medicare at 2.9% for people making less than $200,000/year and 3.7% for those making greater than $200,000/year. Medicaid is a bit different and is paid for jointly by the Federal and State governments. I would propose paying for Preventive Care For All by increasing the Medicare component of payroll taxes.

Inevitably, progressives will argue that increasing payroll taxes on earned income hurts low-income persons. My counter argument is that by funding through payroll taxes, the wealthy pay more than the poor and furthermore, Preventive Care For All will primarily benefit low-income families.

Equally inevitably, conservatives will argue that increasing taxes takes more money from those Americans with higher incomes. My counter argument is that by funding through payroll taxes (rather than regular income taxes), all American workers contribute by an equal proportion of income and furthermore, Preventive Care For All will ultimately reduce future Medicaid and Medicare expenditures, offering the possibility of decreasing payroll taxes in the future.

Americans hate taxes, and I am no different. However, if you take the view that premiums Americans pay for employer-sponsored health insurance are simply a tax paid to a commercial insurance company rather than a government, then it is clear that we are already paying an enormous tax bill for healthcare in the United States. The best way to reduce that tax bill is to pay for prevention so we do not have to pay for disease.

How to implement it

There will be groups that object on moral or philosophical grounds, such as anti-vaxxers who object to using government money to cover vaccinations and some religious groups that will object to using government money to cover birth control. My response to the anti-vaxxers is that they are just nuts. My response to the religious objectors is that America’s abortion problem is mostly an unintended pregnancy problem and reducing unintended pregnancies is the best way to non-controversially reduce abortions.

Another implementation barrier would be deciding who would provide the preventive care? It would be difficult to turn this over to existing primary care private physician practices. Many of these physicians already do not accept Medicaid patients due to the low reimbursement and a preventive care program paid by the Federal government would likely also be hard to break even on. Furthermore, once a full-service primary care physician establishes a preventive care relationship with an otherwise uninsured patient,  that physician will feel morally (and possibly legally) responsible to treat any chronic medical conditions that the physician identifies, even if he or she will not be paid for that care by the uninsured patient.

Personally, I believe that this type of preventive care could be ideally provided by groups of nurse practitioners, physician assistants, and nurse midwives. Preventive care is largely protocol-driven which is ideal for advance practice providers. Furthermore, there would not be a moral or legal requirement for such a preventive care office practice to manage chronic medical conditions or answer sick-calls from patients. Instead, these practices would function similarly to health screening fairs currently sponsored by hospitals, religious groups, and social service organizations.

“An ounce of prevention is worth a pound of cure”… Benjamin Franklin: February 4, 1735

By preventing many chronic medical conditions and by screening to identify other medical conditions early, Preventive Care For All would reduce overall American healthcare costs, keep lower income workers in the workforce, and improve the quality of health in the United States. In other words, Preventive Care For All would improve the value of American health care. We would do well to heed the words of one of America’s Founding Fathers…