Each year, hospital quality departments select a group of metrics to monitor for quality performance. It is time for hospitals to focus on adenoma detection rates as one of these metrics. Adenomas are pre-cancerous polyps found during colonoscopy. By removing polyps found on screening colonoscopy, the risk of colon cancer can be substantially reduced.

If the incorrect diagnosis code is linked to the colonoscopy CPT code, then commercial insurance companies may consider the procedure to be a diagnostic colonoscopy in which case, the patient could have a sizable co-pay or the cost of the procedure could be subject to policy deductible limits. Insurance companies have been known to deny full reimbursement for a screening colonoscopy if the physician lists a gastrointestinal diagnosis code (such as GI bleeding), if the patient is at high risk for colon cancer (such as having a family history of colon cancer), or if the patient has a personal history of colon cancer or polyps. If the colonoscopy is being done to follow up on an abnormality found on another colon cancer screening test (such as a stool DNA test or a fecal occult blood test), then that colonoscopy is generally considered to be a diagnostic colonoscopy and is therefore subject to patient co-pays and deductibles.

Because of the significant implications for patient co-pays and deductibles, it is important that patients understand up front the financial implications of choosing any colon cancer screening test other than a colonoscopy since if that initial test is negative, the patient will likely be responsible for some or all of the cost of the subsequent colonoscopy to follow-up the abnormal results. It is also important that physicians and coders select the proper CPT code and diagnosis code in order to prevent the patient from being incorrectly billed for the procedure.

A study published in JAMA this month found that patients undergoing screening colonoscopy by physicians who have a low adenoma detection rate were more likely to be diagnosed with colon cancer later in life. The basis for these finding is that colon cancers arise from adenomatous polyps. Thus by identifying and removing adenomas, subsequent colon cancers can be prevented. However, colonoscopy and identification of polyps is a skill that is very operator-dependent and not all physicians are equally skilled in the procedure. 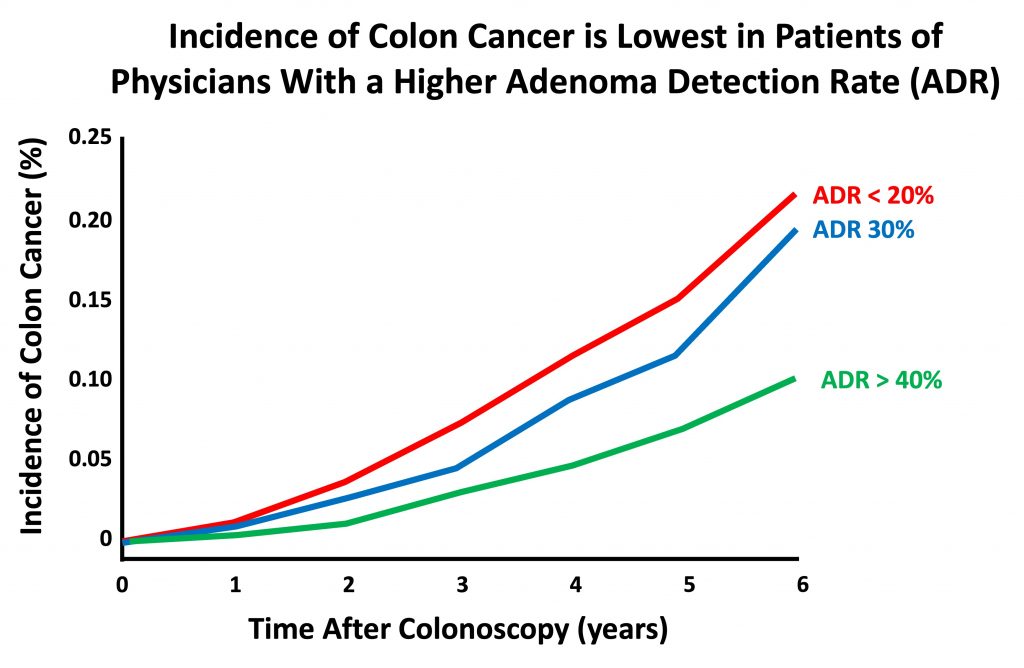 The ideal adenoma detection rate is dependent on the population of patients screened. For example, there are gender differences in the presence of adenomas as well as the risk of death from colon cancer. Men have a 25% higher rate of death from colon cancer than women. Other colon cancer risk factors include older age, African American race, history of kidney transplant, tobacco use, alcohol consumption, diabetes, obesity, and diets heavy in red meats. Thus, the demographics of the patient population undergoing screening at any given hospital as well as by any given physician can affect the percentage of patients who undergo colonoscopy and have an adenoma.

So what is the optimal adenoma detection rate? As a general rule, a minimum ADR of 20% for women and 30% for men undergoing colonoscopy should be expected. For a physician with a mixed-gender patient population, the minimum ADR can be simplified to 25%; this is the minimum ADR recommended by the European Society of Gastrointestinal Endoscopy. For physicians with patient populations at higher risk of colon cancer, these thresholds may need to be increased. For example, a physician who primarily performs screening colonoscopy on African American men over age 65 may need to have a higher ADR threshold than a physician who primarily performs screening colonoscopy on Caucasian American women under age 65.

What should hospitals do with physicians who have a low ADR?

A disadvantage of retrospective video proctoring is that if the proctor sees a polyp missed by the original physician who performed the colonoscopy, then that patient will need to be called back for a second, diagnostic colonoscopy. Not only does this inconvenience the patient, but diagnostic colonoscopies generally have higher patient co-pays than screening colonoscopies. An alternative to procedural proctoring could include remedial training in colonoscopy, such as the “return to practice” training programs often used for physicians who have been away from the active practice of medicine for an extended period of time. Another option for physicians with an excessively low adenoma detection rate is suspension of screening colonoscopy privileges.

In addition to the physician’s own colonoscopy skill, patient factors can contribute to a low ADR. One reason that adenomas may be missed is because of a poor colon preparation. Colon preps are unpleasant for the patient and often difficult for the patient to complete. Many patients with a poor colon prep at the time of their screening colonoscopy will refuse to repeat the prep and return for a second procedure at a later date. Every effort should be made to ensure that the patient has a satisfactory prep the first time. One barrier to adequate colon preps is that the gastroenterologist or surgeon performing the colonoscopy usually does not see the patient in the office prior to performing the colonoscopy and the preps are often ordered by the patient’s primary care physician. Institutional standardization of the specific colon prep to be used can eliminate primary care physicians from ordering a less effective prep. The use of split-dose preps, low fluid volume preps, and hospital-employed “patient navigators” can improve patient compliance with preps and reduce the rate of poorly prepped colons.

Another reason for a low ADR can be inadequate patient sedation. In the past, most colonoscopies were performed by using ‘moderate sedation’, that is, sedative medications administered by the physician performing the colonoscopy that result in the patient being sleepy but arousable. It can be difficult to perform a thorough colon visualization if patients are insufficiently sedated. Because of this, more colonoscopies are now being performed using ‘deep sedation’ that causes the patient to be asleep and less arousable during the procedure. Deep sedation requires a second provider to administer the sedative medication, generally an anesthesiologist or a CRNA. Deep sedation is often preferred for colonoscopies performed on patients with co-morbid medical conditions such as sleep apnea, COPD, or heart failure. It may also be preferred in patients who are highly anxious, have low pain thresholds, or who have been difficult to sedate in the past. Increasing the availability of deep sedation for screening colonoscopies is one tactic that the hospital can take to improve its overall adenoma detection rate.

Everyone wins with a high ADR

A high adenoma detection rate means more colon cancers are prevented and that is a win for the patients. A high rate also means that fewer colon cancers are missed and that is a win for physicians who can avoid costly medical malpractice lawsuits for failure to diagnose. And a high rate is a win for the hospital which can avoid negative publicity from missed cancers. It is time for the ADR to be a routine quality measure in our hospitals.