Currently, 2 billion people are infected with tuberculosis, about one-quarter of the world’s population. It lies dormant in most people but every year, it causes active disease in 10 million people and 1.6 million die of it. It is the number one cause of infectious disease-related death in the world. In the United States, healthcare providers are required by law to report cases of TB to health departments and the health departments in turn do contact tracing to identify and test others who could potentially have been infected. Because of this reporting requirement, we have very good epidemiological data about tuberculosis in the U.S. 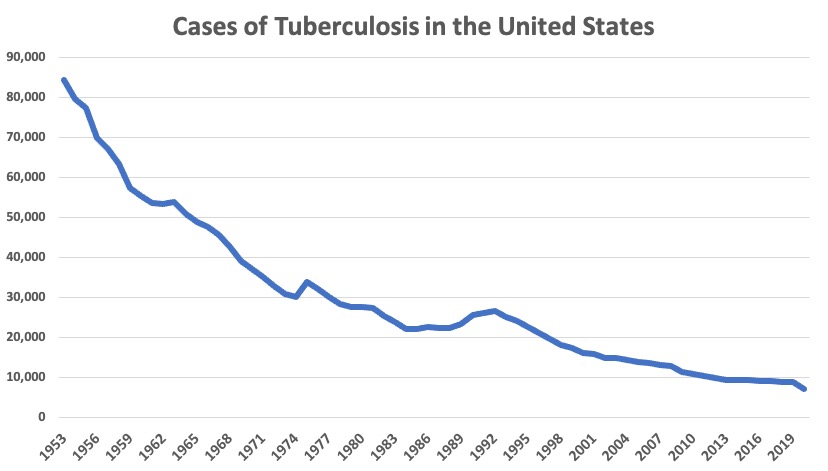 Tuberculosis control in the United States has generally been a success. The number of new cases of TB per year has dropped from 84,304 in 1953 to 8,916 in 2019, a nearly 10-fold drop in cases. Because the United States total population has grown during this time period, the reduction in new cases per 100,000 population has dropped even more dramatically from 52.6 in 1953 to only 2.7 in 2019, a nearly 20-fold drop in case rates. This is a testament to the effectiveness of public health measures. Indeed, quarantining and the wearing of masks is nothing new – they have been our primary tool for controlling the spread of TB for more than a century.

The reduction in TB cases has not been linear. There was a spike in cases in 1975 that was largely related to a different surveillance case definition instituted that year and not due to an actual increase in TB in the United States. There was also an increase in cases in 1989-1992 that was primarily due to a surge in the number of people with AIDS in the U.S. But for the past decade, there has been a steady reduction in cases of TB in the U.S. by about 2-3% per year between 2010-2019. But then an unexpected thing happened in 2020. There was a 20% reduction in tuberculosis. 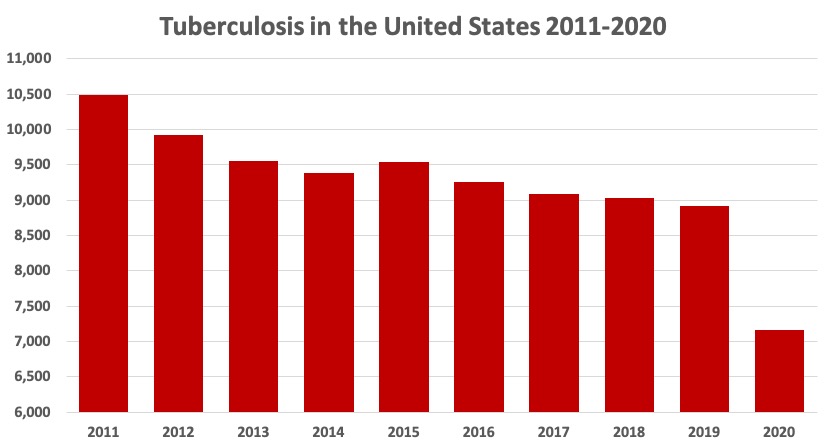 It turns out that COVID-19 has been our most powerful weapon yet in combating tuberculosis. The COVID-19 pandemic brought with it mandates of social distancing and face mask-wearing in public. These are reasonably effective means of controlling the spread of the coronavirus but they are even more effective in controlling the spread of other respiratory infections, including tuberculosis. Prior to 2020, the main indication for healthcare workers wearing N-95 masks was when caring for patients with known or suspected tuberculosis. Hospitals throughout the U.S. maintained a small number of “negative airflow” patient rooms, primarily to house patients suspected of having TB. But TB had become relatively rare to the point that most medical students do not encounter a patient with tuberculosis during their training; in 2019, there were only 150 cases of TB in the entire state of Ohio. 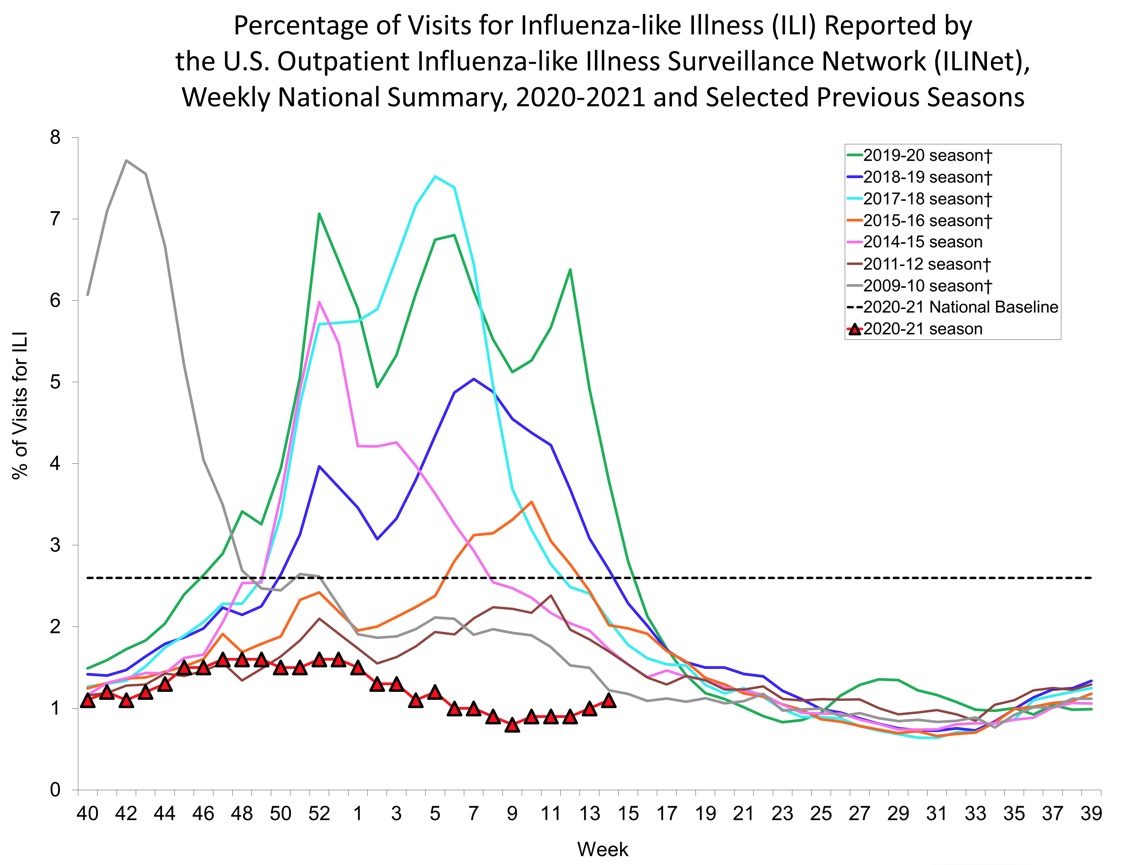 Not only have the infection control measures used to slow the spread of COVID-19 been effective in reducing tuberculosis, these measures have been even more effective in reducing influenza. The graph above is from the Centers for Disease Control showing that the incidence of influenza this season (red triangles) is by far the lowest of any year in the past decade.

With 2 billion people infected, tuberculosis will not be eliminated in our lifetime. But it appears that COVID-19 has given us an unexpected step forward in our efforts to reduce TB in the United States. Tuberculosis data reporting in the rest of the world is not as robust and in the United States so it will likely be a few years until we see if the same phenomenon seen in the U.S. in 2020 will also be seen in other countries.

Hopefully, another benefit of the COVID-19 pandemic will be the accelerated study of mRNA vaccine technology that could offer hope of future vaccines effective in preventing tuberculosis. Regardless, the reduction in TB last year has been a very thin silver lining in a very large dark cloud of COVID-19.