Overall, union membership in the United States has been steadily declining over the past 60 years. However, one of the consequences of the COVID-19 pandemic has been a resurgence of interest in doctor’s unions, especially among residents and fellows. In the past two months, residents at the Keck School of Medicine of USC, Stanford Health Care, and University of Vermont voted to unionize. Is a union in your hospital’s future?

The Bureau of Labor Statistics recently reported that in 2021, there were 14 million wage and salary workers in the United States who were members of a union. This equates to an overall union membership rate of 10.3%. Overall, union membership has dropped considerably over the past 70 years. 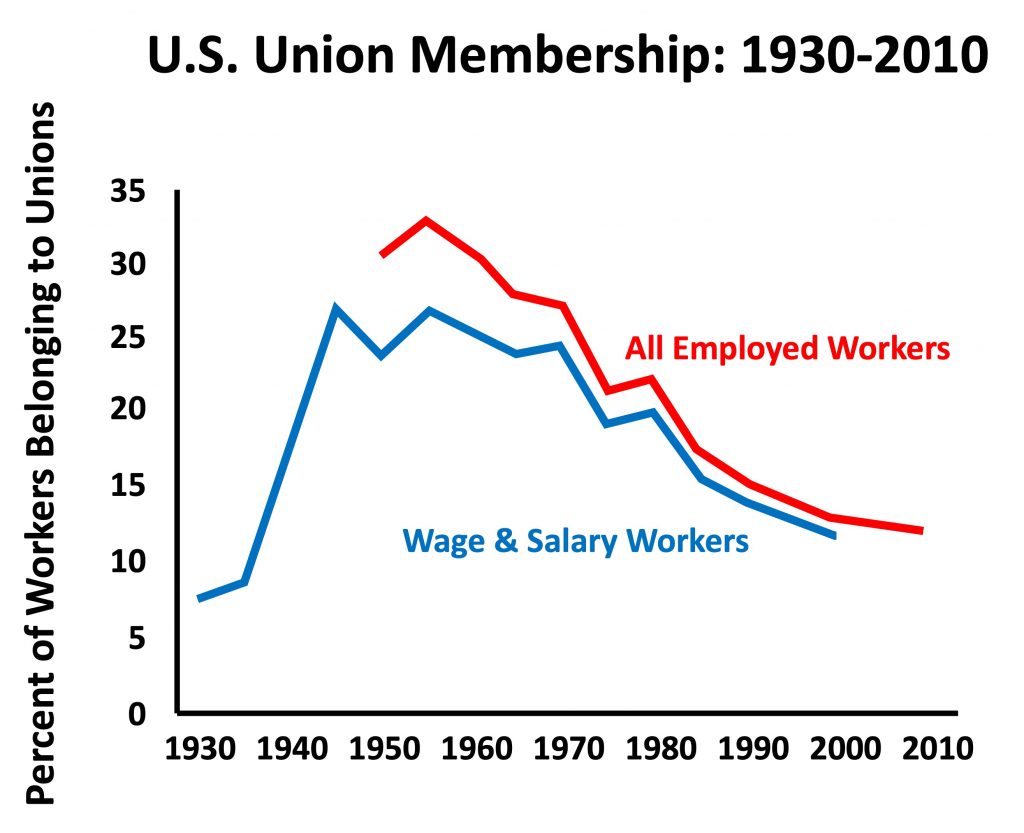 There are tremendous differences in the union membership rates for public sector workers (33.9%) versus private sector workers (6.1%). There are also profound geographic differences in union membership rates ranging from high rates in Hawaii (22.4%) and New York (22.2%) to low rates in South Carolina (1.7%) and North Carolina (2.6%). Physicians are less likely to be unionized than most other professions with approximately 5% of U.S. doctors belonging to a union. Residents and fellows comprise the largest group of physicians who are unionized and their numbers are growing.

The largest union of residents and fellows is the Committee of Interns and Residents (CIR), a part of the Service Employees International Union. In normal years, the CIR reports 1-2 hospitals have union organizing campaigns per year. However, with the COVID pandemic, that number has tripled. Currently, residents at about 60 hospitals nationwide are unionized with an estimated 15% of all U.S. residents belonging to unions.

The pros and cons of resident unions

The effect of resident unionization has not been well-studied. A 2021 study published in JAMA Network Open of 5,701 U.S. surgery residents found that unionized residents were more likely to have hospital-subsidized housing and more likely to have 4 weeks of vacation per year (as opposed to 2-3 weeks) than non-unionized residents. However, there was no difference in burnout, suicidality, job satisfaction, duty hour violations, mistreatment, salary, or educational environment between residents at unionized and non-unionized programs.

Residents and fellows hold a unique employment status – they are simultaneously trainees and employees of the hospital. They also have time-limited employment, unlike most American union members who can spend their entire employment career as union workers. Because of their unique status, there are advantages and disadvantages to residents unionizing.

The pros of resident unionization

The cons of resident unionization

American unions became empowered by the 1935 National Labor Relations Act (Wagner Act). This allowed workers to organize into closed shops (where union membership was a prerequisite requirement to employment),  union shops (where non-union workers could be hired with the requirement that they join the union within a specified amount of time), agency shops (where workers were not required to join a union but could still be charged union dues), and open shops (where workers were neither required to join a union nor pay dues). In 1947, the Taft-Hartley Act repealed some elements of the Wagner Act – closed shops became illegal and states were individually allowed to decide whether union shops and agency shops would be allowed.

The result of the Taft-Hartley Act was that some states passed legislation or state constitutional amendments to become “right-to-work” states. In these states, union shops and agency shops were not allowed and unions could only exist act open shops. The phrase “right-to-work” in essence means that workers had the right to work without having to join a union. 27 states have have right-to-work laws (red in the map below) and in addition, Delaware allows individual localities to make their own decisions about right-to-work. 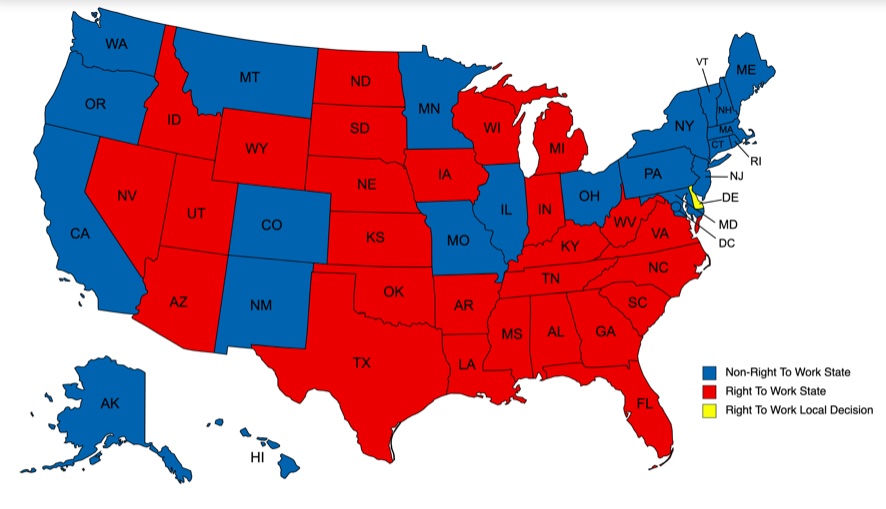 The vast majority of unionized residency programs are in non-right to work states, meaning that once the residency is unionized, future residents do not have a choice about whether or not they want to participate in the union or pay union dues.

A new era of physician unionization?

In the 1950’s, about 75% of U.S. physicians belonged to the American Medical Association. Today, that number is only about 17%. The AMA is not a union but it does play an important role in physician advocacy and lobbying. Today’s physicians have not felt that the AMA provides sufficient benefits to warrant membership and attendant annual dues of $450 per year. As a consequence, the AMA has less political and public health influence today than it had in the past. Some medical leaders have called for a new form of unionization for attending physicians to more strongly advocate for issues of importance to physicians such as gun control and vaccinations against communicable disease. Although a laudable idea, it is probably unrealistic.

However, the recent change in physician employment models resulting in most physicians now being hospital-employed rather than in private practice may change the appetite of some physicians to become unionized. As many specialties have had compensation become untethered to professional practice income, physicians in these specialties depend more on the wording of their hospital employment contracts for their salary and work hours. Anesthesiologists, hospitalists, critical care physicians, and emergency medicine physicians are perhaps most notable. For example, tying hospitalist RVU production too tightly to compensation can work counterproductively to hospital goals of patient length of stay, readmission rates, and patient satisfaction scores. For shift work-based physicians, unionization may become appealing if the physicians perceive that their hospital is not responsive to appeals to improve working conditions or pay competitive salaries and benefits.

Physicians whose incomes are more closely tied to their RVU production (such as surgeons, gastroenterologists, and ophthalmologists) are likely to feel less benefit to unionization as they would want to preserve their ability to tie high incomes to work effort. Also, when there are relatively few physicians in a specialty at a hospital, they already command a great deal of power and may not perceive a benefit to unionization. For example, if there are only 2 orthopedic surgeons at a hospital, just one of them threatening to leave to go to another hospital on the other side of town can be enough for the hospital to acquiesce to their demand to contract with a different joint implant vendor.

For the foreseeable future, there is projected to be physician shortages in most specialties. This results in a state of perpetual imbalance between supply and demand for physicians. A hospitalist who is not happy with their salary or required number of shifts per year at one hospital can easily get a job at another hospital within commuting distance. This imbalance gives attending physicians a great deal of power in negotiating salary, benefits, and working conditions with the hospital. In the future, if the supply of physicians catches up with the demand for physicians, then the benefits of unionization may become more appealing to physicians in some specialties.

For now, unionization is likely to be primarily relegated to residents and fellows. The current increased interest in resident unions will likely be transitory as life in the hospital returns to normal with receding COVID-19 cases.