Historically, Republicans were found to be healthier than Democrats. In a 2009 article from the International Journal of Epidemiology, investigators analyzed data from the 1972 – 2006 General Social Surveys and found that survey respondents who identified as Republican had better self-reported health and were less likely than Democrats to be smokers. Similarly, a 2015 article from the journal Political Research Quarterly found that people who identified as having good health were more likely to vote Republican in the preceding presidential election.

A more recent study in the May 2022 edition of the British Medical Journal found that the association of political party with health may be reversing. This study compared the voting patterns of individual U.S. counties in the 5 presidential elections between 2000 to 2019 with the changes in the mortality rates in each of those counties during the same time period. The results indicated that counties voting Democratic had greater improvements in mortality rates than counties voting Republican. Moreover, the separation between improved mortality rates and political party voting only became apparent after 2008. This suggests that there has been a change over the past 15 years with Democrats now becoming the healthier of the two political parties.

It turns out that determining how political party affiliation affects life expectancy and other health metrics is quite difficult. Nowhere on a death certificate is there an entry for the doctor to  record political party. Because our voting choices are confidential, there is no way to do a public record search for how dead Americans voted in the past Therefore, the only way to study political party affiliation and health outcomes is by correlation studies that look at voting patterns and health metrics of different geographic locations.

In 1997, a new method of determining political affiliation was developed called the Cook Partisan Voting Index. For the past 25 years, the index has been used to determine how strongly a congressional district or a state leans toward the Republican party or the Democratic Party. The index is based on voting patterns in the previous two presidential elections. The most recent data is based on voting in the 2016 and 2020 elections. The higher the number, the more strongly a state leans towards one political party.

The Cook Partisan Index also reports the political leaning by individual congressional district. The most Democratic district is California’s 12th (Oakland area) and the most Republican district is Alabama’s 4th (rural northern Alabama). 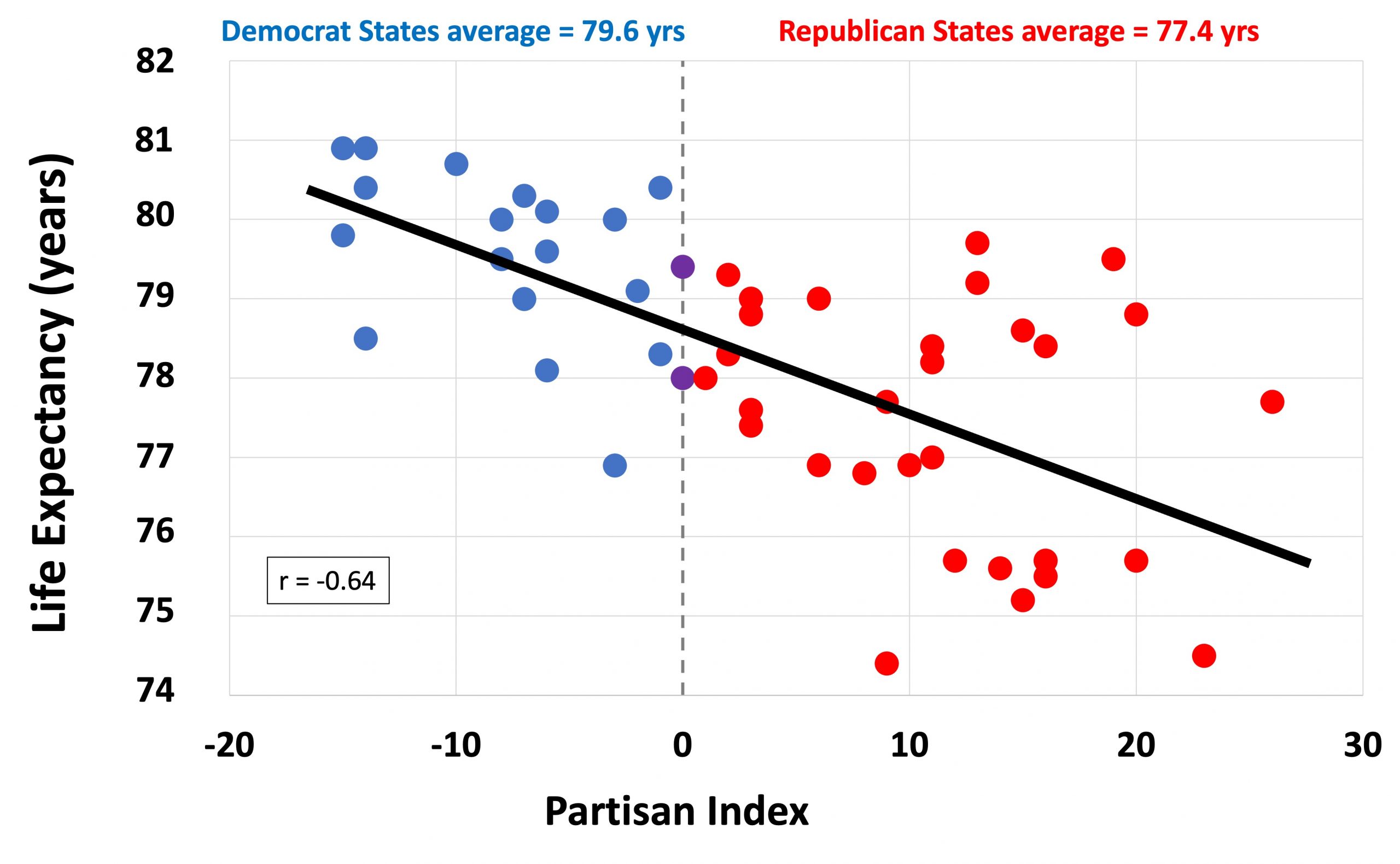 To answer this question, let’s examine the association between the Cook Partisan Voting Index and smoking rates by state. Each year, the Centers for Disease Control reports the percentage of adults in each state who smoke. Overall, the percentage of all Americans who smoke has been steadily falling since the mid-1960’s. 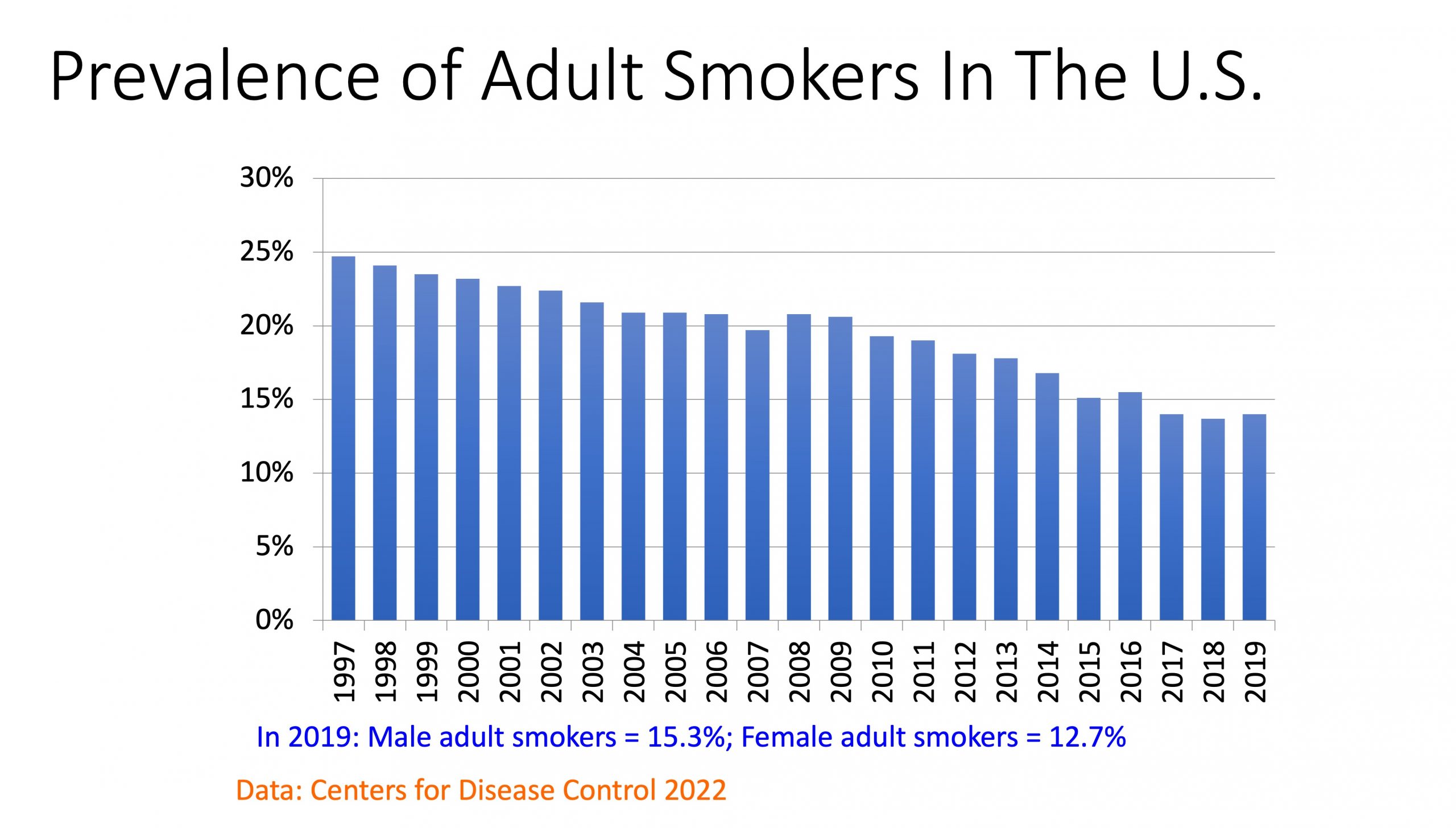 However, there are wide differences in smoking patterns between different states, ranging from a low of 7.9% of adults smoking in Utah to a high of 23.8% of adults smoking in West Virginia. Overall, states that lean Republican have a higher prevalence of smoking than states that lean Democratic (r = 0.64). The average adult smoking rate was 13.7% in Democrat states and 17.8% in Republican states (p < 0.001). 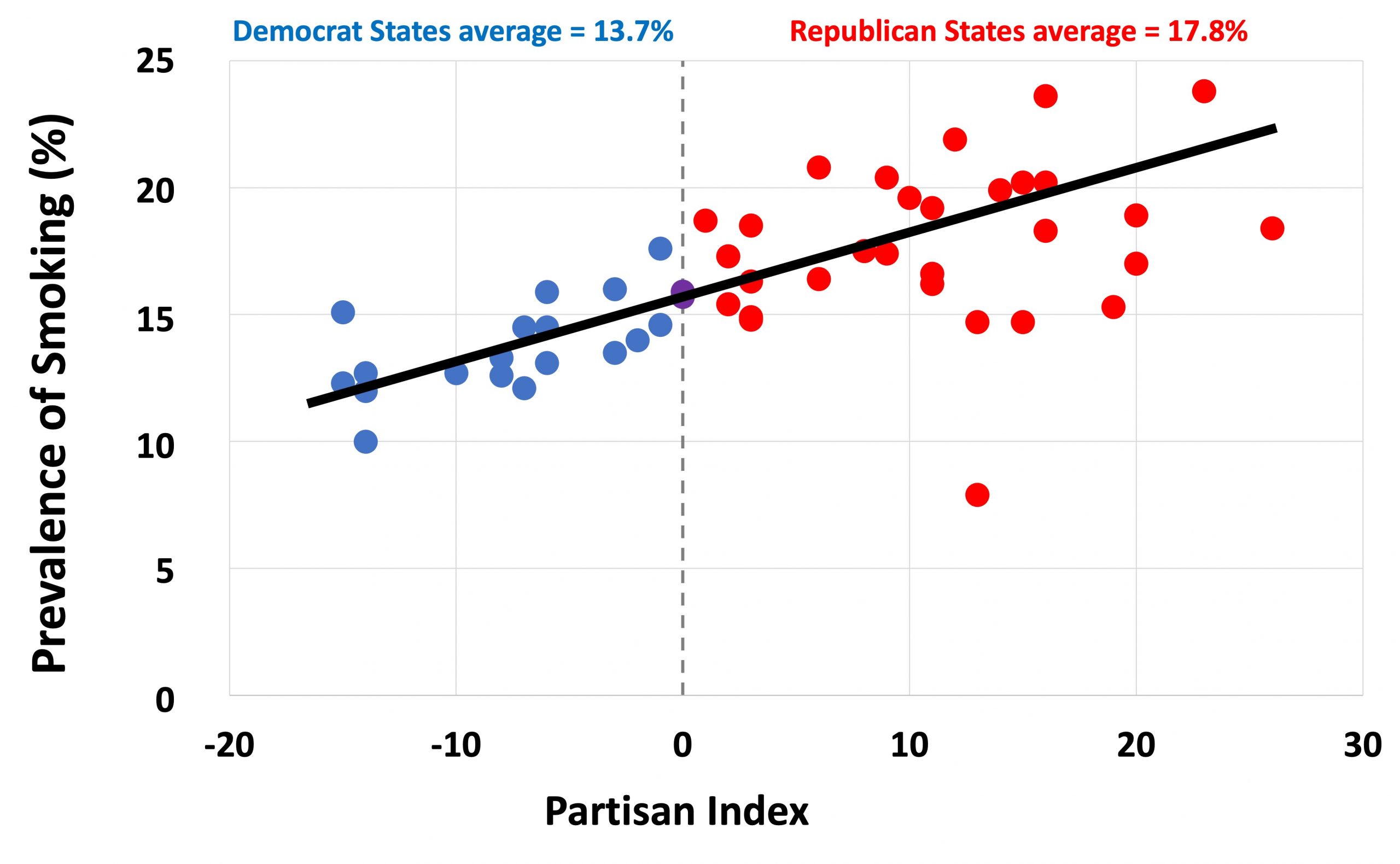 A second health demographic that has changed over the past several decades is obesity. Overall, Americans have been becoming more obese each year. The CDC reports that the rate of obesity (BMI > 30) has increased from 30.5% in 2000 to 42.4% in 2018. Similarly, the rate of severe obesity (BMI > 40) has increased from 4.7% to 9.2%. These statistics are from the National Health and Nutrition Survey (NHANES) which is based face-to-face surveys performed in participating American’s homes by a physician and other health professionals. 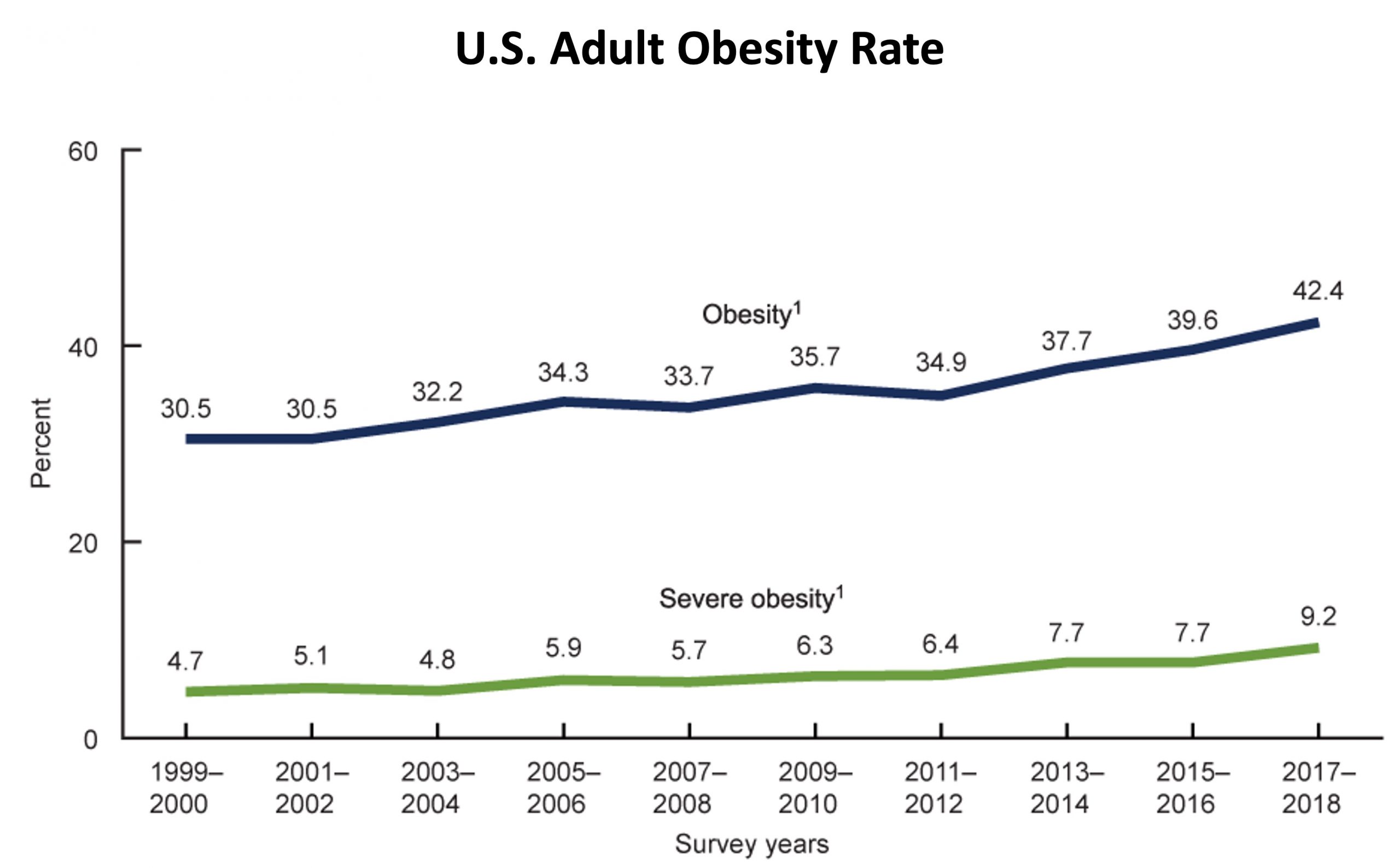 As with smoking, there are substantial differences in the rate of obesity among different states. The Behavioral Risk Factor Surveillance System (BRFSS) reports obesity rates by state based on adult self-reported information from phone surveys. These self-reported obesity data differ from the NHANES data with a lower overall incidence of obesity than NHANES. This difference has been attributed to differences in how the data are obtained (in-person interview versus phone survey). The state with the highest rate of obesity is West Virginia and the state with the lowest rate of obesity is Colorado. Based on the BRFSS data, states that lean Democratic have an adult obesity prevalence of 29.1% and states that lean Republican have an adult obesity prevalence of 34.3% (p < 0.001) 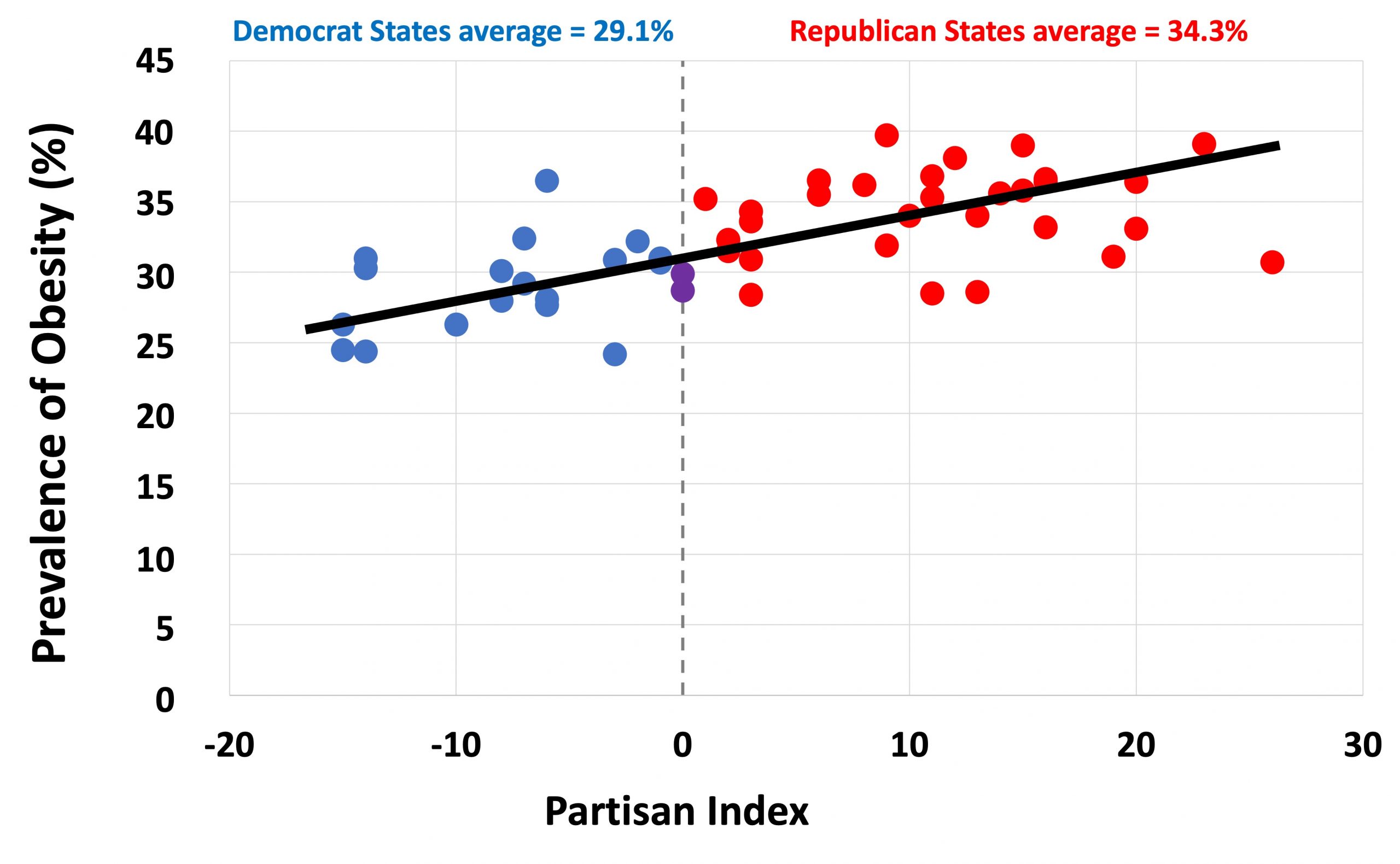 As noted in a previous post, there are significant differences in how Republicans and Democrats fared during the COVID-19 pandemic with residents in Democratic states more likely to be vaccinated against COVID, less likely to become infected with COVID, and less likely to die from COVID than residents in Republican states. By comparing the Cook Partisan Voting Index to the death rate of COVID for each state, we again find that the  there is an association between party affiliation and death from COVID. Overall, 260 people per 100,000 population have died from COVID in Democrat-leaning states whereas 331 per 100,000 died from COVID in Republican-leaning states (p = 0.005). 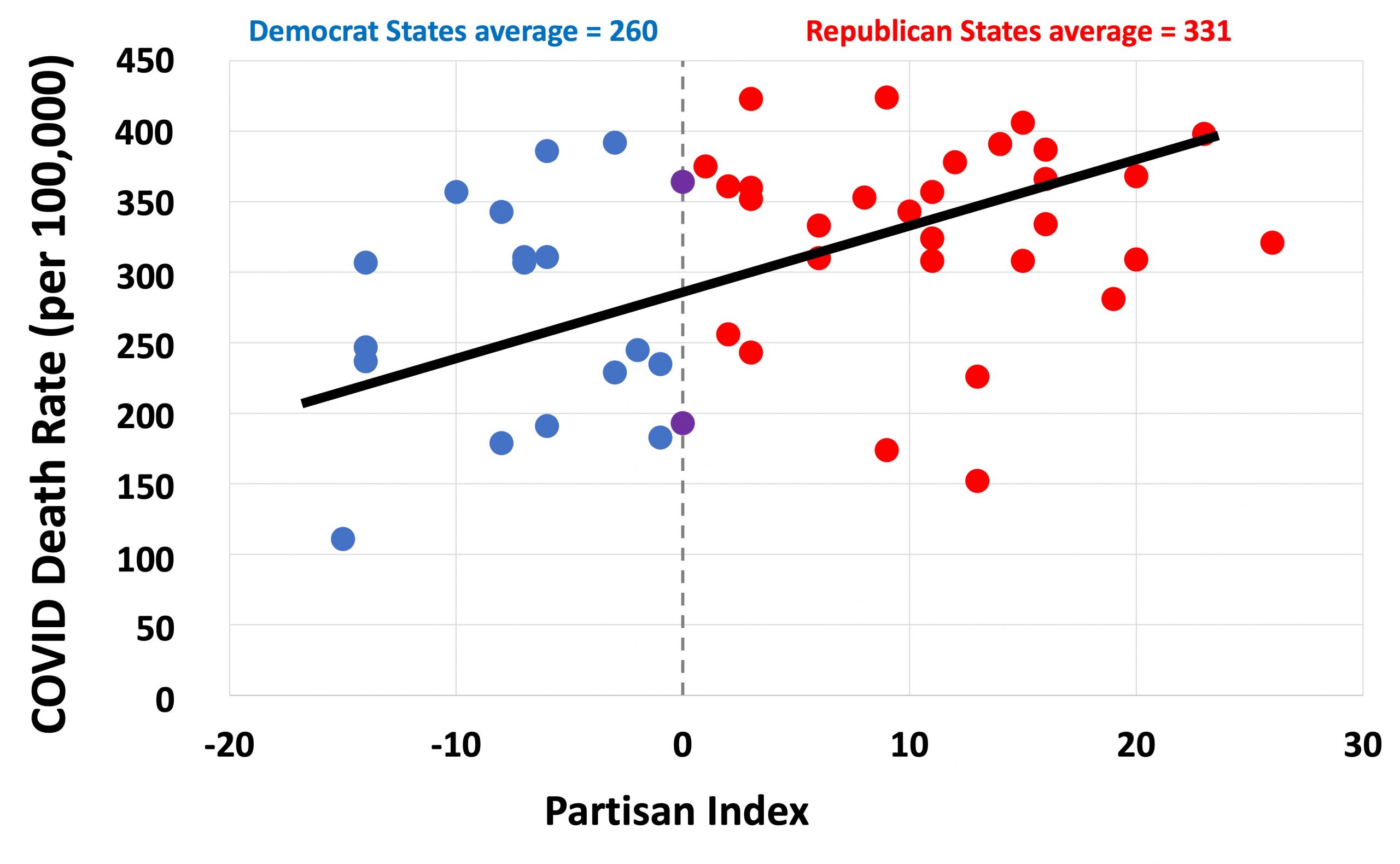 As noted earlier, historically Republicans had a higher self-reported annual income than Democrats. The stereotypical Republican was a capitalism-supporting business owner and the stereotypical Democrat was a blue collar worker who belonged to a union. Personal income has been shown to affect health outcomes with wealthier persons having better health and poorer persons having worse health. Could a change in income demographics between Republicans and Democrats be partially responsible of the shorter life expectancy of residents of Republican states? 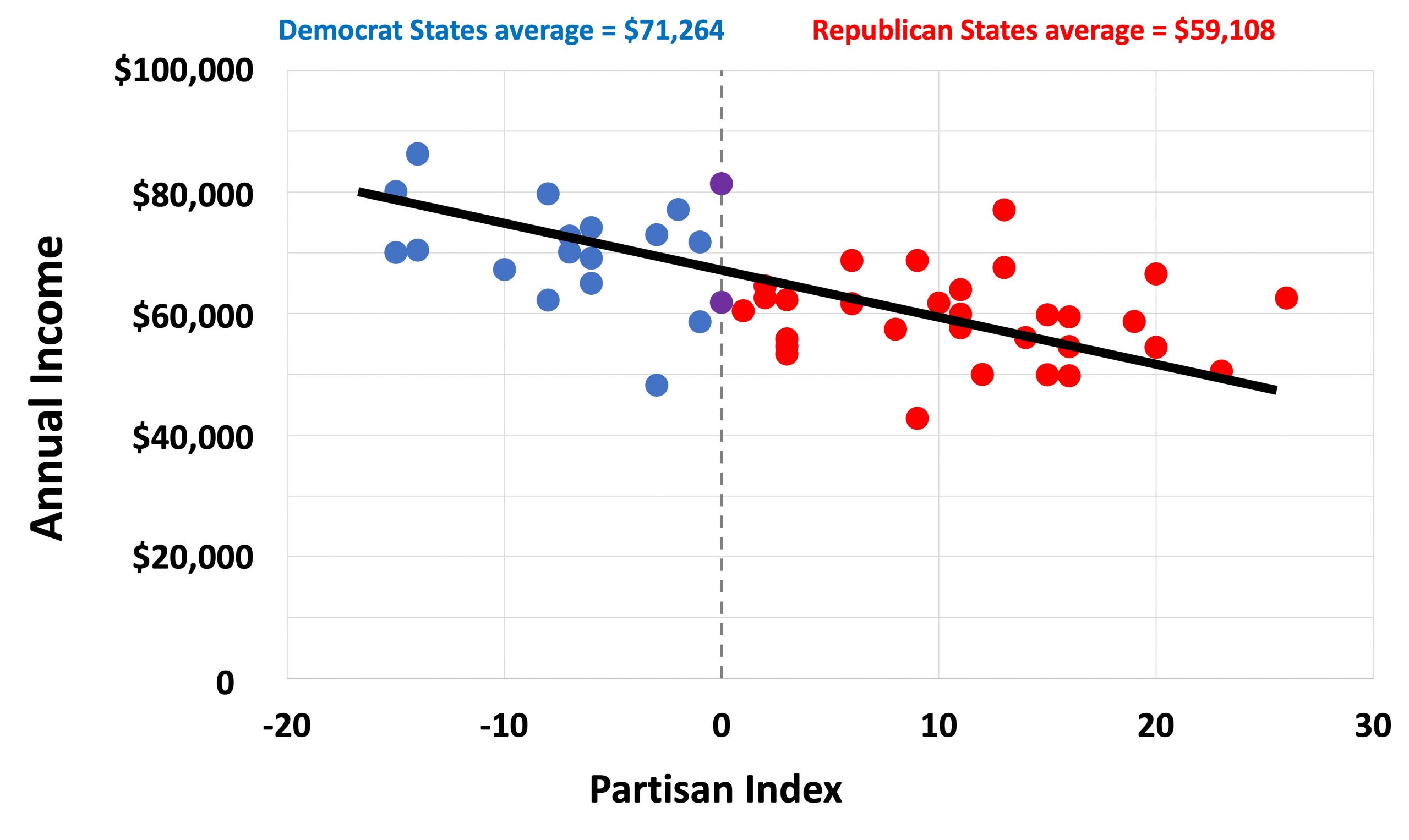 Money is only worth what you can buy with it. The highest income states are also the states with the highest cost of living so the above analysis man not necessarily equate to the purchasing power of each household. Nevertheless, it appears that voters favoring Republicans in the last two presidential elections have a different relative annual income than voters favoring Republicans in previous presidential elections. Residents of states who have recently favored Republicans have a lower income than those favoring Democrats.

For example, given a 2.2 year longer life expectancy, residents of Democrat-leaning states would be expected to utilize 18% more Medicare and Social Security benefits than residents of Republican-leaning states (assuming Medicare and Social Security benefits starting at age 65). The longer a person lives, the more elections that person can vote in. The results imply that people voting Democrat will vote in an average of 2 more annual elections over the course of their lifetimes than those who vote Republican.

We will not fully know all of the healthcare implications for the apparent change in voter demographics for several years. However, it is likely that the evolving differences in health metrics between states that vote Republican and states that vote Democrat will result in very different approaches to healthcare policy.