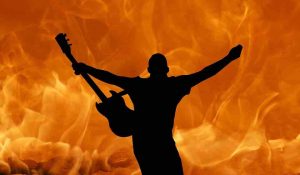 In hospital administrative circles, we have a word them, the Medical Rock Stars. They are the high-profile physicians that bring fame and notoriety. They’re the ones that the newspapers and television news reporters always seem to quote. They’re the ones that when you introduce yourself at a cocktail party, you get the question “So you work at that hospital, the one that Dr. Rock Star works at?”. They’re bigger than life and they bring excitement and vibrancy to your hospital. Hospitals value them and will spend a lot of money to recruit them.

But are they worth it? The answer is… sometimes. In order to decide whether or not to go after a medical rock star for your hospital, you have to have the right expectations.

What audience will they be playing to? Rock ‘n roll stars don’t get famous by playing every night in the local club. They get famous by traveling around the country playing in coliseums and stadiums and they are on the road a lot. The medical rock star is similar; they spend a lot of time being visiting professors at other hospitals and a lot of time making presentations at national and international meetings. They are not going to be at your hospital 5 days a week, 48 weeks a year.

What requests will you have to honor? Rock ‘n roll stars are notorious for making unusual demands to their concert venues. The band Van Halen famously required a bowl of M&M’s with all of the brown ones removed in their dressing room. Celine Dion requires her dressing room be precisely 73.4 degrees F. Paul McCartney once required 19 leafy six-foot plants and 4 leafy four-foot plants in his dressing room. Medical rock stars’ needs are usually not quite so bizarre but be prepared to hear about the need for unusual specialized medical equipment, office furniture, and support staff. The expense of a medical rock star doesn’t stop with salary.

What is your balance between rock stars and non-rock stars? In the music industry, some of the best musicians in the business are the studio musicians. They play day after day, they’re consistently good, but they don’t have the charisma or stage presence to be a rock ‘n roll star. It is the same at hospitals. You will need a core group of reliable clinicians who are great doctors but are never going to be famous. The sad reality of academic medicine is that in a university, you don’t get tenure or get promoted for being the best teacher or the best medical practitioner, you get promoted for writing papers about teaching and giving presentations at national meetings about the practice of medicine. Many of the best clinicians and clinical educators that I have ever known retired after 30 or 40 years of academic practice as assistant professors (the entry level academic rank) without ever being promoted up the academic ranks. But these physicians form the foundation of medical care at our hospitals: they take care of patients day after day and week after week, they are reliable, they practice high quality medicine, and they often make great clinical teachers.

How long will you be able to keep your rock star? The thing about medical rock stars is that every hospital wants them. From the first day on the job at your hospital, they are already being recruited by other hospitals. Part of their job as a medical rock star is to travel the country giving grand rounds and lectures. When they are traveling, they are frequently being offered jobs at the very same places that they are traveling to. On the other hand, the non-famous primary care physician working in your hospital’s outpatient clinic has his or her patient schedule booked solid for the next 6 months and can’t even leave the city on a weekday to go on a job interview. You will rarely keep the medical rock star at your hospital their entire career but you need to make the most of the time that you have them and not be surprised when they submit their resignation after 5 years at your hospital to take a position elsewhere.

So, do you need a medical rock star? The answer is… maybe. Your hospital will be brighter for the light that shines off of them but that light can be fleeting. Cherish the time that you have them but don’t expect them to stay around forever