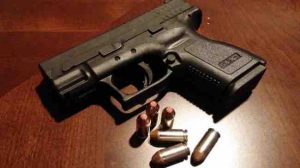 Yesterday, a man was shot a couple of miles from our hospital. Not an unusual event, people get shot every day in America’s large cities. Our hospital is not a designated trauma center but we still have gunshot victims dropped off at our front lobby by their friends – either they die in our ER or we stabilize them and send them to one of the regional trauma centers in Columbus. Guns are a way of life in our city, as they are in all cities in the U.S. We require all patients to go through metal detectors to get into the emergency department – as do all hospitals in town – and finding guns is not uncommon at the metal detector. We require anyone with a weapon to hand it over to our security personnel until they leave – a lot like an old west saloon.

Shootings and murder are commonplace in the United States. We kill each other more than any other first world nation and we are right up there with third world countries where a murder doesn’t even make headlines. We’re pretty good at the detective work that goes into solving those murders, our problem is that we just have too many of them.

To kill a person, two things have to happen. There has to be someone who wants to kill someone else and they have to have an effective way of killing. So, if killing another person requires both intent and an available method, which of these is the reason for the United State’s exceptionally high murder rate compared to peer countries? I’d like to think that it is not because Americans are full of more hatred than other industrialized nations.

A gun is a highly effective way to kill someone and we have too many of them. Guns are everywhere in the United States. We have more guns per capita than any other country on earth. In fact, we have more guns than we have people in our country.

What is the answer? I’m not any smarter than anyone else. But solutions need to start with what we agree on instead of starting with what we disagree on.

We agree with the extremes of gun control. What we disagree with is where the line needs to be drawn in the middle. By spending all of our political energy on fighting each other in courts and legislatures about exactly where that middle line is for gun control, we’ve accomplished almost nothing. If we instead started with the fringes of the gun control debate and tried to figure out on what we can agree on, we might actually get something accomplished.

Don’t get me wrong. I’m not a raging liberal out to pry guns from everyone’s hands. I used to be a member of the NRA (when I perceived it as being an organization primarily dedicated to gun safety and recreational hunting rather than a lobby group for gun ownership). Some of my fondest memories from childhood were bird hunting with my father in early winter in rural Southern Ohio. And I’ve personally annihilated hundreds of clay pigeons over the decades (with permanent tinnitus as evidence).

But having too many guns and putting them in the hands of the wrong people just creates a lot more work for all of us who keep America’s hospitals working. As it is right now, we just make it too easy to kill each other in our country. For most of Americans, the topic of gun control is polarizing. But if you work in an emergency department or a trauma operating room, the lack of gun control is just exhausting.

Sorry to be up on a soap box about this. But we have to make steps to stop our country from being the murder capital of the Western World. I would much prefer my hospital to focus on treating disease than treating the consequences of motive + opportunity.