When the average person thinks of donating blood, the first words that come to mind are “Red Cross”. However, the American Red Cross only supplies about 40% of transfused blood in the United States. What most people don’t realize is that the U.S. uses a free-market approach to maintain its blood supply with the result that there are dozens of different blood suppliers for our nation’s hospitals and they compete with each other. 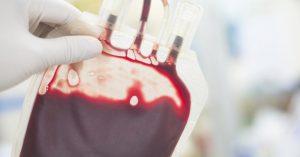 Most countries use a single, government-directed supplier for the blood supply but the U.S. utilizes a network of non-profit blood services that are overseen by federal regulations. As of 2016, there were 786 registered blood establishments that collect blood plus 725 hospital and non-hospital blood banks. Blood centers account for 93% of all collected blood and hospital blood banks account for 7% of collected blood.

We do not transfuse as much blood as we used to. Lower transfusion thresholds (from previous thresholds of 8-9 g/dL hemoglobin to current thresholds of 7 g/dL), a trend toward less-invasive surgeries, the increased use of erythropoietin, hospital blood management programs, and improved medical technology have led to a reduced utilization of blood; the number of units transfused has dropped by 25% since 2008. As the demand for blood has fallen, there has been more competition between the various blood suppliers and many suppliers have gone out of business. So, who are all of these blood suppliers? 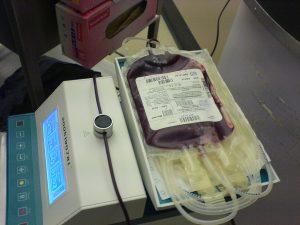 Blood is a unique commodity in that it is almost entirely donated for free by volunteers. The cost of blood is therefore primarily due to the expense of processing, storage, and distribution. Hospitals will typically contract with a particularly blood supplier based on (1) per-unit cost to the hospital and (2) quality of service from the blood supplier. Because of the declining demand for blood and because the U.S. has experienced a period of hospital consolidation into large hospital systems that can compete aggressively for blood pricing, the financial margin for most blood centers are razor thin and many operate at an annual financial loss.

About 38% of the U.S. population is eligible to donate blood but only a fraction of eligible persons actually donate. All blood is subject to testing for communicable diseases including: 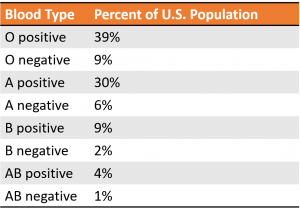 The most common blood type is O+ followed by A+. People with type O- blood are known as universal donors because anyone can received type O- red blood cells. Persons with type AB+ are known as universal recipients because they can receive blood of any type. Like 9% of Americans, I’m B+ so I can receive blood from people with blood types B+, B-, O+, and O- (in other words, 59% of of the population); I can donate blood to people with blood types B+ and AB+ (in other words, 13% of the population). There are differences in blood types between countries and between racial/ethnic groups. For example, 11% of South Koreans are AB+ (universal recipients) whereas only 0.5% of Ecuadorians are AB+. On the other hand, only 0.1% of South Koreans are O- (universal donors) whereas 11% of people in the United Kingdom are O-.

On my 16th birthday, the first thing I did the day I got my driver’s license was to drive to the American Red Cross blood donation center to give blood. Except for a few years during residency and fellowship (when I was regularly exposed to HIV secretions and blood in the ICU), I gave blood every 2-4 months for the next 40 years. About 3 years ago, the Red Cross raised the minimum hemoglobin necessary to donate blood and I found myself too anemic to donate. After anemia tests showed iron deficiency and a work-up for GI bleeding was negative, the conclusion was that I donated too frequently and didn’t eat enough meat. 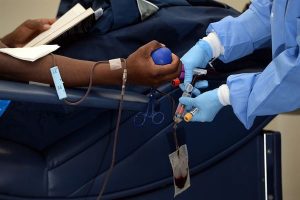 So, I started taking iron supplements for a week before and after blood donations, cut back my donation frequency to every 4 months, and learned to love grilled ribeyes again.

The average donor is male, married, college-educated, with an above-average income, white, and between the ages of 30-50. However, 45% of donors are over age 50. So there is a great need to recruit younger people into the donation pool as the current donor pool ages out. In addition, given the ethnic and racial differences in blood types, there is a need to ensure that our nation’s blood donor demographics more closely represents the nation’s ethnic and racial demographics  so that tomorrow’s blood supply optimally meets tomorrow’s blood demands. We need to eliminate the current disparities that exist in blood donation.

Our nation’s blood supply is a business but a business that is a unique hybrid of volunteers and commercial enterprises that is like no other business in the world. The dynamics of our blood supply is changing based on changes in healthcare financing and some healthcare experts believe that the blood supply system as we currently know it is in peril. But regardless of the changes in economics, patients will still need blood and volunteer donors will still be the ultimate suppliers of that blood. So what am I going to do about it? I do what I’ve always done. I’ll take iron supplements for the next few days and then donate a pint.