Brett Favre was one of the greatest quarterbacks in NFL history. As physicians, we can learn a lot about the legacy we leave and about how we will be remembered from Brett Favre. After a rookie year with the Atlanta Falcons, Favre joined the Green Bay Packers where he spent the next 16 seasons amassing one football record after another. 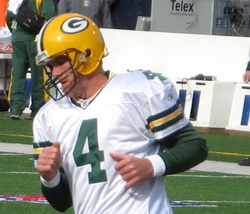 In Wisconsin, he was a hero: parents named their new-born sons Brett, Green Bay jerseys with #4 quickly sold out, and he was awarded the NFL’s most valuable player three years in a row. On March 4, 2008, he announced his retirement but then a few months later, he changed his mind about retirement and asked to be traded so he went to the New York Jets for a year and then announced his retirement (again). A few months later, he signed with the Minnesota Vikings, the arch rivals of the Green Bay Packers. And Brett Favre went from being the most beloved man in Wisconsin to being the most hated man in Wisconsin.

So, what does this have to do with physicians? We do not have the fame of a Brett Favre, but we do build up a reputation in our hospitals, our communities, and our medical schools. If you look around at medical centers and colleges of medicine, buildings are named after those locally famous doctors who stayed at their institution for years or decades and then retired from that institution. They don’t name buildings after doctors that practice at a hospital for 25 year and then leave to go practice somewhere else.

It is because our brains are wired to dislike someone more if we initially thought that they liked us but then later disliked us. As an example, think about the last ugly divorce that a neighbor, co-worker, or family member went through and how the former spouses now see each other. It also works the other way: we like someone more who we initially thought disliked us but then later liked us. As an example, think about every military sergeant and every high school coach that ever existed.

When a senior colleague, a mentor, a department chairman, or a division director leaves for a similar job elsewhere, they become a persona non grata. We perceive that the physician is leaving because he or she no longer likes us. Consequently, we no longer like him or her. Institutional history is always written by those who remain and not by those that leave and so those physicians who leave are remembered by institutional history not for all of the good that they did while they were here, but rather remembered just for leaving.

There are exceptions. For example, for a bona fide promotion, such as a division director who leaves to become a department chairman elsewhere else. Or for family reasons, such as a physician who moves to a different city because his/her spouse’s job got transferred. Or for internal transfers, such as a physician in a large multi-hospital medical system who is asked by the corporate leadership to transfer to fill a clinical void at one of the other hospitals.

But it is the physicians who depart for seemingly lateral moves who we perceive as rejecting us and thus we in turn reject. And the longer a physician has been at one hospital before leaving for another, the more strongly we reject him/her. We tend to erase and forget all of their accomplishments. We find other physicians to elevate to the level of celebrity to replace those who left. The students, residents, fellows, and junior physicians who came to the institution because of them feel as if they were lied to. The physician’s patients feel betrayed. To all, the departing physician becomes a pariah.

I want to be remembered not like Brett Favre but like Cal Ripken. He was born in Maryland and played every one of his 21 seasons with the Baltimore Orioles. His player number was retired by the Orioles in 2001 and the in the state where he was beloved as a player, he is still beloved.