Pulmonary function tests (PFTs) can be very intimidating. A PFT report has many different numbers and for the non-pulmonologist, it is often difficult to know which ones are important and what they mean. As a consequence, many non-pulmonologists just look at the computer-generated interpretation and ignore all of the numbers. The bad news is that the computer-generated PFT interpretations are woefully bad – the computer is pretty good at identifying normal but generally terrible at identifying degrees of abnormal. The good news is that PFT interpretation is actually very easy and in this post, I am going to show you everything you need to know to interpret 99% of the PFTs that you order by looking at just 5 numbers. There are fundamentally four components to a complete PFT: spirometry, lung volumes, diffusing capacity, and the flow-volume loop. We will next look at each of these components.

You can view my OSU MedNet webcast on PFT interpretation that covers more details here.

Spirometry is the most common PFT that you will order. It can either be performed by a respiratory therapist in a pulmonary function lab using an expensive PFT machine (> $50,000) or it can be performed by a nurse in an office setting using a portable spirometer (about $1,000). Spirometry is primarily a measurement of air flow and is used to determine whether or not a patient has obstructive lung disease.

You will see a lot of different numbers on a spirometry report but the only ones that are truly important are the forced vital capacity (FVC), the forced expiratory volume in the first second of exhalation (FEV1), and FEV1/FVC which is the ratio of these two numbers. The other numbers are of minimal importance and you can ignore them. The results of the FVC and FEV1 will be listed both as actual values (in liters of air) and as the percent of predicted. In order to determine the percent of predicted, researchers have measured the FEV1 and FVC of thousands of normal people to determine what a normal value is. “Normal” depends on a person’s age, height, gender, and race so it is important that these demographic elements are correctly entered into the PFT machine so that the computer in the machine picks out the correct normal value based on that patient’s age, height, race, and gender. If the patient’s FEV1 or FVC is lower than the 5th percentile of normals (lower limit of normal), then the PFT machine will flag the result – usually with a different color font or an asterisk by the number.

The ratio between these two numbers, the FEV1/FVC, tells you whether or not the patient is obstructed. If the FEV1/FVC is too low, the patient is obstructed and if the FEV1/FVC is either normal or higher than normal, then the patient is not obstructed.  There are 2 definitions of a “normal” FEV1/FVC that are commonly used. The first (and most common) is the definition used by the American Thoracic Society (ATS) – it is based on a patient’s age because the older we get, the lower a normal person’s FEV1/FVC becomes simply as a result of normal aging. The average FEV1/FVC for a 20-year-old is 87% whereas the average FEV1/FVC for an 84-year-old is 71% and the lower limit of normal for an 84-year-old is 59%. The computer in the PFT machine will flag the FEV1/FVC as being too low based on whatever age is entered in the patient demographics. The second definition of normal FEV1/FVC is used by the Global initiative for chronic Obstructive Lung Disease (GOLD) which uses a flat FEV1/FVC ratio of 70% as being normal for everyone and does not make any adjustments based on a person’s age. Almost all PFT machines will use the ATS method when generating a PFT report but Medicare requires the GOLD method when determining eligibility for enrollment in pulmonary rehabilitation.

If the FEV1/FVC ratio is low for the patient’s age, then the next step is to determine how obstructed they are. This is determined by how low the FEV1 is. IMPORTANT: if the FEV1/FVC ratio is normal, then it does not matter how low the FEV1 is since that patient is not obstructed. The severity of obstruction is usually based on the ATS criteria but once again, the GOLD criteria is different.

If a patient is found to have obstruction based on a low FEV1/FVC, then sometimes a bronchodilator study is performed by giving the patient an albuterol treatment and then repeating the spirometry a few minutes later. Reversible obstruction is defined as an increase in either the FEV1 or FVC by 12% after albuterol. In addition, the amount of the increase in FEV1 or FVC must be at least 200 ml to qualify as reversible obstruction. If the initial FEV1/FVC is normal, there is no point in doing a bronchodilator study.

For the spirometry test result to be accurate, three things must occur: (1) the patient’s age, race, height, and gender must be entered correctly, (2) the patient must be coached correctly by the nurse or respiratory therapist administering the test and the patient must give a good effort, and (3) the physician or advance practice provider must correctly interpret the test.

Lung volumes cannot be measured using an office spirometer and require testing in a pulmonary function laboratory. This is typically done by having a person sit in a plethysmographic box and performing a series of inhalation and exhalation maneuvers. Once again, the PFT machine will generate a whole bunch of numbers but the only one that is really important is the total lung capacity (TLC). If this number is too low, then the patient is restricted and if it is too high, then the patient is hyperinflated. Just as in spirometry, the TLC percent predicted is based on the patient’s age, height, race, and gender.

Of note, some office spirometry machines will give a computer-generated interpretation of restriction based on the FVC alone. You really cannot diagnose restriction using the FVC alone from spirometry, the diagnosis requires measuring the TLC with lung volumes – the FVC can sometimes be low when the TLC is totally normal. The finding of a low FVC on office spirometry should merely be an indication to send that patient to the pulmonary function lab for a complete set of PFTs that includes lung volume measurements. 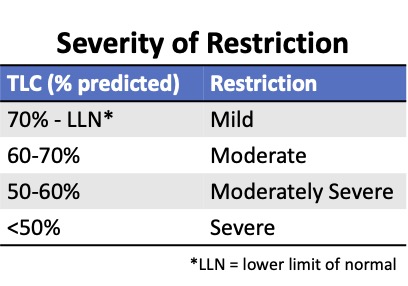 If the TLC is larger than the upper limit of normal (generally around 120% of predicted), then the patient is hyperinflated. The only other number that is worth knowing about is the residual volume (RV). If the RV is too high (above the upper limit of normal), then the patient has air-trapping. Patients who are obstructed will often also have hyperinflation or air-trapping. In fact, isolated air-trapping alone can indicate early obstruction, even when the FEV1/FVC ratio is normal. 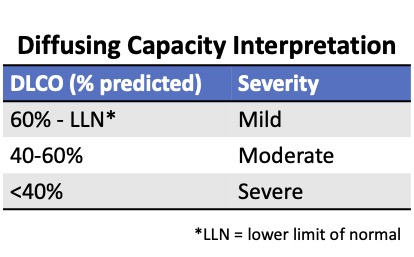 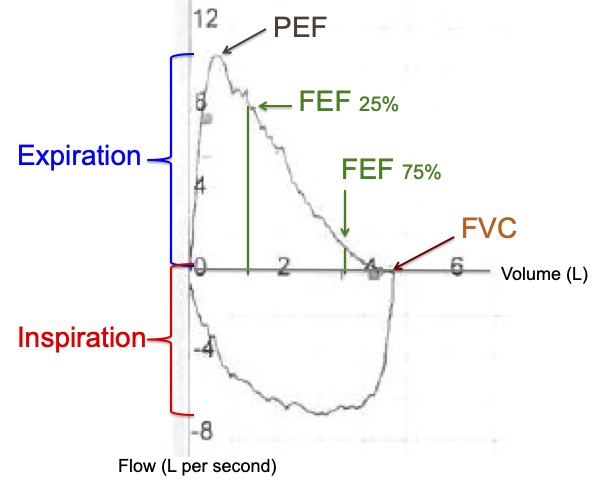 The shape of the normal loop should have an early expiratory peak with a gradual drop downward until the patient reaches the maximum amount of air that they can exhale (FVC). The inspiratory portion of the loop on the bottom should be more symmetric and look sort of like a half-circle. If the patient does not give a good effort, then the test is invalid and you should not believe the FVC or FEV1 numbers. In this situation, the shape of the loop will be very irregular as shown below:

Coughing during the test will also invalidate spirometry results and can be identified by a sudden drop in expiration causing a crevice or “double hump” to appear in the top portion of the loop:

Putting it all together

If y0u have a full set of pulmonary function tests, these are the steps to interpreting the results that will be all you need to do in 99% of the PFTs you order:

Every type of lung disease will give a particular pattern of PFT results. The following table summarizes the most common lung conditions and their PFT patterns. The cells in the table that are shaded yellow are the key findings that point toward each of these 4 conditions: 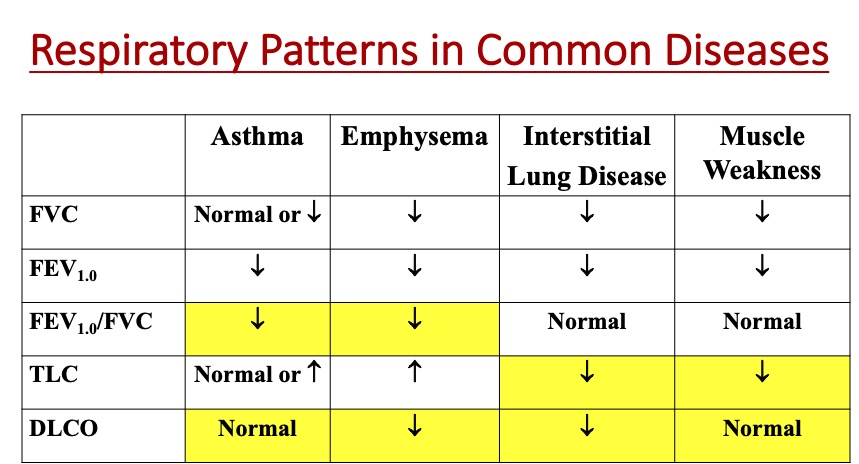 When it comes to PFT interpretation, less is more. You really only need to know 5 numbers to interpret the overwhelming majority of PFTs. You can ignore the rest of the data and leave that for us pulmonologists who like to get way down in the weeds of the PFT report.