No test in pulmonary medicine is fraught with more confusion and mystery than the cardiopulmonary exercise test, or CPET. This is a test that reports a large number of physiologic measurements during exercise when the patient is asked to exercise to his or her maximum effort. On the one hand, there is a wealth of information in all of those numbers but on the other hand, most physicians don’t know what to do with all of those numbers. As a consequence, the CPET is one of the most under-utilized tests in the hospital. There are several very detailed guides to CPET interpretation, such as the ATS/ACCP Statement on CardiopulmonaryExercise Testing, but these have so much detail that they can be difficult to approach by the average physician. In this post, I will go over a very basic approach to CPET interpretation, albeit one that is fairly oversimplified. I will then cover a second, slightly more advanced approach to CPET interpretation.

Physicians of different specialties use the CPET for different purposes and look at different physiologic measures. I am going to focus on the use of the CPET from the pulmonologist’s vantage point. Although there are many reasons for ordering a CPET, the most common reasons are (1) to determine the cause of a patient’s dyspnea, (2) to determine if a patient can tolerate surgery or lung resection, and (3) to determine whether a patient is disabled.

The test is done by having the patient ride a stationary bicycle (although a treadmill can also be used). The resistance on the bicycle is gradually increased making it harder and harder to pedal and the patient exercises until they can’t go any longer. The patient breathes through a mouthpiece and has a number of monitoring devices that measure:

From these different measurements, a computer is able to calculate a large number of physiologic variables and can generate a large number of physiologic graphs. This is where the CPET report can get overwhelming for many physicians in that there are so many numbers and graphs that it can seem like you are drowning in data. But there is good news… you can ignore most of the data and still get the information that you need from the CPET most of the time. Here are two ways to approach the CPET, a basic interpretation approach and an advanced interpretation approach.

This will answer the questions “Is the exercise impaired?” and “If so, is impairment due to heart disease or lung disease?”.

Using the basic approach will usually allow you to stratify patients into 4 categories of exercise limitation: (1) normal, (2) cardiac, (3) pulmonary, or (4) non-cardiac, non-pulmonary.

This table is not perfect. For example, many patients with heart disease may reach a maximum predicted heart rate but have a normal diastolic blood pressure and no ischemic changes on the EKG. Similarly, some patients with lung disease may have a maximum minute ventilation > 85% of predicted but do not desaturate. In other words, patients with abnormal cardiovascular or pulmonary limitation do not need to have all of abnormalities listed above, just one of them. Also, the category of “non-cardiac, non-pulmonary” is very broad and can include patients who gave a poor effort on the test, patients with neuromuscular disease, patients with peripheral vascular disease, those who are deconditioned, and those who are obese.

If you are ordering the CPET to determine if a patient is able to undergo lung resection surgery, you can just focus on the maximum oxygen uptake (mVO2). Those patients with a relatively preserved mVO2 can generally undergo lung resection safely. This can be a particular help in those patients with lung cancer and a low FEV1 who might appear to be high risk based on spirometry. However, the cardinal rule of lung cancer treatment is to never miss an opportunity to send a surgically curable patient to a surgeon, so the CPET can sometimes give you the confidence you need to proceed with surgical resection.

If you are ordering the CPET to determine disability, then there are gradations of disability that are used in the AMA’s Guides To The Evaluation Of Impairment that are often accepted by disability granting agencies. Disability can be stratified by disability class or by the percentage of the whole person that is impaired based on the mVO2.

By first determining if the patient actually exercised to the point of anaerobic metabolism and then determining the anaerobic threshold, you can do a deeper analysis of the CPET for the advanced approach:

Using this analysis, the results can point toward several conditions: 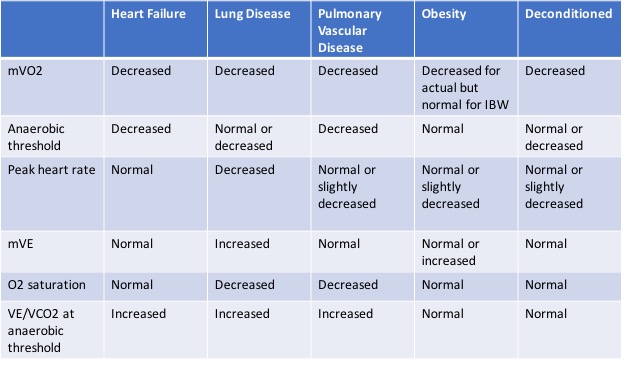 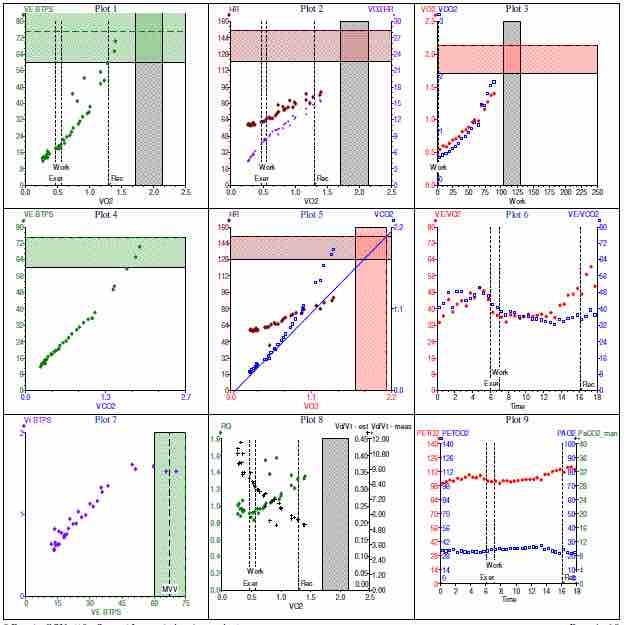 Here is an example of a patient with combined diastolic heart failure, secondary pulmonary hypertension, coronary artery disease, plus interstitial lung disease. The clinical question was which of his diseases was responsible for his shortness of breath? The anaerobic threshold was determined to occur at 10.09 minutes (best seen on Plot 6 of the graphs). First, look at the mVO2 – in his case, it was reduced at 12.4 ml/kg/min (67% of predicted), so exercise was abnormally impaired. Second, determine if he had an adequate ventilatory reserve – he did not since his mVE was 73.8 L (98% of predicted) – this indicates lung disease as a cause of his exercise limitation. 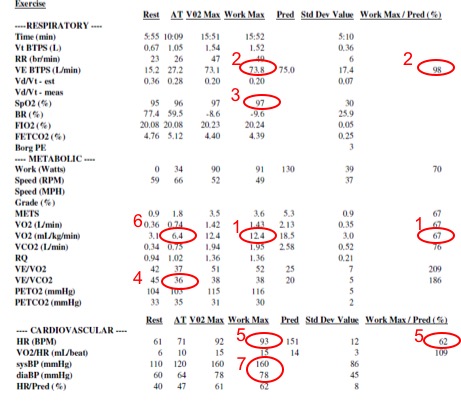 Third, determine if he desaturated – he did not since his saturation at peak exercise was 97%. Fourth, determine if he had an excessive dead space – he did since his VE/VCO2 at anaerobic threshold was 36 (anything over 34 being abnormal) – this is further evidence of lung disease. Fifth, determine if he reached his maximum predicted heart rate – he did not since his heart rate at peak exercise was 93 (62% of normal) indicating that it was not his cardiovascular system that limited his exercise. Sixth, determine if the anaerobic threshold is reduced – his anaerobic threshold occurred at a VO2 of 6.4 ml/kg/min which is a VO2 of 34% of his predicted mVO2 (6.4 ÷ 18.5) and therefore reduced since it is less than the normal threshold of 40% of the predicted mVO2. Seventh, determine whether the blood pressure response is normal – his systolic blood pressure rises normally to 160 but his diastolic blood pressure also rises from 60 to 78, which is abnormal – this probably is related to his diastolic heart failure but since the diastolic blood pressure remained < 90 mm Hg, it was probably not the primary limit to exercise. From the exercise test, we can determine that it is his lungs (in his case, the interstitial lung disease), not his heart that is the cause of his impairment.

As with many tests in medicine, the results are best interpreted in the context of the individual patient. Therefore, the physician who is familiar with the patient’s history and has done a physical examination is in the best position to accurately interpret the CPET. But for those patients who have shortness of breath and you are unsure if it is due to undiagnosed heart disease, undiagnosed lung disease, obesity, or deconditioning, the CPET can often be tremendously helpful. Also, in those patients who have both known heart disease AND known lung disease, the CPET can help determine which of the two diseases are the cause of shortness of breath and exercise limitation.