Over the past year, I heard repeatedly from patients, politicians, and the press about how COVID-19 was an urban disease and not a rural disease. There was a perception that small towns and farm country were not as affected as cities. Many of my patients who lived in small communities did not want to travel to Columbus for office visits because of fear of getting infected during a visit to the city. There were complaints from rural residents that they were being unnecessarily subject to social distancing penalties for what was a “big city problem” that were not relevant to them. After all, COVID-19 spreads by close contact with other people and it seemed logical that in densely populated urban areas, COVID-19 would be more prevalent. However, in analyzing data from the Ohio Department of Health, it appears that just the opposite is true.

At the core of this misperception is how epidemiological data are reported. Early on in the pandemic, we heard about total numbers of infection (“1,000 people in Columbus have been infected”). And by total numbers, it is true that cities in the United States had more cases than rural areas. But total numbers do not tell you anything about the chance you have of getting infected. Instead, the rate of infection is more important than the total number of cases.

So, what is important is not the total number of infections in the city versus in the country but what the chances of getting infected are if a person lives in a city versus living in the country. The Ohio Department of Health regularly releases data on the incidence of COVID-19 infection for each zip code in Ohio. And it turns out that the zip codes where a person is most likely to become infected are in rural areas, not urban areas. In the figure below, the darkest areas are those zip codes with the highest incidence of COVID-19 since the pandemic began and the lighter areas have the lowest incidence of infection. 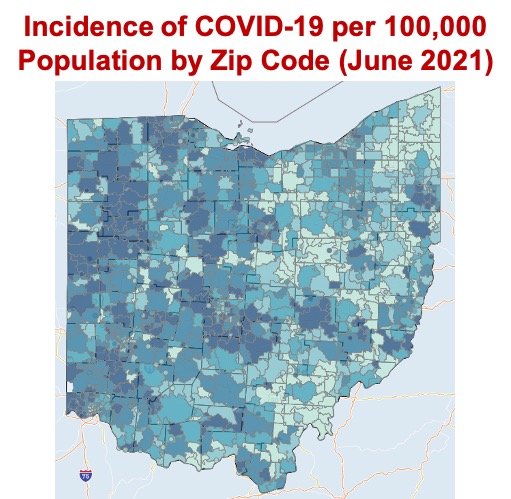 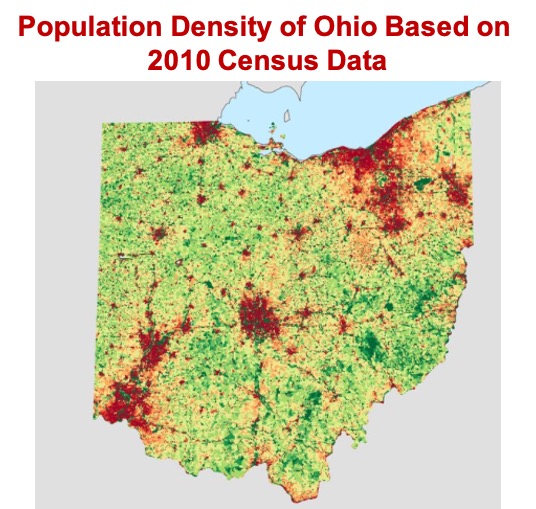 By superimposing these two figures, we can see where the 8 major urban areas are on the map (Cleveland, Cincinnati, Columbus, Dayton, Toledo, Akron, Canton, and Youngstown). As it turns out, the darkest zip codes are in the least populated areas of the state. In other words, you are statistically more likely to get infected with COVID-19 at a restaurant, church, or grocery store in rural Ohio than in urban Ohio. 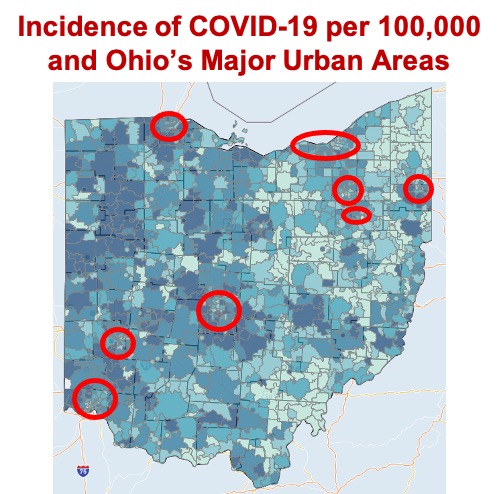 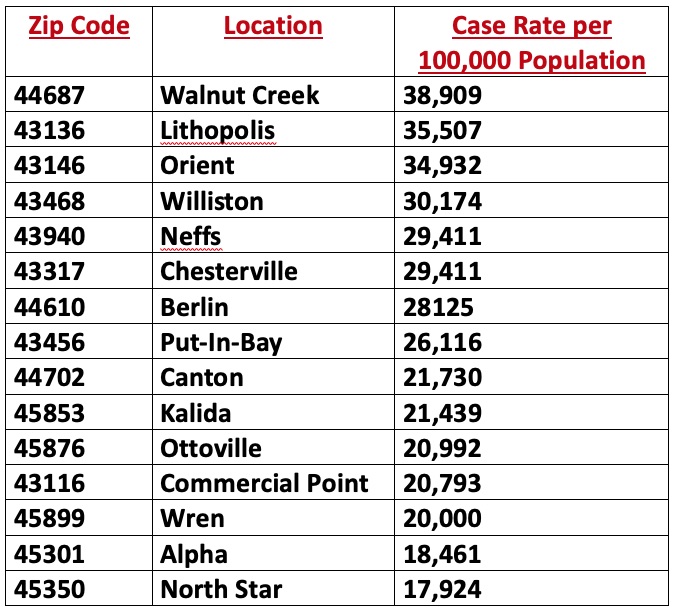 It turns out that of the 15 highest incidence zip codes in Ohio, all but one are in rural communities and only 44702 (Canton) is in a medium or large city. Most of these locations are small villages of a few dozen to a few hundred people. Therefore, the concept that rural areas are “safer” from COVID-19 is not true.

The rural versus urban differences in COVID-19 infection rates are likely to be amplified in the coming months as urban communities outpace rural communities with respect to vaccinations. For example, in Cuyahoga County (location of Cleveland), 52.6% of the total population has received at least one dose of the COVID-19 vaccine. On the other hand, in Holmes County (location of Walnut Creek, the highest incidence zip code in the state), only 15.2% of the population has received a COVID-19 vaccine. In the figure below, the darker counties have the highest percentage of the population receiving at least one dose of vaccine whereas the lighter colored counties have the lowest percentage of the population vaccinated. Ohio’s largest cities are in the darker counties indicating that our urban communities are more fully vaccinated than our rural communities. 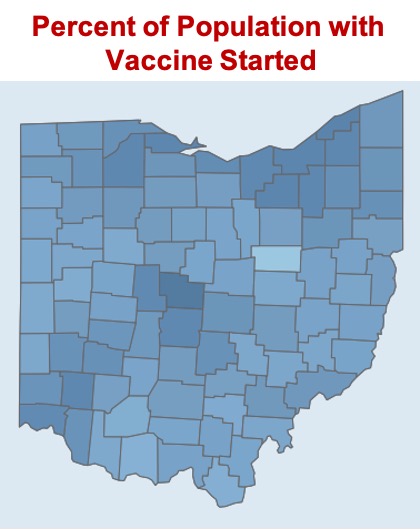 Epidemiologists will be analyzing the COVID-19 pandemic for years to come and much of what we believe to be true today will turn out to be wrong.  But at the present, no place appears to be safe from COVID. Measures to prevent infection, such as vaccination, are just as important, if not more important, in rural communities than in urban communities.