Physicians at academic medical centers often have an option to contribute to a state teacher’s pension plan. Although a pension can be an important component of a diversified retirement portfolio, some public pensions are currently in danger. How safe is your state’s public pension and should you contribute to it? The answer is in the pension’s vital signs.

In Ohio, the State Teachers Retirement System (STRS) is our state’s public pension for academic physicians at state-funded universities (such as the Ohio State University). STRS is similar to Social Security or an annuity in that it gives university-employed physicians an option to participate in a defined benefit plan that will pay you a fixed amount of money every month that you are alive after you retire. There is also an option for survivor benefits so that your spouse can continue to receive a monthly payment after you die. The advantage of defined benefit plans, such as STRS, is that you never run out of money in retirement. The disadvantage is that as an investment, you may be able to come out ahead by investing the money yourself rather than contributing to the pension during your working years.

In the past, most American workers had access to employer-sponsored pensions but many private employers have abandoned pensions and replaced them with 401(k) plans. However, pensions are still quite common for employees of state and local governments. Everyone’s retirement portfolio should be diversified and contain several different types of investments, such as stocks, bonds, and real estate. A pension can be an important component of those investments, less risky than bonds but also having a low rate of return. 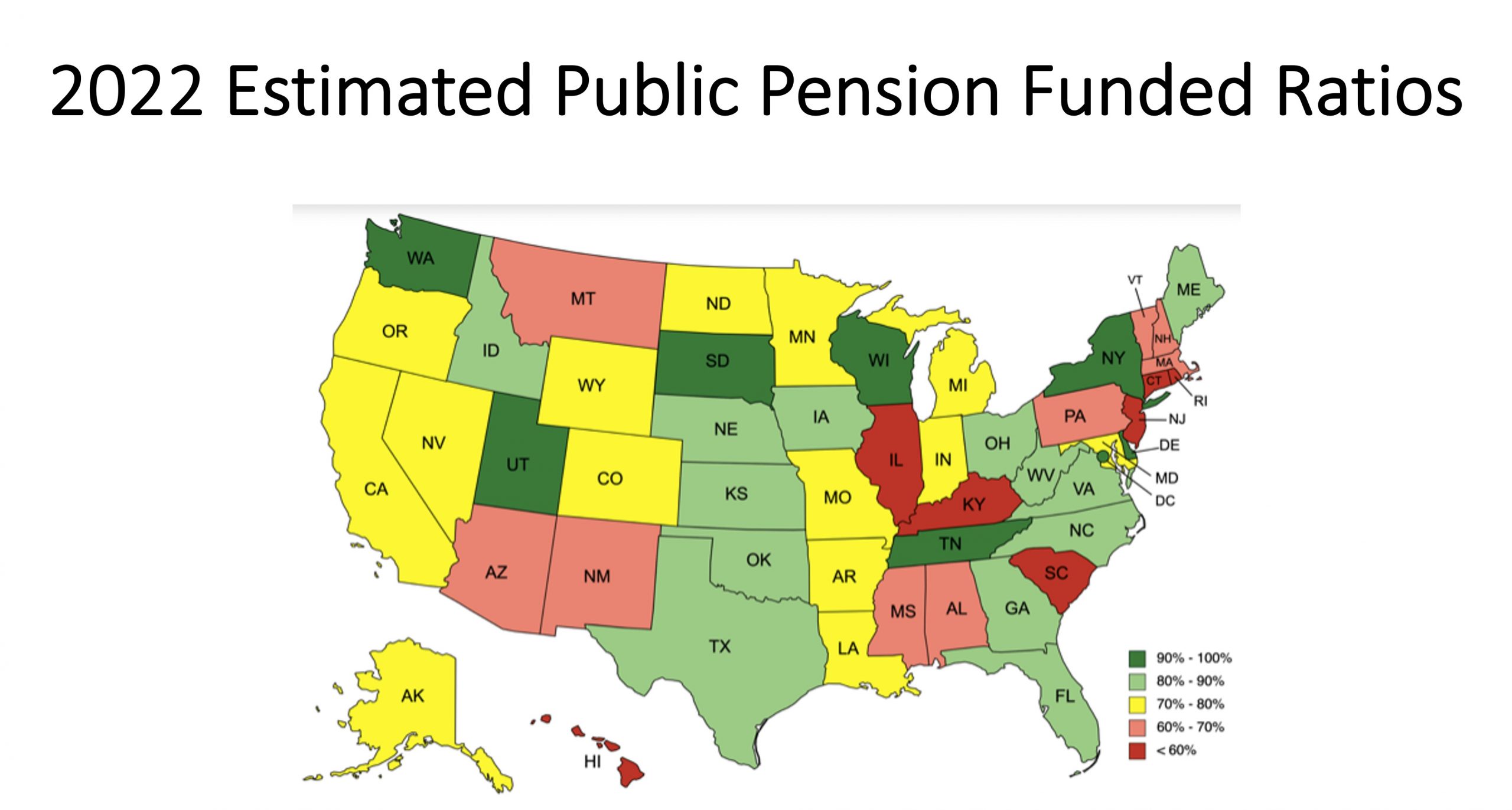 One of the main reasons that many states’ funded ratios have recently fallen is the downturn in the stock market in the past 7 months. Public pensions do not just keep all of their money in a checking account, they invest the money in order to keep up with inflation and to ensure that they have sufficient money to pay their retirees in the future. Most public pensions estimate that their investments will have an average 6.9% annual return. Last year, in 2021, the average pension plan’s rate of return was 25.3% – an extraordinarily high rate of return, primarily because stock markets had an exceptional year. So far in 2022, the average pension plan has had a -10.4% rate of return. In other words, instead of gaining 6.9% this year, the average pension has already lost 10.4%.

There are several reasons why a state might have a low funded ratio:

When a public pension’s funded ratio falls, or when actuarial analysis projects that it will fall in the future, there are a number of tactics that the pension can take to rectify the low funded ratio. For example, the pension managers can suspend cost of living increases in pension distributions. Or they can increase the contributions by increasing the percentage of employed pension members’ salaries going into the pension fund. Or they can increase the number of years a member must work before being eligible for full retirement benefits. When a public pension makes these corrective actions, it can take many years for the funded ratio to increase to 100%. The projected number of years that it will take to reach 100% is called the funding period.

Simply having a low funded ratio may not necessarily be bad as long as the public pension managers have taken corrective actions to improve the funded ratio. How effective these corrective actions are projected to be is measured by the length of the funding period. In general, the shorter the funding period, the better. In Ohio, the State Teachers Retirement System is required by state statute to have a funding period of less than 30 years. Funding periods in excess of 30 years are generally too long and can be a sign of an unhealthy public pension.

Public pensions with both a low funded ratio and a long funding period are in trouble. These pensions are in danger of being unable to meet future obligations. From a retirement portfolio standpoint, they are poor investments.

A Story Of 3 States

Wisconsin. The primary state public pension is the Wisconsin Retirement Benefit. It has a track record of being well-managed and as a consequence, it has a funded ratio that exceeds 100%. In fact, the funded ratio at the end of 2021 was 120.6%. That puts its funded ratio as the eighth highest out of 167 statewide public pensions in the country. Academic physicians can feel secure that their contributions to the Wisconsin public pension will be safe and that they can count on their monthly pension benefits in retirement.

Ohio. There are 5 statewide public pensions in Ohio. Academic physicians have the option of participating in one of them, the State Teachers Retirement System of Ohio.  In 2001, STRS was in good shape with a funded ratio of 91%. The great recession severely impacted STRS and by 2012, the funded ratio had fallen to 56%. By 2017, the funding period to reach a funded ratio of 100% had risen to 60 years, putting the entire pension in jeopardy. STRS enacted three corrective measures to stabilize the pension fund: (1) suspension of annual cost of living increases in retiree pension distributions, (2) a 2.91% increase in the employer contributions to the pension fund, and (3) an increase in the number of years of service to full retirement benefits from 30 years to 35 years. By the end of 2021, the pension’s funded ratio was 80.1% and the funding period was 8 years. STRS’s willingness and ability to make hard decisions to increase contributions and limit distributions has resulted in it once again becoming a safer retirement investment for participants.

Even healthy public pensions are vulnerable to forces that can destabilize them. For example, the next pension fund manager could make poor investment choices. The state legislature could enact statues that acquiesce to lobby pressure to increase retiree benefits or decrease employee/employer contributions. The next actuaries may make faulty life expectancy projections. For these reasons, it behooves all participants to periodically check the status of their public pension. At a minimum this should entail reviewing the current funded ratio and funding period of the pension. In this sense, a pension is an investment and should be monitored similarly to how one monitors their 401(k) or 403(b) fund.

A strong and secure retirement investment portfolio is one that is diversified. Ideally, one’s portfolio should consist of a mixture of stocks, real estate, bonds, fixed income, and cash. For each of these types of investments, the potential long-term return is directly related to the short-term risk of the investment.

Some financial pundits have argued that it is better to not participate in a public pension and instead take the money that would have gone into the pension fund from payroll deduction and invest that money into stocks. The argument is that in the long-term, the rate of return from stock investments will be greater than the return from pension distributions in retirement. However, a more accurate view of a public pension is that it forms a crucial low-risk/low-return component of a balanced retirement portfolio. By having a public pension in the portfolio, the academic physician can devote a larger percentage of other retirement investments (403b, 457, IRA, etc.) into higher risk stocks and real estate.

In addition to functioning as a fixed income retirement investment, public pensions have other features that can increase their value to the participant. Survivor benefits for one’s spouse and dependents can replace the need to purchase separate life insurance. Disability benefits can replace the need to purchase separate disability insurance. Access to group rates for health, dental, and vision insurance can result in insurance premiums that can be thousands of dollars less per year than equivalent insurance policies purchased individually. And access to financial counselors at the public pension can provide some elements of free financial planning advice.