Today is December 7, 2021 and the 80th year since the attack on Pearl Harbor that brought the United States into World War II. Today, we are in a different war – a war against the coronavirus. In every war there are those who sympathize with the enemy. In today’s war, the sympathizers are the unvaccinated.

On April 19, 2021, COVID-19 vaccines became available for all American adults under FDA emergency authorization and on August 23, 2021, vaccines were fully approved by the FDA for all American adults. Since that time, public health authorities have been careful to avoid placing any blame for the pandemic on the unvaccinated in order to avoid further political polarization. I am not a public health authority so I’m going to say it like it is – the unvaccinated are a primary reason that we are still in a pandemic. It is what doctors and nurses all over the country think but have not wanted to come out and say. The SARS-CoV-2 virus essentially declared war against the human race. Anti-vaxxers and anti-maskers do not stand for freedom – they are sympathizers with the virus in this COVID-19 war.

In the week after the attack on Pearl Harbor, a Gallop poll found that 9% of Americans did not want to fight back against Japan – presumably, these people just wanted the U.S. to roll over and become a Japanese territory. In the American Revolution, 15-20% of Americans were Loyalists (“Tories”) who sympathized with the British and were opposed to American independence – after the war, an estimated 200,000 of them left the new United States for Canada, the Caribbean, and England. Presently, 16.5% of American adults have not received at least one dose of a COVID-19 vaccine, roughly the same percentage of American adults who were Loyalists during the Revolution. Wittingly or unwittingly, they have sided with the virus and against the human race.

Who are the unvaccinated?

The unvaccinated are not the old and wise; instead, they are mostly younger. According to the CDC, >95% of American adults over age 65 have received at least one dose of a COVID-19 vaccine as of December 6, 2021. Based on the CDC graph below, 99.9% of Americans between 65-74 years old have received a COVID vaccine; in other words, only 1 out of 1,000 Americans in that age range has not been vaccinated! American seniors got vaccinated not because they were required to by employment mandates – most of them are already retired. They got vaccinated because they have lived long enough to know that in any war, when the enemy attacks you, your family, and your country, the only way you survive is by defending yourself. In this war, the only defenses that work are vaccination, wearing masks, and social distancing.

So, who are the unvaccinated? They are mostly young. According to data from the CDC, only 68.9% of American adults between 18 and 24 years old have received a vaccine. The likelihood of being vaccinated goes up in direct proportion to one’s age.

Vaccination rates by race and ethnicity are much more difficult to determine. According to CDC vaccine administration data, Native Americans are the most vaccinated group followed by Asian Americans, Hispanic Americans, White Americans, and Black Americans. However, the CDC does not have race or ethnicity data for fully 1/3 of people who have been vaccinated. Therefore, statistics from the CDC vaccine administration race and ethnicity data are incomplete. 43 states report race/ethnicity statistics from state health department data. According to these state statistics, Asian Americans are the most vaccinated, followed by White, Hispanic, and then Black Americans. A third way of examining race and ethnicity vaccination differences is by telephone surveys. The National Immunization Survey is a telephone survey involving a sample of the adult population in all states. According to the most recent survey, Asian Americans are the most vaccinated followed by Hispanic, then Black, then White. An inherent problem with telephone surveys is that their accuracy depends on (1) who has a telephone, (2) who is willing to take a survey when the phone rings, and (3) how accurately and honestly a person answers the survey questions. Given the rather dramatic differences in the results of the three methods of assessing the data, the only conclusion that seems certain is that Asian Americans are the most heavily vaccinated group and beyond that, we really do not know how race and ethnicity affect vaccination rates.

There is better data on vaccination rates by community size. The larger the city or town a person lives in, the more likely that person is to be vaccinated. People living in rural communities have the lowest rates based on CDC data. The graph below shows urban versus rural fully vaccinated rates for all ages (not just adults). 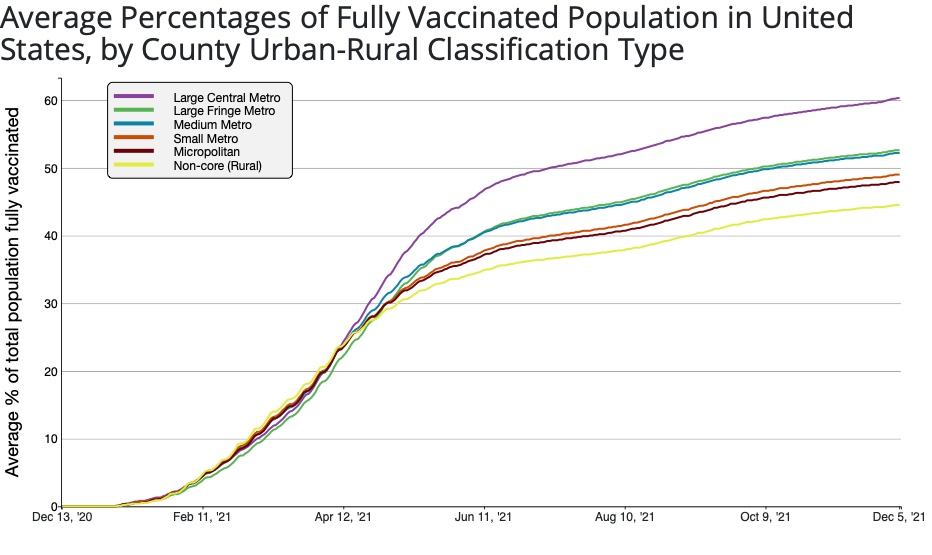 Not surprisingly, states with large urban populations are doing better than states with larger rural populations. Coastal states have a greater percentage of their populations vaccinated than southern and midwestern states. My state of Ohio is among the worst performers from a vaccination standpoint. Much has been written about vaccination disparities among racial/ethnic groups but those differences pale when compared to the rural versus urban disparities. When vaccines first became available, the thought was that the low vaccination rates in rural areas were due to less access to the vaccines in those areas; now that vaccines are widely available, it is clear that remaining unvaccinated is a conscious choice that rural people are making. 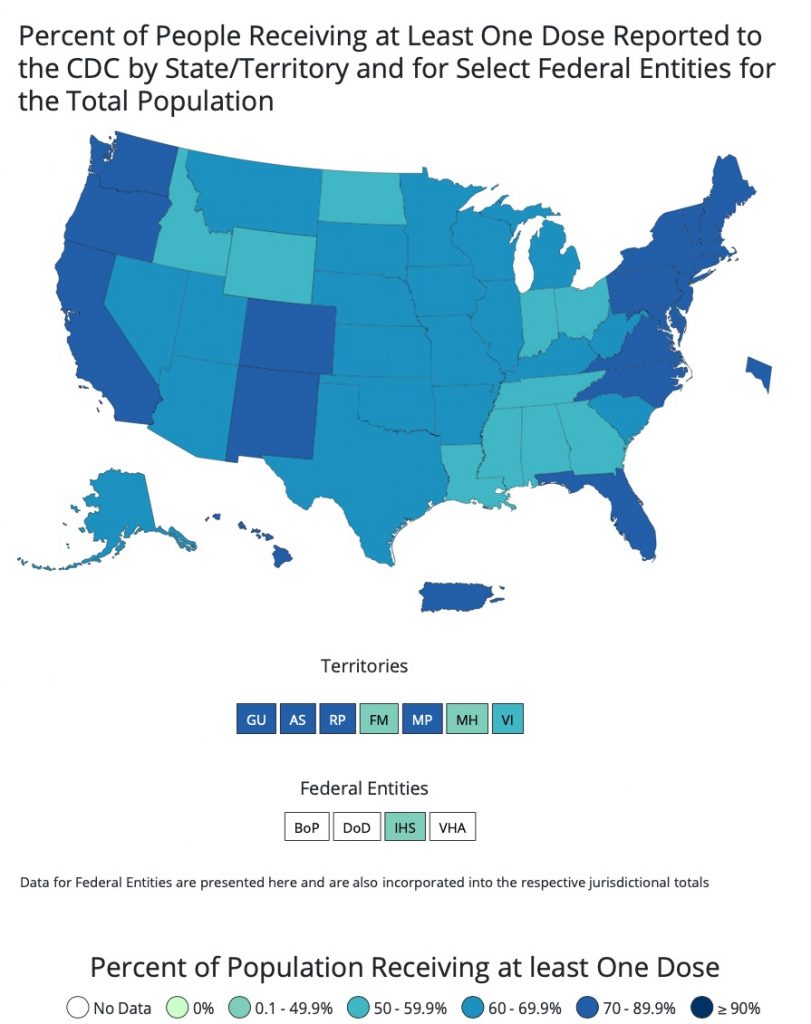 The unvaccinated are costing all of us

When a person becomes hospitalized because of illness, the cost of that hospitalization is paid for by an insurance company or the federal government (by way of Medicare, Medicaid, VA benefits, or the Federal Employees Health Benefits program). Those costs are then transferred to all Americans by higher health insurance premiums and higher taxes. At this point in the pandemic, the overwhelming majority of Americans hospitalized with COVID-19 are unvaccinated. People who are not vaccinated are 12 times more likely to be hospitalized with COVID-19. Most of the vaccinated patients who are hospitalized are immunocompromised – transplant patients, patients taking chemotherapy, and patients with immunodeficiencies. We are all paying the enormous healthcare costs for the minority of Americans who choose to be unvaccinated. 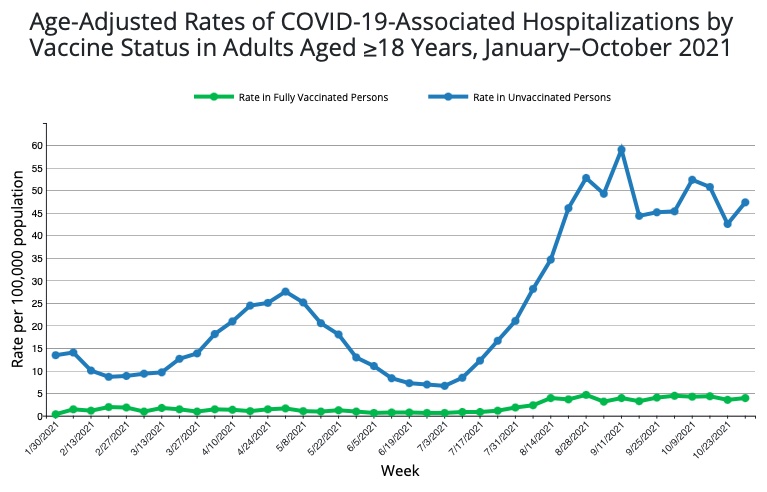 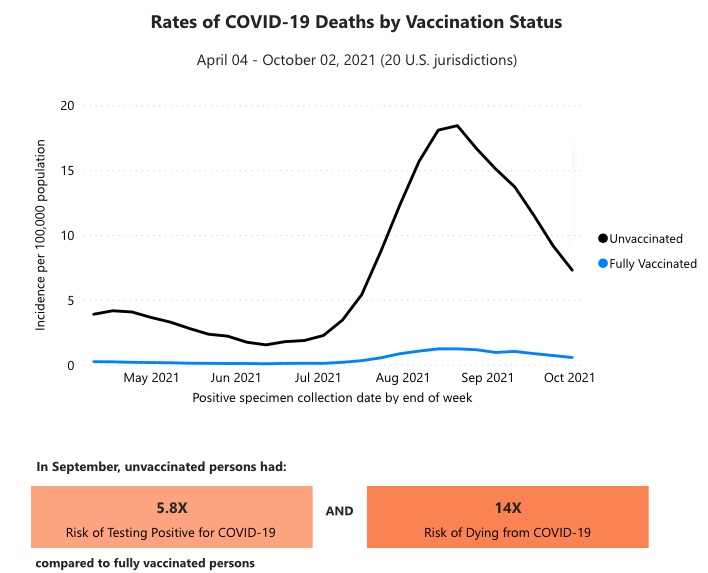 Viruses mutate – that is how they survive. Mutations occur predictably based on the number of individual viruses that exist at any given time. The more people who are unvaccinated, the more viruses are in circulation. Mutations that result in a more contagious variant then quickly become the dominant virus – it is simple survival of the fittest.

The Delta variant originated in India in December 2020. The reason? Vaccines were not yet available and India was undergoing a surge in COVID-19 cases that month. With the massive number of viruses circulating in India, the Delta variant was born.

The Omicron variant originated in South Africa in November 2021. The reason? South Africa had a very low vaccination rate with only 23% of the population fully vaccinated. Omicron causes infection that is far more contagious than the original COVID-19 infections. As an example, there were 120 people who attended a corporate Christmas party in Norway on November 26, 2021. One attendee had just arrived from South Africa and was infected with Omicron. By the end of the party, more than half of the attendees had become infected with Omicron. Fortunately, the attendees were all young (it was a corporate event – they were all of working age) and were all vaccinated so the Omicron illnesses were relatively mild and no one died (at least, not yet). Had it been a nursing home Christmas party rather than a company holiday party, the death toll would have been staggering.

Delta and Omicron will not be the last COVID variants. As long as there are groups of unvaccinated people, new and more contagious variants will emerge.

How do we bring an end to the coronavirus war?

In the beginning of the pandemic, we all owned it – every human being on the planet. Now, it is the unvaccinated who own it. To those who cry “Freedom!” in the name of being unmasked and unvaccinated, I say that if you want life to get back to a pre-pandemic normal, then get vaccinated and wear a mask. You are the ones who are holding us back. Our country prevailed in the American Revolution and in World War II because Americans had a common enemy. The SARS-CoV-2 virus is the human race’s common enemy – black and white, urban and rural, Republican and Democrat. The longer we bicker among ourselves by perpetuating a myth that the pandemic is a political issue, the more casualties the virus will inflict on us. Those who politicize the pandemic are enablers of the pandemic.