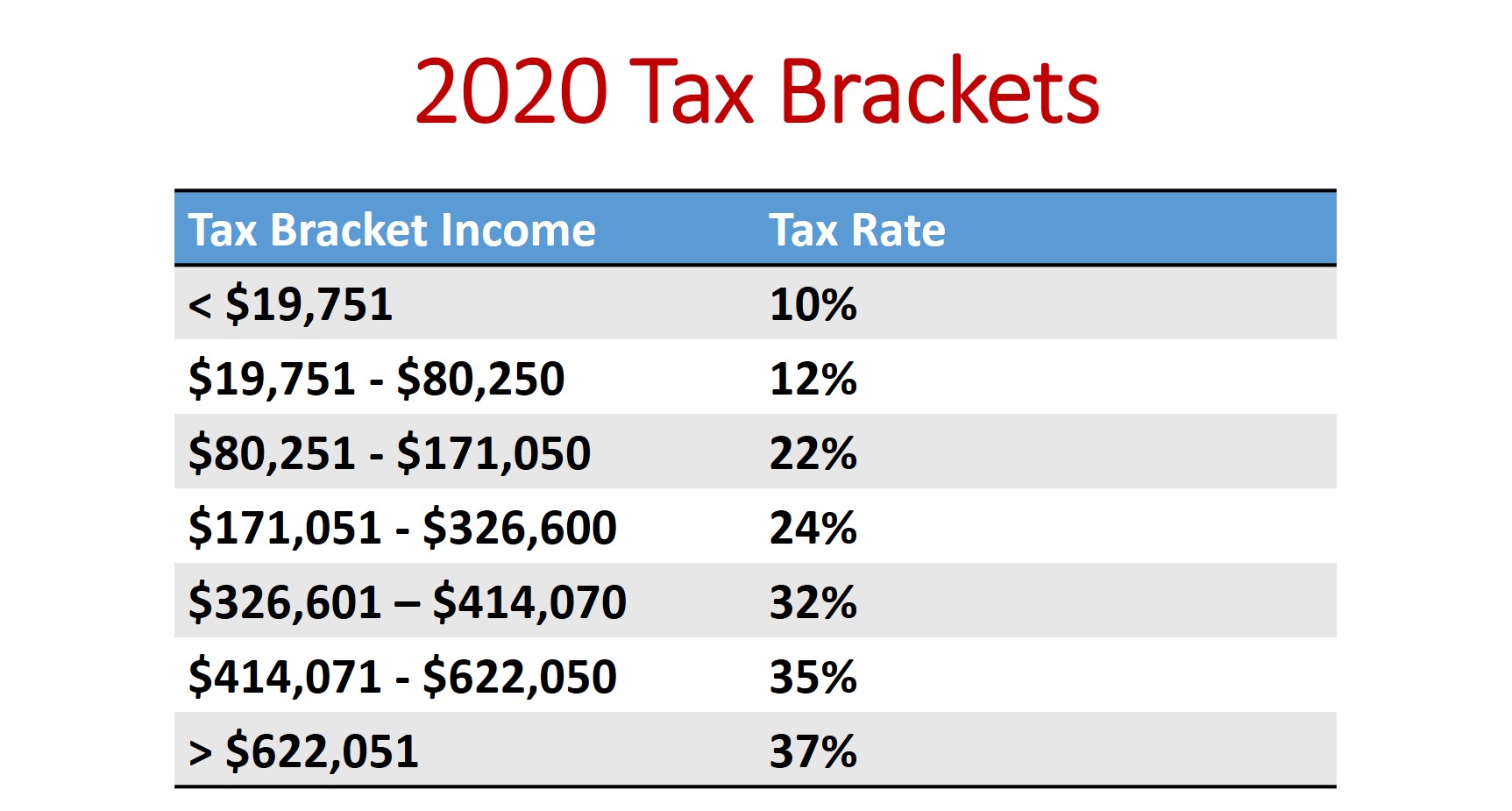 Many people mistakenly think that their income tax rate is the same as whatever the tax bracket that their taxable income falls into. But that is not exactly correct. The marginal tax system results in everyone paying the same tax rate (10%) on the first $19,751 that they make. Then everyone pays the same tax rate (12%) on the next $60,500 that they make and so on up each tax bracket. The graph below illustrates how this works: 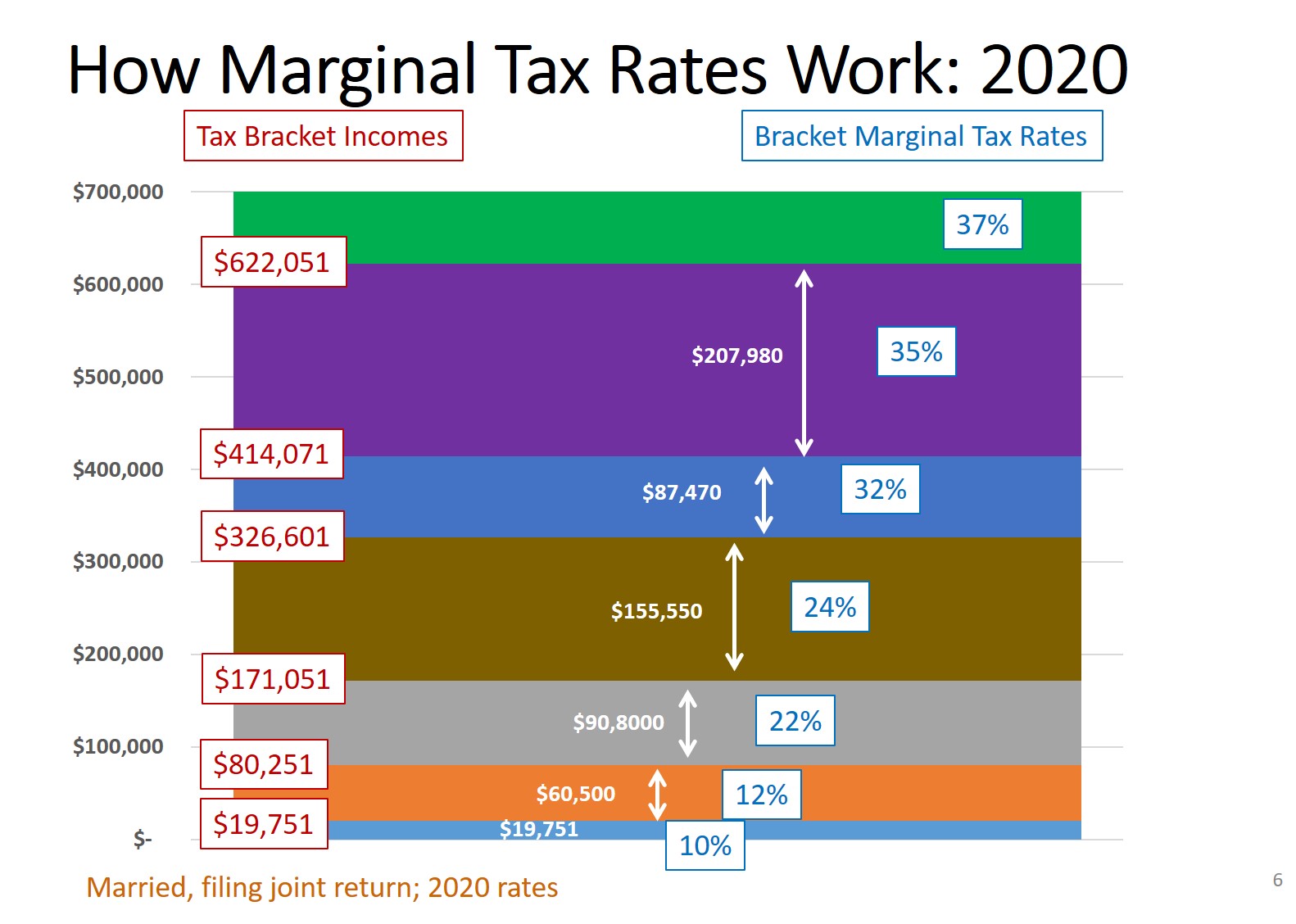 The result is that for any given taxable income a person earns, their federal income is a blend of the individual tax rates for each of the brackets that comprise their total income. In addition, each taxpayer can take the standard deduction from their gross income: $12,400 if filing single and $24,800 if married and filing jointly. The standard deduction results in everyone’s taxable income being lower than their total gross income. As a result, even people in the lowest income tax bracket pay a smaller effective tax rate than the marginal tax rate of that bracket. The next graph shows the current marginal tax brackets for Federal income tax in the dotted line and the effective tax rate in the solid line. 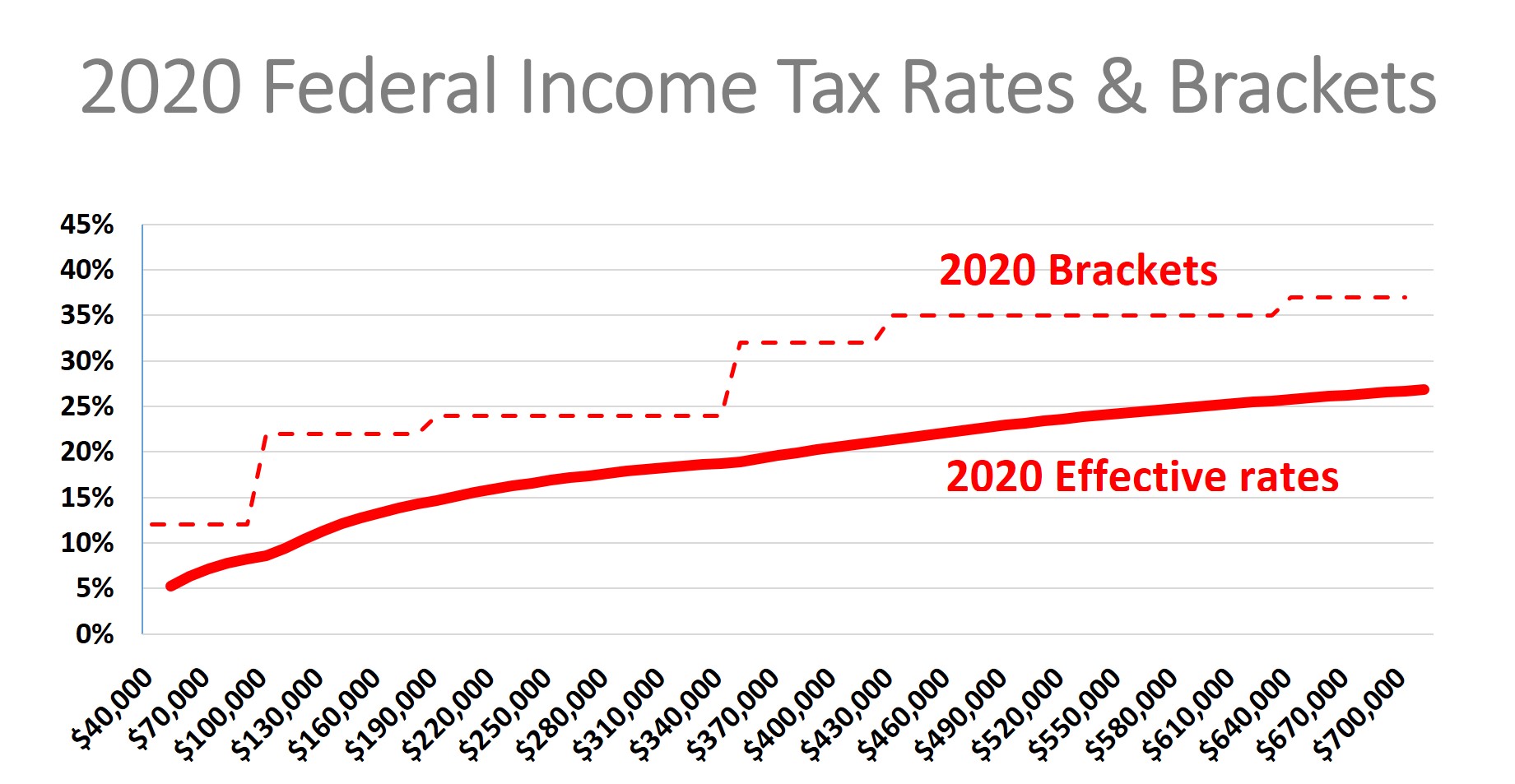 As you can see, trying to figure out what those tax bracket changes mean for any one person at any given income is difficult. So, let’s look at how the 2020 brackets affect people at different incomes: 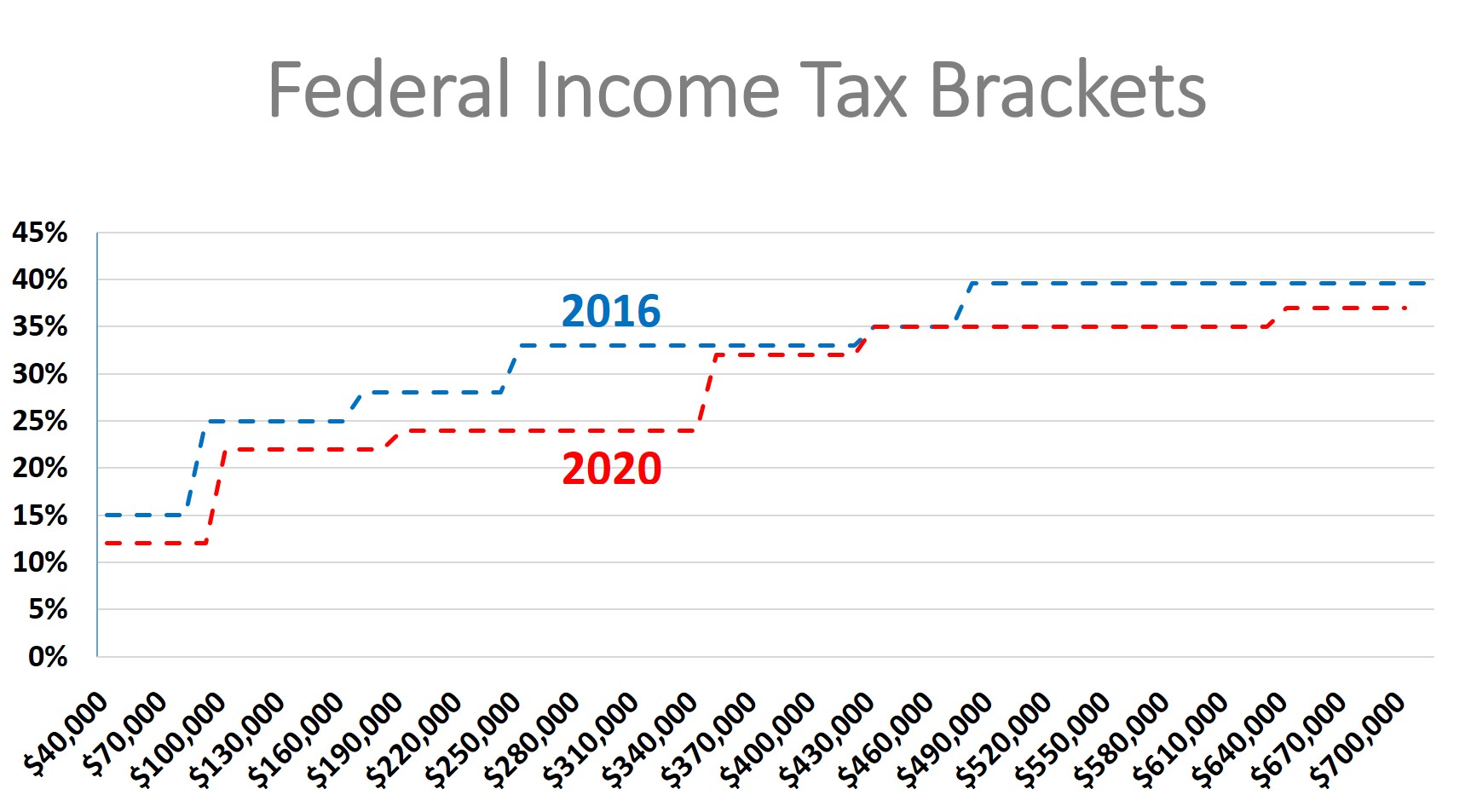 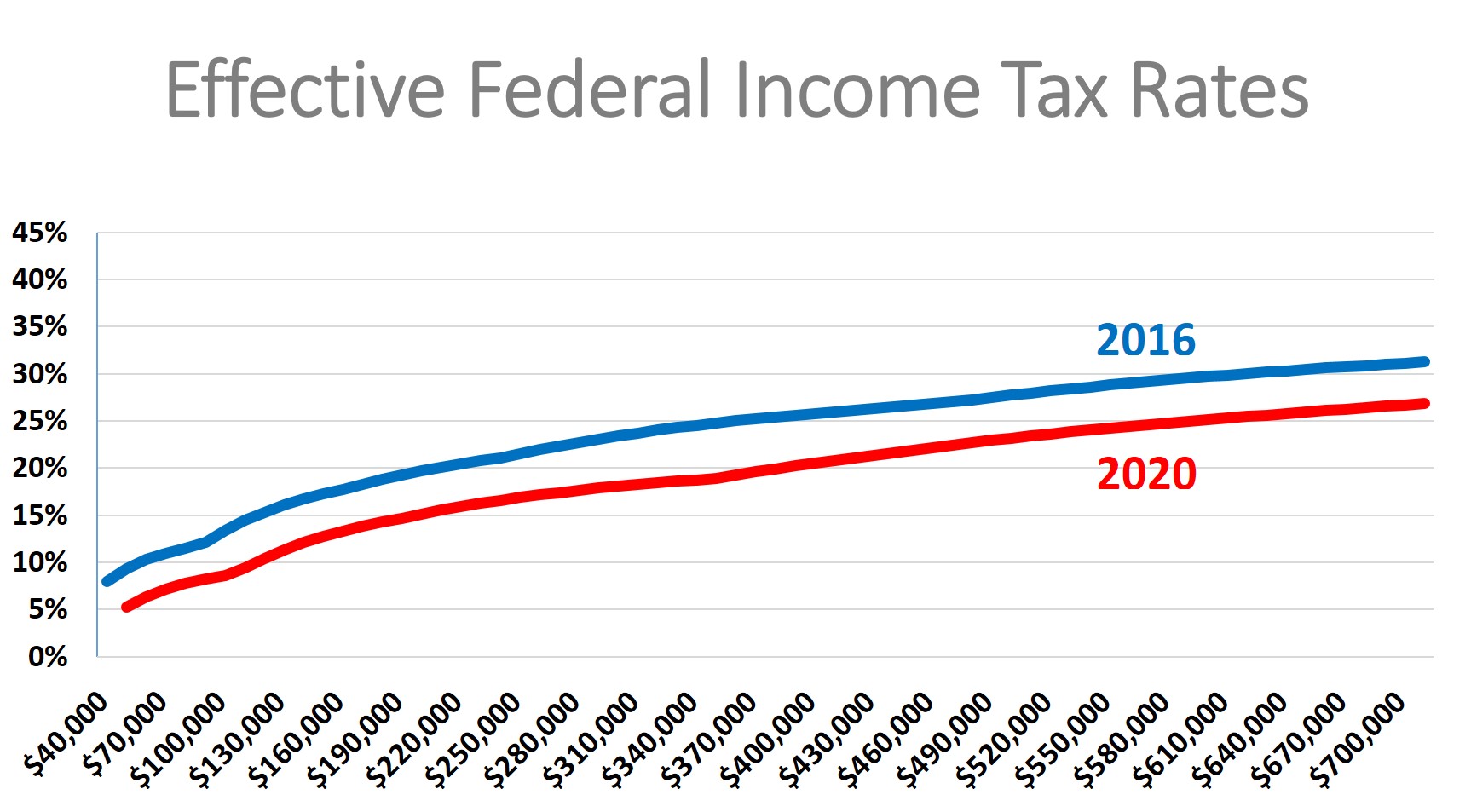 Tax rates go up and down with different administrations. Tax cuts are an enormous crowd-pleaser for voters. However, eventually, deficits catch up with tax cuts – the government cannot spend money on services that voters demand and then tax raises ensue. In general, taxes go up when Democratic presidents are in office and go down when Republican presidents are in office. The graph below shows the marginal tax rate for the highest tax bracket over the past 36 years: 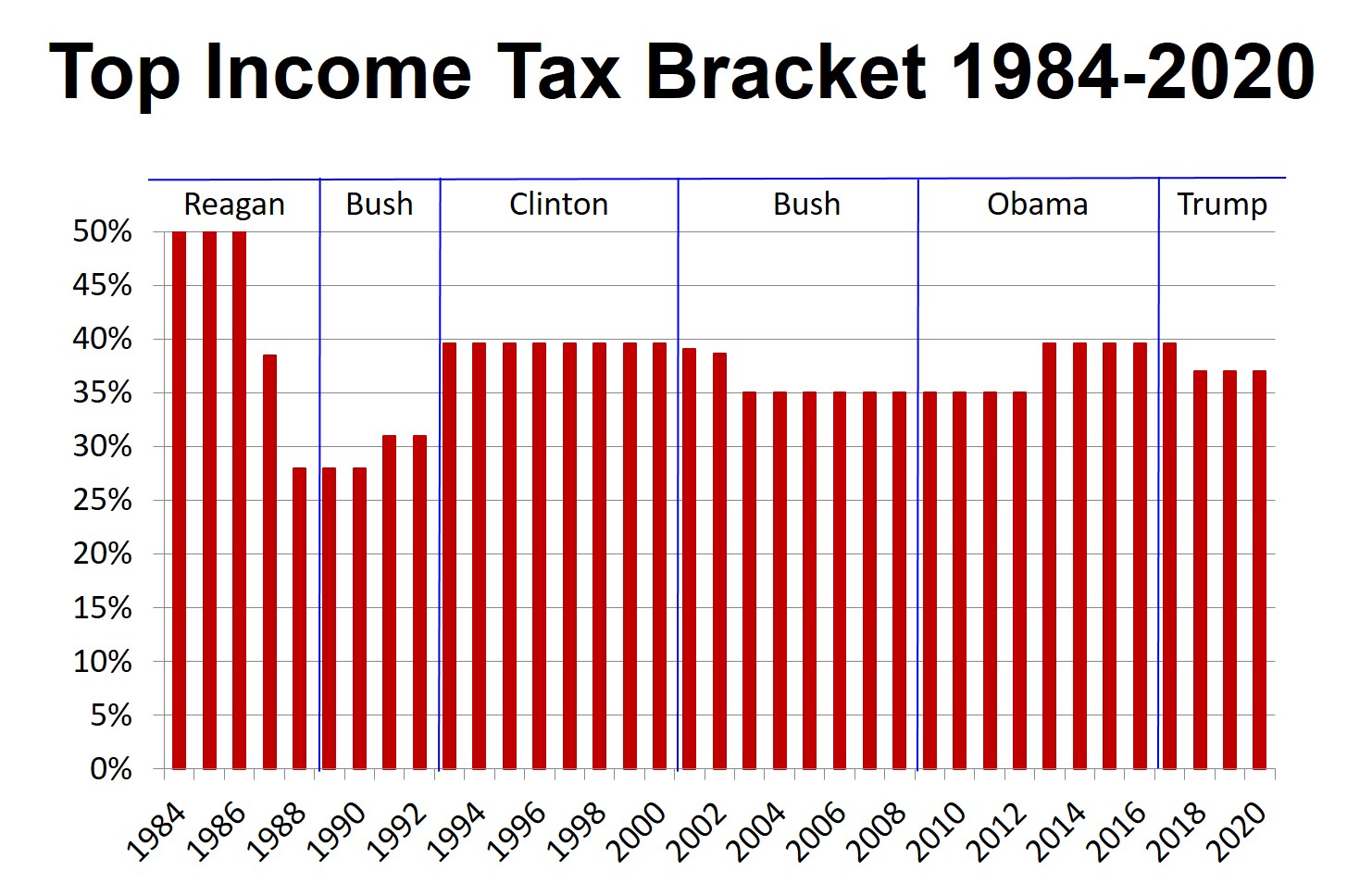 So, don’t fear being in a higher income tax bracket. Indeed, you should try to be in as high of an income tax bracket as you can. But it does make retirement planning complicated. Let’s say you have an option of putting retirement savings in a regular 401(k) or a Roth 401(k) this year. If you put money in the regular 401(k), the money will be invested pre-tax and then you will pay regular income tax on the withdrawals when you take the money out in retirement. If you instead put money in a Roth 401(k), then you will pay income tax on the money now and then you will pay no tax on the withdrawals when you are retired.  The strategy is to pay income taxes when you have the lowest effective tax rate. The problem is that you cannot predict today what the effective tax rates are going to be when you retire.

In a letter to Jean-Baptiste Le Roy, Benjamin Franklin famously wrote: “Our new Constitution is now established, and has an appearance that promises permanency; but in this world nothing can be said to be certain, except death and taxes.” I would add to that that the only thing certain about taxes is that the rates will be different in the future.