The number of inhalers available by prescription in the United States grew enormously this year. If it is hard for me as a pulmonologist to keep up with all of them, then it has got to be nearly impossible for the hospitalist or primary care physician to keep up. But with all of the new medications available, which ones actually work to help reduce readmission to the hospital after an admission for a COPD exacerbation? In my own practice, I have a lot of patients come in who are on the wrong medications – and these not only can add unnecessary expense but in some cases, they can actually make patients worse.

In 2015, the American College of Chest Physicians and the Canadian Thoracic Society partnered to create a clinical practice guideline: Prevention of Acute Exacerbations of COPD.  There is a lot of good information in it but there have been a number of important studies since its publication that are furthering our knowledge of the best ways to prevent COPD exacerbations and readmissions for COPD. The key recommendations are for a step-wise treatment for patients with COPD, starting at the lowest step and then moving up the steps if the patient’s condition warrants:

Inhalers are expensive and the least expensive, albuterol, will still run the patient about $60 per inhaler if they buy out of pocket. Inhaler prices, like prices for all medications, are hard to pin down because each insurance company will take price bids from different pharmaceutical companies for drugs like inhalers so the insurance companies almost always contract for a price that is much lower than the sticker price that an uninsured person would pay. The following is the price on GoodRx.com for common rescue inhalers:

Once a patient is on a maintenance inhaler, the cost goes up. For many years, Spiriva had a monopoly on the l0ng-acting anti-muscaric market but now, there are additional competitors.

The newest products are the combined long-acting muscarinic antagonists and long-acting beta agonists (LAMA/LABAs). Although these can be prescribed individually as a LAMA inhaler plus a second LABA inhaler, the combination inhalers are less expensive than purchasing the LAMA plus the LABA individually.

The LABAs can also be combined with an inhaled corticosteroid. For many years, the major player in the market was Advair but now there are several competitors available, including the newest, Airduo, which is essentially a generic form of Advair. 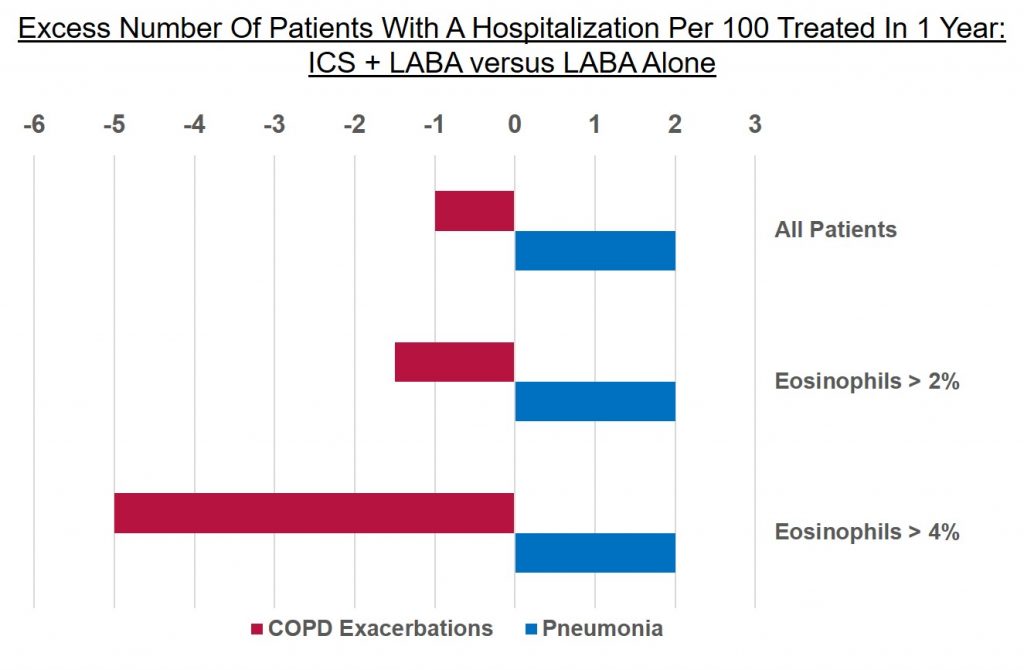 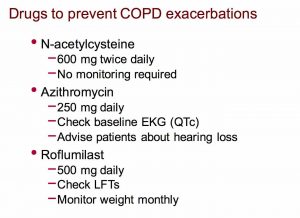 Three drugs have been shown to reduce COPD readmissions: azithromycin, roflumilast, and N-acetylcysteine. Roflumilast tends to get all of the publicity since it is a non-generic prescription medication that gets a lot of advertising; however, the monthly cost is very high. Azithromycin is a generic prescription medication that is considerably cheaper per month.

N-acetylcysteine is an over-the-counter generic medication that is very inexpensive on a per-month basis and thus gets no advertising. At this time, we don’t have head-to-head comparisons of these medications to know which one is better so I tend to start with N-acetylcysteine first, then go to azithromycin (as long as the QTc interval on the EKG is OK), and then go to roflumilast (last).

The most recent study looking at strategies to reduce COPD readmissions looked at home nocturnal mechanical ventilation using a BiPAP device. The main entry criteria was a PCO2 > 53 mm Hg. Those patients started on home BiPAP stayed out of the hospital for an average of 4.3 months whereas control patients stayed out for an average of 1.4 months. Based on this study, the use of home BiPAP at night appears to be another effective way of reducing COPD readmissions, at least in those patients with fairly severe COPD.

So, when discharging a patient with COPD, be sure that they have a PRN rescue inhaler. Pretty much anyone with COPD who has it severe enough to get hospitalized with an exacerbation warrants a maintenance inhaler, generally a LAMA. By judiciously stepping-up patients and selecting add-on medications based on the medical literature rather than on personal practice convention, patients can be maintained on the medications that are most likely to keep them out of the hospital without adding unnecessary costs. 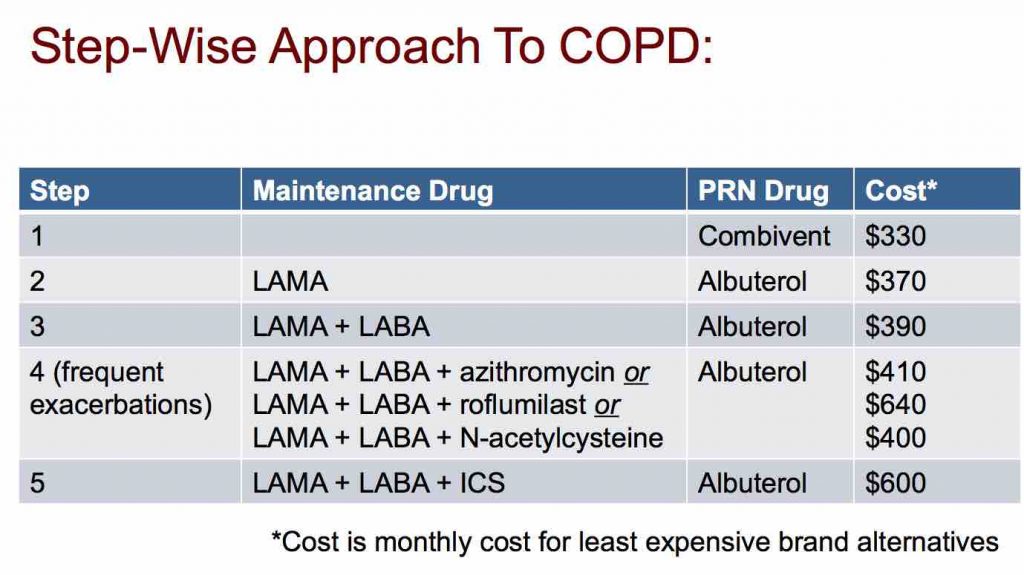