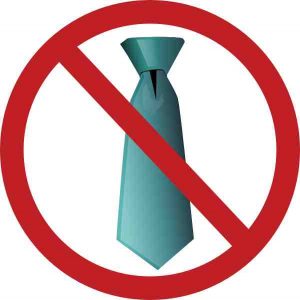 If you know me, then you know that I usually don’t wear a tie at work. For most businessmen, a tie is a necessary fashion accessory to the male work wardrobe. For me, it is a device to transfer bacteria from one to another patient.

Studies have shown that 50% of physician’s ties are contaminated by potentially pathogenic bacteria, like methicillin-resistant Staphylococcus aureus (MRSA). They dangle in all kinds of stuff when we lean forward to examine patients and we almost never clean them (come on guys, when was the last time you dropped off a couple of dozen ties at the dry cleaner?). In the United Kingdom in 2007, many hospitals took the issue of physician’s neckties to heart and prohibited them from being worn in the hospital. So why do we keep wearing them?

The men’s necktie has its origins during the 1600’s when Croatian mercenaries working for the French army during the Thirty Years’ War had a habit of knotting a handkerchief around their necks. The French picked up on it and called the knotted cloths “Croats” which got turned into “cravats”, King Louis XIV took it one step further and knotted a piece of lace around his neck and like wildfire, it became the rage all across Europe. The necktie as a fashion statement stuck and we’ve been wearing them ever since.

But neckties can do bad things to you. If they are too tight, they can make your glaucoma worse. If they get caught up in a piece of machinery, they can strangle you. And if someone wants to do you harm, grabbing you by the tie is a really easy way to do it (probably why then NFL dropped the necktie from the game-day uniform of running backs).

In our hospital, we require anyone going into and out of a patient room to sanitize their hands with alcohol hand sanitizer that we keep on the corridor walls every 10 feet or so. But so far, we haven’t invented necktie sanitizers to use after patient encounters.

Personally, I never got the whole necktie fashion thing. I always thought that they were kind of uncomfortable and were always getting in my way. So when I read the recent articles on bacterial colonization of physician ties, I rejoiced because I now finally have an excuse to not wear a tie to work.