But what if I don’t have a traditional IRA?

The third way of putting money into a traditional IRA is to do a rollover from an employer-sponsored retirement plan. These plans include the 401(a), 401(k), 403(b), and 457 retirement plans. There is not a limit to the amount that you can rollover each year. There are several important rollover rules, however:

Beware of the 5-year rule

When you put money into a Roth IRA, that money grows tax-free and you do not have to pay any tax on withdrawals when you take the money out in retirement. That means no income tax, no capital gains tax, no interest tax, and no dividend tax. Furthermore, unlike other deferred income accounts (such as a traditional IRA, 401(l), 403(b), or 457), there are no annual required minimum distributions from the Roth IRA after you turn age 72.

Because of the 5-year rule, you should consider any Roth conversion to be a long-term investment. In other words, don’t put the newly converted money into a low rate of return investment such as a money market account or certificate of deposit within the Roth account. Money from Roth conversions should ideally be put into a broad stock market index fund in the Roth account. In the past 30 years, there have only been 2 times that the S&P 500 index took more than 1-year to recover from a downturn: in 2000 (7 years to recover) and 2007 (6 years to recover). In both of these prolonged downturns, if you had waited to do a Roth conversion until the S&P 500 index had fallen by 15% of its peak, you would have only had 3 1/2 years to recover after the 2000 downturn and only had 2 1/2 years to recover after the 2007 downturn. In both cases, your Roth fund would have fully recovered and then increased in value by the time the 5-years was past.

How should I time my Roth conversion during a bear market?

One of the simultaneously wonderful and maddening things about the stock market is that no one can predict when it is going to go up and when it is going to go down. In a bear market, when stock prices are falling, the only way to know for sure when prices have bottomed out is in retrospect, after prices have started to rise again. Rather than trying to guess when stock prices have hit their lowest and then doing your Roth IRA conversion, it is safer to spread your conversion out and do multiple small conversions every month or two.

Unlike a rollover from an employer-sponsored retirement plan into a traditional IRA that can only be done once per year, you can do many Roth conversions per year. There is no limit to the number of traditional IRA to Roth IRA conversions you do each year nor is there a limit to the amount that you can convert. However, it is important to remember that the money that you convert from a traditional IRA into a Roth IRA is taxable income by IRS definitions. Therefore, the money that you convert will not only be subject to federal income tax but it will also add to your total taxable income for that year. As your annual taxable income goes up, your effective income tax rate will also go up. At some point, the amount that you convert will result in a large enough increase in your federal income tax rate to outweigh the advantages of doing a bear market Roth conversion.

Which investments should I convert?

If you have been a prudent investor, then you will have a diversified retirement investment portfolio. Your deferred income accounts may include your 401(k), 401(a), 403(b), 457, 415(m), and traditional IRA accounts. Within these deferred income accounts, you should have a mix of U.S. stock mutual funds, foreign stock mutual funds, U.S. bonds, foreign bonds, real estate investment trusts, and cash. The best individual investments to convert are those that have lost the most value in a bear market. Because bonds are less volatile than stocks, the value of stock mutual funds will generally fall more than the value of bond mutual funds and thus it is generally not a good idea to convert bond funds. It is almost never a good idea to convert cash (including money market accounts and certificates of deposits) since there will be no (or very little) tax advantages to convert these accounts in a bear market.

It is wise to regularly replenish your traditional IRA by doing rollovers from your employer-sponsored retirement plans (assuming you are eligible to do rollovers, as discussed above). Since you can only do one rollover per year, you will want to do a sizable enough rollover to allow you to maximize any Roth IRA conversions that you might do later that year. Ideally, you should start each year with enough money in your traditional IRA to fund bear market Roth IRA conversions later in the year since no one can predict when a bear market will occur. You want to be prepared so that you can take advantage of those bear markets to do your Roth conversions. As an example, on January 3, 2022 when the NASDAQ composite index closed at 15,832, investors did not anticipate that the NASDAQ would fall by 29% to 11,264 less than five months later on May 24, 2022.

It’s all about investment strategy 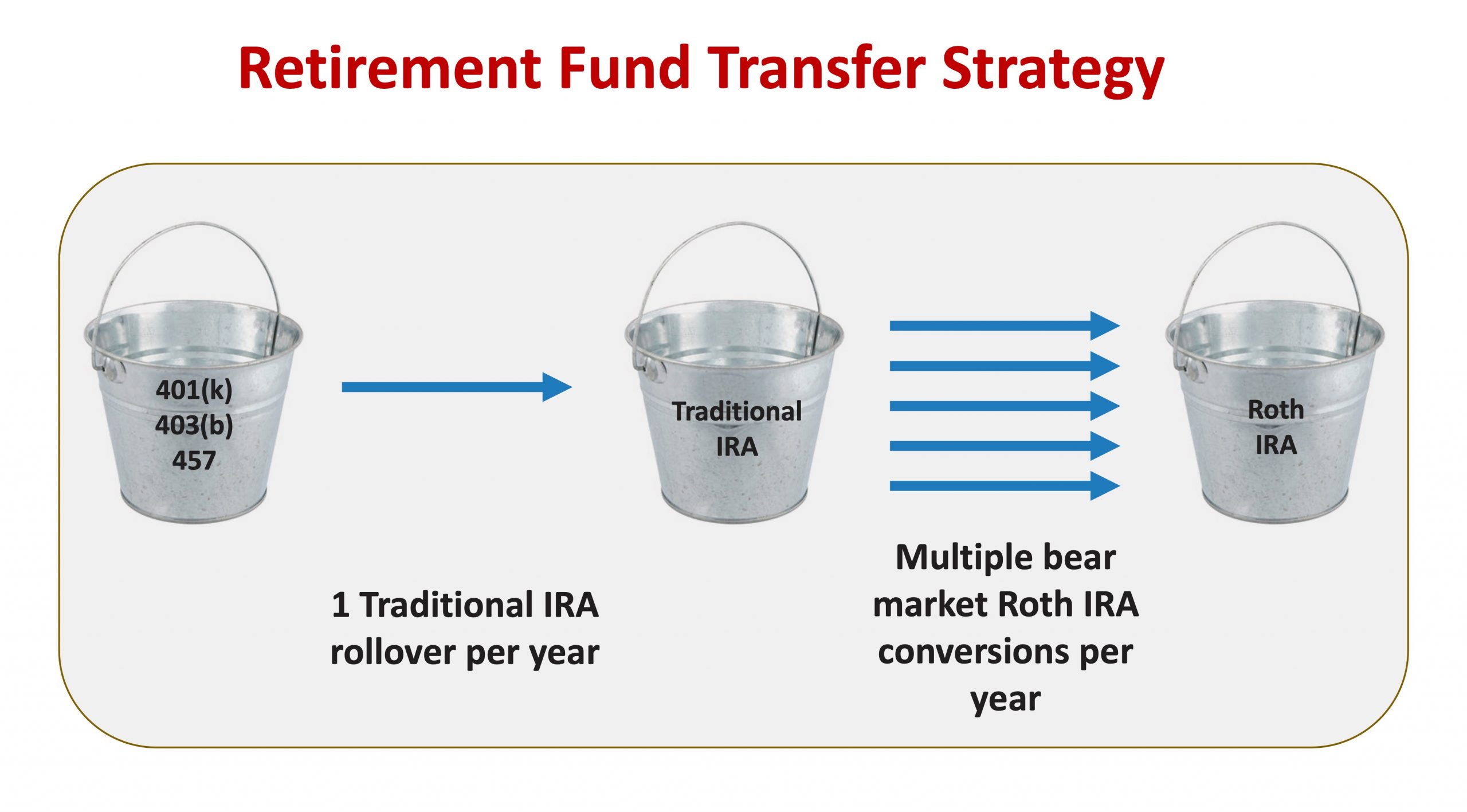