I was asked to give a talk to the new internal medicine interns this week and it gave me a chance to think about what it is that we are training them for. Wayne Gretzky famously said “I skate to where the puck is going to be, not where it has been.” If we are going to be effective teachers of medicine, we need to train our interns and residents for the way medicine will be, not how it was in the past or even how it is now. So, what will medicine look like 16 years from now in 2035? The Accreditation Council for Graduate Medical Education (ACGME) has created a vision for medicine in 2035 to help residency programs prepare tomorrow’s practicing physicians. I agree with a lot of what the document concludes and I’ve added some of my own projections about what medicine will be like in 2035:

It is going to be more complex. As we learn more about the causes of disease and as we develop more specifically targeted treatments for disease, the complexity of medicine will increase exponentially. Take the example of oncology: 20 years ago, a physician would specialize in hematology & oncology and that was pretty much the end of the story. As knowledge and treatments increased, the discipline split so that physicians either became a hematologist or an oncologist. Now, oncology has split further so that a physician becomes a breast cancer oncologist, or a lung cancer oncologist, or a gastrointestinal cancer oncologist. In the past, lung cancer was either small cell or non-small cell lung cancer; now non-small cell lung cancer is subdivided into many different varieties based on specific driver mutations and each of these varieties are treated differently. As we further subdivide diseases into different groups based on biochemical or genetic differences, we get newer and more complicated drugs to treat them with. Last year, the FDA approved 59 new drugs; at that pace, there will be nearly 1,000 new drugs on the market in 2035 that do not exist today.

Medical information will become more transparent. In the past, medical information was locked away in a paper chart stored on a shelf in a hospital medical records department storeroom. Now, the finest details of patients’ medical history, lab test results, and x-rays are available to just about any physician in the country who is involved in the care of that patient. In minutes, I can have radiographic images appear on my computer screen from a chest CT scan a patient had in California earlier that morning. Patients can view all of their test results and even their doctor’s progress notes real-time. Information transparency shows no sign of letting up and more people will be able to access more health information than ever before. Not only will patient medical information become more transparent, but the way we take care of patients will become more transparent. Already, you can see what any given hospital’s readmission rate, emergency department waiting time in minutes, and surgical complication rate is with a quick trip the the Medicare website.

Commoditization of medicine will increase. Health care in the United States is a business. Already, hospitals are buying and selling physician practices, healthcare systems are acquiring hospitals, and health insurance companies are merging with drug store chains. Hospitals are now federally mandated to publicly post the prices for all of their services. There is pressure to reduce costs by using the least expensive employees to provide care. Non-traditional healthcare locations are being used where profit can be made. You don’t need to look any further than your local pharmacy where medications are dispensed based on a patient’s insurance formulary, the pharmacists will administer vaccinations directly to patients, and a nurse practitioner will manage common acute illnesses in a “minute clinic” – all of which were decisions previously made by and services previously provided by physicians. Americans are entrepreneurial to the core and the business of medicine will increasingly mimic the business of other commodities.

Advanced practice providers will increase. 2013 was the last year that there were more MD degrees awarded in the United States than CNP degrees. The certified nurse practitioner workforce is increasing exponentially. 20 years ago, nurse practitioners worked for physicians as so-called “physician extenders” and did not prescribe medications. Now, NPs work independently and have prescriptive authority. It makes sense – it takes 2 years of education after a bachelor’s degree to become an NP but it takes 7 years of education after a bachelor’s degree to become a family physician. In addition, the typical NP salary is less than half that of a family physician. So, if an NP can do the same thing as a primary care physician at half the cost and with 28% of the training, the commoditization of medicine will encourage hospitals and clinics to hire NPs into roles that they would previously have hired physicians. In the U.S. graduation class of 2017, there were 26,000 NP graduates, 19,259 MD graduates, and 8,336 PA graduates. In the near future, it is likely that the annual number of physician assistant graduates will also exceed the number of physician graduates, just like nurse practitioners already do. Medicine will increasingly be a team sport with physician playing a more smaller role in the team than in the past

Artificial intelligence will proliferate. IBM’s Watson is just the first, rudimentary foray into the use of computers in disease diagnosis and management. Already, I have patients who type 4 or 5 of their symptoms into Google and come to the office asking if they could have whatever disease appears on their Google search. And why shouldn’t it be this way? Physicians are forever missing diagnoses, overlooking test results, and choosing the wrong drug. For years, the mantra of hospital quality departments has been to standardize care and no one can standardize better than a computer. 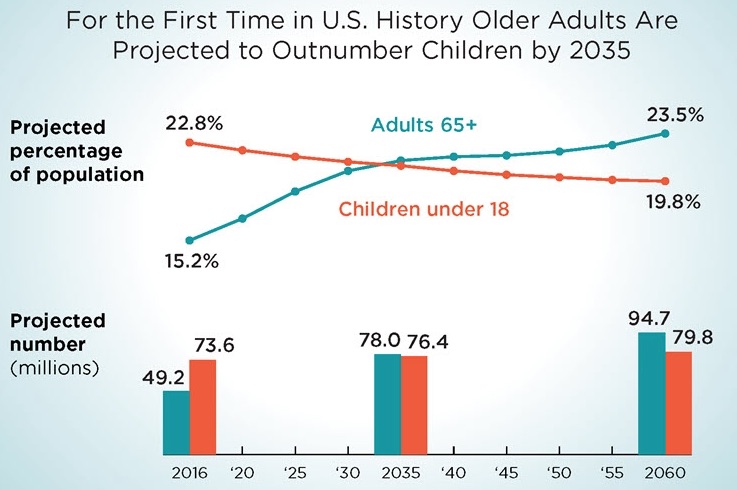 The patients will be older. The U.S. demographic is changing and in 2035, the number of older Americans will exceed the number of young Americans. This will increase the demand for physicians who provide care to the elderly, such as geriatricians and orthopedic surgeons. As the percentage of Americans over age 65 increases, so will the influence of Medicare on American healthcare as Medicare assumes a more dominant role in U.S. health insurance.

Many of today’s skills will become obsolete. As an intern in 1984, I was required to offer to do a rigid sigmoidoscopy to every patient over age 60 who was admitted to the hospital; I did a lot of rigid sigmoidoscopes that year. Bronchoscopy was not readily available so we would do transtracheal aspirates using an angiocath and a syringe if we needed a sputum sample in a patient who couldn’t cough it up. If I did a lumbar puncture in the middle of the night, I was expected to do a diff quick stain, a gram stain, an India ink prep, and an acid fast stain of the spinal fluid in the residents’ lab down the hall from the ICU.  And if a patient had unexplained thrombocytopenia, it was the intern’s job to get a bone marrow biopsy tray, do a bone marrow aspirate, and then stain that aspirate before rounding with the attending physician. As interns, we did all of the blood cultures and the EKGs. Today, no intern or resident is required to do any of these things; in fact, we don’t even let our residents do their own specimen stains due to CLIA restrictions. In 2035, new interns will chuckle when they hear about the “bad old days” in 2019 when doctors did all sorts of procedures that were replaced by better ways of doing things.

A lot of today’s knowledge will turn out to be wrong. Perhaps the most visible manifestation of this is in advanced cardiac life support (ACLS). As a critical care physician, I’m required to re-certify in ACLS every 2 years and since I first took it in medical school, I’ve taken the ACLS course 18 times. Each time, the guidelines are a little different and the correct answers to the questions on the test you have to take are different. It turns out that many of the drugs we used didn’t actually work and the best way to “run a code” turns out to be completely different than what we thought it was. In my first year of medical school, one of the professors told us that 50% of everything we were about to learn will turn out to be wrong… and he was right. The only unchangeable thing about medicine is change itself. 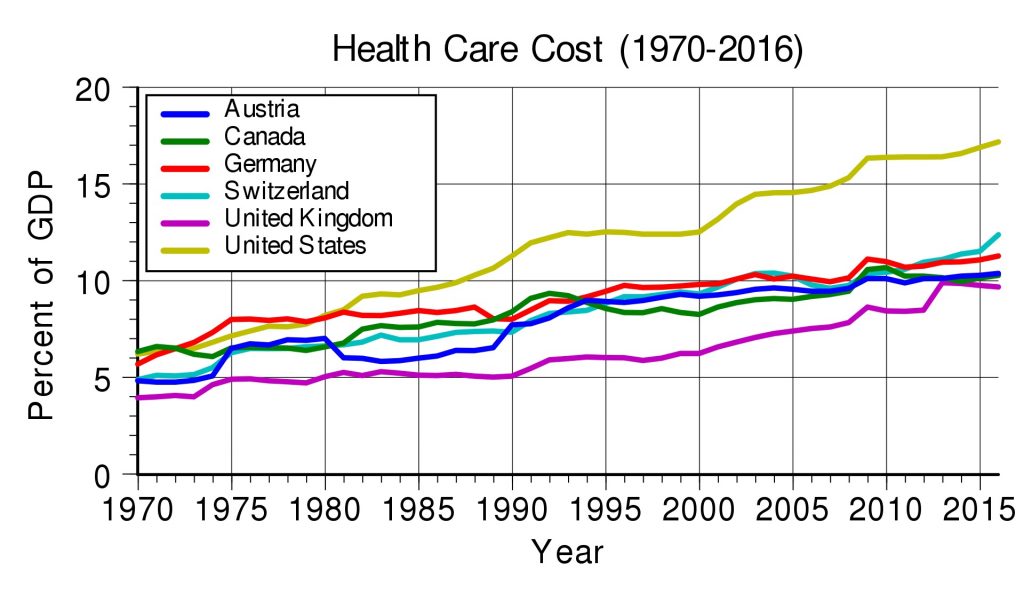 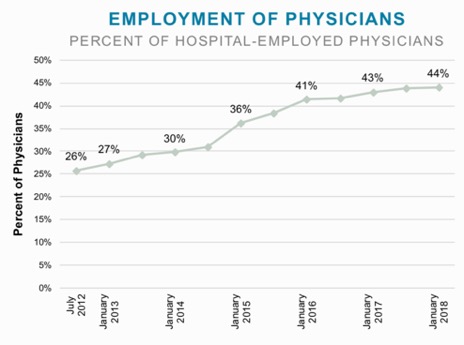 The solo practitioner will become extinct. Physician employment models have changed unfathomably fast in the past decade. In just 6 years, the percentage of physicians who are hospital-employed increased from 26% to 44% nationwide. However, there are substantial regional differences such that in the Midwestern United States, 55% of physicians are now employed by a hospital. The solo practitioner or even the small physician group cannot negotiate for favorable payment rates from health insurance companies – only very large groups and larger health systems have the clout to negotiate high payments for physician services from insurance companies. Furthermore, as medicine has become more regulated, it it harder and harder to be sure that you are practicing according to the rules: physicians have to have sufficient support staff to be sure that billing is compliant, HIPAA laws are not violated, and the electronic medical record network is regularly updated – it takes a lot more staff than a solo practitioner can afford to hire. The solo practitioner is not a viable business model for the future. 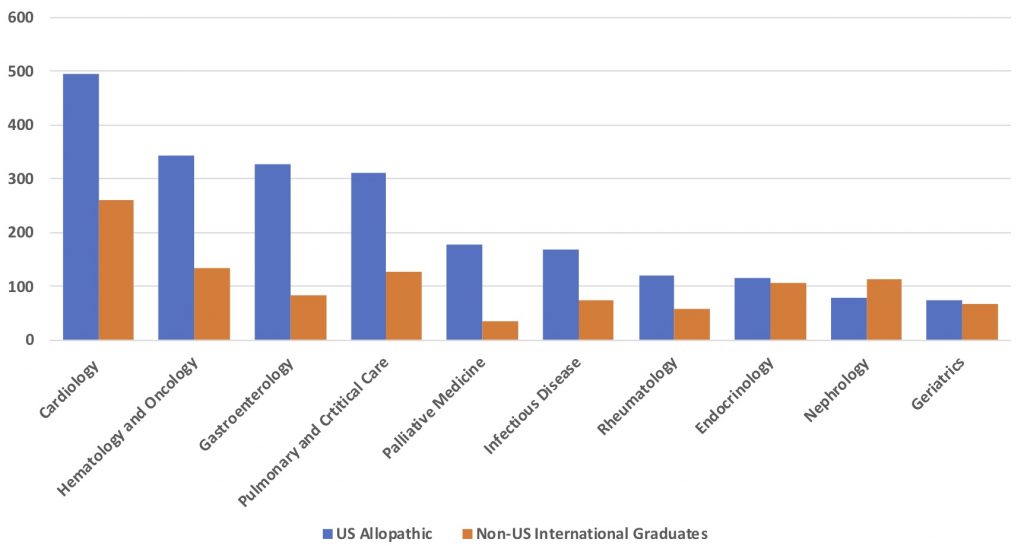 Results of the 2019 fellowship match 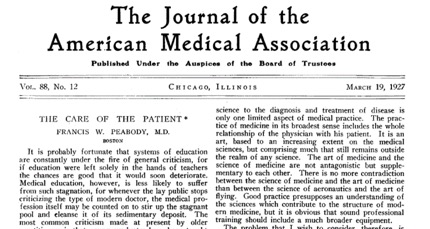 Is there anything that won’t change? The good news is, yes, and no one said it better than Francis Peabody who wrote in his 1927 article in the Journal of the American Medical Association: “... the secret of the care of the patient is caring for the patient.” That tenet held true in 1927, still holds true today, and will hold equally true in 2035. No matter how much we come to depend on artificial intelligence to help us diagnose and manage disease, no matter how many more NPs and PAs are trained, and no matter how commoditized medicine becomes, one quality of being a physician that won’t change is in caring for the patient. Humanism is that one unchangeable thing.

Two days ago, I was leaving the hospital and I heard the overhead announcement "Code Blue, front entrance to the hospital". Nine times out of ten, this is because someone...

The 2017 Medicare Hospital Star Ratings: Better But Still Not Perfect