Ohio has become the 35th state to join the Interstate Medical Licensure Compact. The Compact permits a physician in one state to easily obtain an expedited medical license in a different state. So, should you apply to the Compact?

What is the Interstate Medical Licensure Compact?

The emergence of telemedicine in the 1990’s was accelerated in the early 2000’s by the use of electronic medical records. When telemedicine occurs across state lines, medical care is defined as occurring in the state that a patient is in, not the state that the physician is in. Therefore, physicians who practice telemedicine must have a separate medical license for each state that their patients reside in. The requirements for licensure differ from state to state with each state requiring separate applications, background checks, verification of training, and professional references. This process was often expensive and took several months. In 2014, a group of leaders from several state medical boards got together to develop a streamlined process for obtaining a medical license in more than one state and in 2017, the Interstate Medical Licensure Compact became operational.

In the past 4 years, more and more states have joined the Compact. Currently, 36 states are either active in the Compact or have legislation introduced to join the Compact. There are 14 states that are not members of the Compact and have not initiated the process of joining the Compact. These include all of the states shaded in gray below, most notably: New York, Florida, and California. 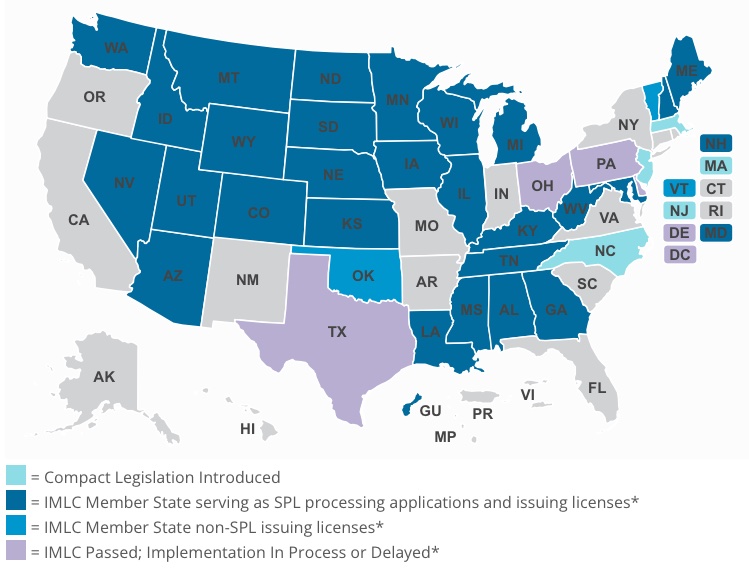 The Compact is administered by the Interstate Medical Licensure Commission. The Commission in turn is composed of 2 commissioners from the state medical boards of each participating state. As of June 2021, the Compact had processed 14,037 applications and had issued 20,976 medical licenses.

There is an analogous organization for nurses called the Nursing Licensure Compact that was originally developed in 2000, much earlier than the Interstate Medical Licensure Compact. The nursing compact has 38 currently active participating states with pending legislation in 8 more states.

Who is eligible to apply?

The first requirement is that a physician designate a State of Principal License, or SPL. A physician’s SPL must meet at least one of the following requirements:

In addition to designating an SPL, there are other requirements for a physician to participate in the Compact. The physician must meet all of the following:

Lastly, there are several exclusions to participating in the Compact. The physician cannot have any of the following:

Physicians who meet all of these criteria are eligible to apply to participate in the Compact. It is estimated that about 80% of U.S. physicians in participating SPL states are eligible.

What is the application process?

Physicians meeting the eligibility criteria apply to the Compact by paying a $700 application fee and getting a criminal background check (including fingerprints) from their State of Principal Licensure. The application is done on-line at the Compact’s website.

In addition to the $700 Compact fee, there is also a fee charged by each state for a medical license. The fees vary from state to state and range from a low of $75 (Alabama) to a high of $790 (Maryland) with most states running around $300-$500. The fees for each state can be found by clicking here.

The average number of licenses that each physician obtains through the Compact is three. The average amount of time it takes to get each license is 19 days with 51% of licenses available within a week.

If a physician only intends to practice in the state that he/she resides in, then there is no need to apply to the Compact. However, there are 5 groups of physicians who can benefit from obtaining additional state medical licenses through the Compact.

Locus tenens. Physicians who practice at hospitals or medical practices for short-term employment can more easily obtain licenses for the various states that they anticipate working in.

Physicians seeking new jobs. The standard application process to get a medical license can take a long time – for most states it takes about 3 months but in some states it can take up to 9 months. This can be a problem for residency and fellowship graduates obtaining their first job out of training if it is in a different state than their training program is located. This is also a problem for physicians who are changing jobs to a new practice in a different state. By expediting the licensure process, the Compact can greatly reduce the time required to get a license in a new state.

Medical volunteerism. Physicians often donate their time for providing free care to the underserved. By facilitating licensure, physicians will now be able to more easily provide that care to underserved populations in other states.

Telemedicine. This is perhaps the area of medicine that benefits the most from the Compact. Since telemedicine occurs in the state that the patient is located in, if a physician does not have a license in that particular state, then the physician cannot legally practice medicine via telemedicine with that patient. This was a particular problem for me in my subspecialty interstitial lung disease practice since many of my patients lived in West Virginia, Kentucky, Indiana and other states. Also, many of my patients would winter-over in southern states. If these patients had a medial issue arise while out of Ohio or if they just needed a regularly scheduled visit, they had to travel to within Ohio’s borders for me to legally do a telemedicine visit. During the early part of the COVID pandemic, I did most of my outpatient practice via telemedicine. However, many of my patients living in West Virginia had to either drive to Columbus for an in-person visit or forgo their regular visits since I did not have a West Virginia medical license and could not legally do telemedicine with them in their homes. During COVID, many states waived the telemedicine requirements so that out-of-state patients could legally have telemedicine visits with their doctors (but Ohio was not one of them). Even something as simple as prescribing an antibiotic for a patient with bronchitis or a course of steroids for a patient with an asthma flare is legally risky if that patient calls the office from another state. The Compact permits physicians to practice telemedicine in most states that their patients are located in without requiring those patients to travel the often long distances to get to the physician’s office for an in-person visit.

Just because a physician has a license to practice in a specific state does not mean that their medical malpractice insurance will cover them in that state. This can be a particular problem with telemedicine – there is no guarantee that their policy covers telemedicine when the patient is out of state. Medical malpractice premiums vary considerably from one state to another, depending on a number of factors. Some states have passed malpractice reform legislation that has sharply reduced malpractice lawsuits in those states. In some states, there are limits to the monetary amount of malpractice claims. In other states there is a culture of litigiousness. All of these factors affect the cost of malpractice insurance. As an example, the average internal medicine physician’s malpractice premium is $3,261 in Wisconsin and $15,436 in Florida.

Before obtaining additional state medical licenses for telemedicine purposes, physicians should check with their medical malpractice insurance company to find out if they will be covered to do telemedicine in those states. Many physicians will be required to purchase additional multi-state liability coverage. Large medical centers that are self-insured may not permit their physicians to practice telemedicine in other states, particularly those states that are considered high-risk for malpractice lawsuits.

The future of the Compact

Ideally, all states would join the Interstate Medical Licensure Compact. However, there is a greater need for certain states/territories to participate in the Compact. Alaska, Hawaii, Puerto Rico, and the Virgin Islands could all benefit from participation because of their remoteness – by expediting medical licenses from out-of-state physicians, their citizens would have greater access to specialized care via telemedicine. As an example, there are no lung transplant centers in these states and territories. There is also a greater need for Florida to participate in the Compact given the number of people in the East Coast and Midwest who spend winters in Florida. By facilitating medical licensure for these winter resident’s out of state physicians, better continuity of care can be delivered.

Because participation in the Compact requires endorsement by each individual state’s medical board and requires approval by the legislature of each state, action to get all of the remaining states and territories must start from grass root efforts within each of these states and territories. The medical communities of some of these states could feel threatened by more out-of-state physicians providing medical care by telemedicine that would otherwise have been provided by physicians located in those states. However, the overall cost of medical care could be reduced by facilitating out-of-state telemedicine – it is far less expensive for a patient vacationing in Florida who develops a poison ivy rash to have a telemedicine visit with their primary care physician back in Michigan than to go to an emergency department in Florida.

The group that has perhaps the greatest potential benefit from the Compact are academic medical centers. Most are self-insured and can control the malpractice barrier to out-of-state telemedicine practice. By expanding their telemedicine reach to other states, physicians in academic medical centers can specialize in very specific diseases. For example, there may not be enough Ohioans with Birt-Hogg-Dube syndrome to support a practice specializing in Birt-Hogg-Dube but by marketing a telemedicine practice throughout a multi-state area, an enterprising academic physician could create a specialty clinic to optimize care to large numbers of patients with this rare disease and to develop research protocols for their evaluation and treatment. This is a golden opportunity for academic program development and for promotion & tenure pathways.

Physicians employed by the Veteran’s Administration and by the U.S. military can practice anywhere in the country as long as they are licensed in any one state. It is unlikely that a similar model will be adopted for non-governmental civilian medical licensure in the foreseeable future. However, the Compact is the next best option and our medical communities need to take the initiative to secure participation by all 50 states and all U.S. territories.