Two days ago, I was leaving the hospital and I heard the overhead announcement “Code Blue, front entrance to the hospital”. Nine times out of ten, this is because someone slipped and fell and a panicked visitor will run into the front lobby yelling something about cardiac arrest. But as I’ve mentioned in a previous post, you just don’t know until you know and so we treat every code blue as an emergency, regardless of its location.

Our hospital’s chief of cardiology and I arrived at the same time. There was a minivan at the front entrance of the hospital and an animatedly hysterical woman standing at the side with an unconscious young man in the front seat. We asked a couple of quick questions: “Does he have diabetes?”, “Does he have seizures?”, “Did he take any street drugs?”. The answers were no, no, and he “just smoked a little weed”. I took a quick check of his forearms – no needle marks.

He had a strong pulse and was breathing regularly but the best we could do was to get him to briefly open his eyes with stimulation. His pupils were small. We managed to get him out of his car and onto a patient cart. A quick oximetry check showed his oxygen saturation was 94%. We raced him to the emergency department which meant down a hallway, up one level in an elevator, and down another hallway. While we were in route, I called to the ER and spoke to our emergency department’s medical director, who happened to be on duty that evening. As we were wheeling the guy through the hospital, I told him to have a dose of intranasal Narcan ready when we arrived. 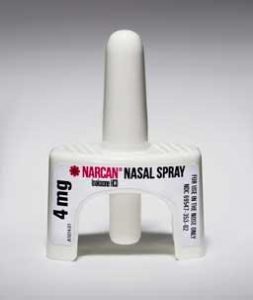 About 7 or 8 minutes after the code blue was first called, we got him into a room in the ER. By that time, he was pretty much unresponsive. Before vital signs, blood draws, or hooking him up to a cardiac monitor, he got a dose of Narcan sprayed into his nose. About a minute later, he sat up asking what was going on. He got opioids somehow – either he was snorting heroin or injecting in some unobtrusive part of the body that wasn’t easily visible. Marijuana laced with fentanyl or carfentanil is always something that we worry about but it is probably pretty uncommon.

But from an emergency response standpoint, it was pretty clear that the guy was going to die if nothing was done. In patient care areas, we keep a “crash cart” that is stocked with all of the medications that are needed to treat a patient during a cardiorespiratory arrest. But carts are not immediately available everywhere in the hospital, for example, in the driveway in front of the entrance to the building. Panicked people don’t always know to take someone with an urgent medical condition to the hospital’s emergency room, they may not even know where the emergency room is – they just drive up to the front of the hospital and yell for help. When someone has an opioid overdose, intranasal naloxone (Narcan) is life-saving and even a couple minutes delay can mean the difference between life and death. Narcan is the drug overdose equivalent of bystander CPR for cardiac arrests. So, it behooves us to have it immediately available to hospital first responders to “code blues”.

Ohio started Project DAWN as a way of getting naloxone into people who overdose on opioids as quickly as possible. In 2016, the Columbus EMS personnel administered intranasal naloxone 2,300 times. In a 6-month pilot program, 125 Columbus police officers were given intranasal naloxone to carry – they administered it 58 times and all but one of the people survived. So if city police carry intranasal Narcan, should hospital security staff carry it also?

Our hospital is currently debating this. On the one hand, a security officer responds to every code blue and they also patrol the hospital grounds, including the parking lot, where a lot of drug overdoses arrive. On the other hand, there are a lot of security officers that would need to be trained and it would require us to buy a lot of doses of intranasal naloxone to supply them all. The other option would be our nursing supervisors – there is only one of them on duty at any given time and they also respond to all code blue calls. Because of their nursing background, they would require a lot less training in administration and would likely be a lot more comfortable administering the medication. With fewer of them, it wold require a lot fewer doses to supply them. I’m not sure what the final decision will be but it is clear that we need to make intranasal naloxone more widely available, even in the hospital.

In cities, there has to be a fire hydrant every 400 feet. There has to be a smoke detector in every bedroom of your house. There should be one fire extinguisher for every 200 square feet of building space. We go to great efforts to prevent people from dying of fires. Last year, 104 Ohioans died from fire. But last year, 4,149 Ohioans died of unintentional drug overdose. That means that in Ohio, you are 40 times more likely to die of an accidental drug overdose than from a fire. How many lives could we save if intranasal Narcan was as easily available as fire hydrants and fire extinguishers?

It is time to look at intranasal Narcan the way we look at automated electronic defibrillators (AEDs). Get them to where the people are who need them.