Identification of cancers in early stages when they are surgically curable has resulted in an overall reduction in cancer death rates in the past 20 years. Where cancer screening has been most effective is in colorectal cancer, cervical cancer, and breast cancer. Prostate cancer screening has been much more controversial with several recent studies suggesting that screening with serum PSA levels may not have much impact on overall survival. The most recent study showing no benefit by PSA screening was published in this month’s JAMA. This was a powerfully large study that involved 415,357 men age 50 – 69 years old followed for 10 years. The overall conclusion of the study was:

“…there was no significant difference in prostate cancer mortality after a median follow-up of 10 years but the detection of low-risk prostate cancer cases increased. The findings do not support single PSA testing for population-based screening.”

In other words, they found more cancers but finding them did not result in men living any longer. The idea is that by screening, you find very low grade cancers that would never pose a risk to a man with a normal life expectancy. And the implication is that by screening, we’d do a lot of unnecessary prostatectomies on men who really don’t need them. So, does this mean that we should stop screening men for prostate cancer? Well, we shouldn’t condemn the PSA too fast.

First, the study took place in England and Wales – notable because one of the major risk factors for prostate cancer is being African American (at least in the United States). In the U.S., 12.3% of the population is black whereas in the U.K., only 3.0% of the population is black. Therefore a significant at-risk population was underrepresented in the study. It is likely that different screening strategies should be employed for higher risk men, such as those who are black and those with a family history of prostate cancer. This would be analogous to doing mammography at an earlier age for women with BRCA genes and strong family history of breast cancer or doing more frequent colonoscopies in people with familial polyposis.

Second, the study protocol was a single PSA test with prostate biopsy for those men with a PSA > 3.0 ng/ml. I would question the value of a single PSA test, especially if it is only minimally elevated, for example 3.0 – 5.0 ng/ml. Instead, it may be more predictive to look at the PSA trajectory over time with men at the highest risk of more aggressive prostate cancer having the steepest trajectory in PSA levels. 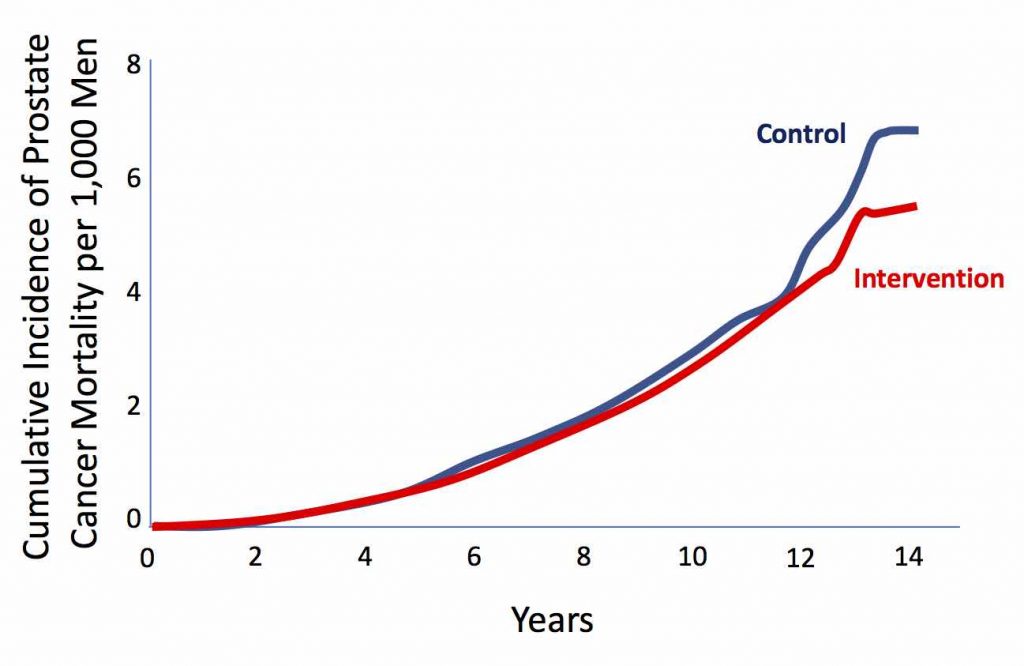 Third, if you look carefully at the data from the recent study, although there was no overall significant difference in the mortality from prostate cancer between the men who got usual care (control) versus those that got the single screening PSA (intervention), by 14 years, the curves were starting to separate and I question whether there would be a significant difference in mortality if the groups had been followed for 18 or 20 years. The implication of this is that for men with a long life expectancy, PSA screening may be appropriate.

So, what is my personal take on whether we should be doing PSA screening for prostate cancer? I believe that we should do it but that screening should be personalized based on life expectancy and risk factors. Here are my thoughts on it:

I’m not ready to give up on recommending prostate cancer screening on the basis of the most recent study. But I am ready to commit to screening more strategically and making sure that my patients are better informed about the test.