LPNs (licensed practical nurses) and RNs (registered nurses) have very different training and scopes of practice.  Understanding these differences will help you decide which one is best for specific outpatient office practices.

It takes more training to become an RN than an LPN. Although the duration of  LPN programs can vary, one year is about average. LPNs typically train at community colleges or technical schools. On the other hand, to become an RN, the minimum training (associate degree) takes two years and most RNs will complete a bachelor of science in nursing degree (BSN) that takes about four years. Associate degree programs are generally found at community colleges and bachelor degrees are generally found at universities or 4-year colleges.

Many hospitals preferentially hire RNs who have a bachelor degree due to their more extensive education. Also, hospitals seeking “nursing magnet status” are required to have mostly RNs with bachelor degrees as opposed to those with associate degrees. In the outpatient physician office setting, the differences between RNs with associate degrees versus those with BSN degrees are less important since their scope of practice is similar and nursing magnet status is not relevant.

Differences In Scope Of Practice

Each state regulates what LPNs and RNs can and cannot do. In general, RNs are permitted to function independently and perform a higher level of assessment than LPNs. RNs are considered to be able to practice nursing independently whereas LPNs are considered to have a “dependent” practice, meaning that the LPN must work under the supervision of a physician, an RN, a podiatrist, a physician assistant, a dentist, etc. In most states, RNs, but not LPNs, can administer intravenous medications. For these reasons, hospitals have moved away from employing LPNs and now primarily employ RNs for inpatient care. However, in an outpatient office practice, there are more similarities rather than differences in the LPN and RN scopes of practice.

Either an LPN or an RN can perform the majority of nursing tasks in the outpatient office practice. For example, checking vital signs, teaching patients, taking phone messages, taking basic history information for the electronic medical record, scheduling tests, and administering vaccinations. Similarly, both types of nurses can perform common office procedures such as EKGs, spirometry, and influenza tests.

There are situations when an RN is preferable. For example, if intravenous medications are given in the physician office and RN is required. Also, when a higher level of assessment is required, such as answering sick calls to independently make recommendations to patients and RN is needed.

Where Do RNs And LPNs Work?

According to the U.S. Bureau of Labor Statistics, there were 721,700 LPNs working in 2019 (the most recent year data is available). The following is a breakdown of where they work:

In 2019, there were 3.1 million RNs working, four times the number of LPNs. The breakdown of RN job locations is:

In general, an RN will command a higher salary than an LPN due to the longer amount of training required and the greater scope of practice permitted by state nursing boards. According to the Bureau of Labor Statistics, the overall median annual income for an LPN in 2019 was $48,820 and the median annual income for an RN was $75,330. However, different locations of employment command different salaries. For example, hospital employment requires working weekends, nights, and holidays whereas physician offices are generally open only on during daytime on weekdays; thus nurses working in hospitals command higher salaries than those working in physician offices. 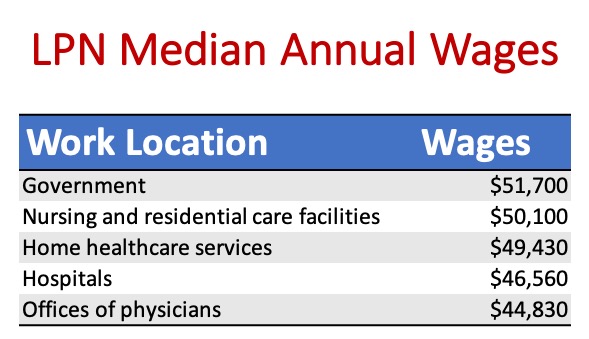 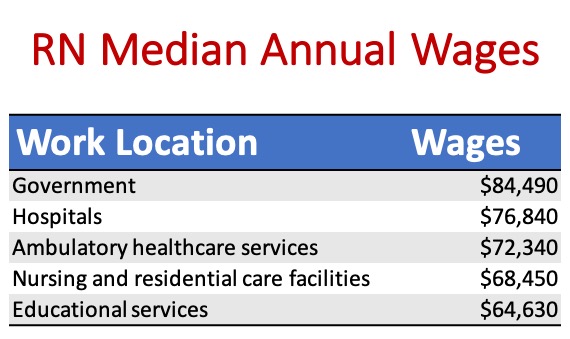 One of the central tenets of operational efficiency in healthcare is to allow employees to work at the top of their license. An implication of this is that you should not hire an RN to do an LPN’s job. When both salary and benefits are considered, an RN will cost $30,000 more per year; in other words, you can hire 3 LPNs for the cost of 2 RNs. Because of the lower cost of LPNs plus the fact that most nursing duties in the ambulatory office practice fall within the LPN scope of practice, LPNs are the right choice for most nursing positions in physician offices. Some physicians may not even need any RNs in the office. However, there are situations when an RN will be preferable to an LPN such as when intravenous medications are administered in the office and when the practice gets a lot of walk-in visits or ill calls from patients that require a higher degree of independent nursing assessment.

In multi-physician practices, some physicians will inevitably view having an RN (as opposed to an LPN) as a measure of prestige or of the physician’s self importance. I’ve often heard physicians say that they need to have an RN rooming their patients because: “…my patients are sicker”, “…I’m more senior”, or “…I see more patients”. However, vital signs taken by an RN are not any better than vital signs taken by an LPN. So, when those physicians are faced with taking a $30,000 reduction in salary in order to have an RN do the job of an LPN, they generally have second thoughts. A large multi-physician medical office will be most efficient with LPNs managing most of the day-to-day duties and then a smaller number of RNs for phone triaging, complex patient management, and supervisory roles.

RNs will continue to be the predominant type of nurses in our nation’s hospitals. In physician outpatient office practices, LPNs and RNs both have important roles. However, LPNs are considerably more cost-efficient for the majority of nursing roles in the office.