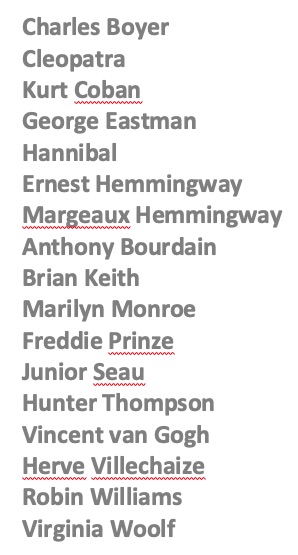 Suicide is the master thief. He steals from our family, from our friends, and from those that we admire. These are the faces of some of the lives that he has stolen. Although we have greater fear of his brother homicide, suicide takes more lives each year than homicide. Sometimes, suicide slips into our homes after we’ve feared him, after we thought we locked the doors and closed the windows to keep him out. Sometimes, he catches us off guard and we wake up in the morning and find that he’s stolen a life when we least expected it. He doesn’t discriminate by age or race or gender. He’ll strike the rich and the poor, the famous and the unknown, the strong and the weak. He has preyed on men and women for as long as humans have walked on the earth. Many people turn to him hoping that he can relieve their pain but all together too often, the pain goes on just as intensely in those who are left behind. Sometimes he whispers his intentions in our ears before he comes but all too often, we just don’t hear him or we don’t understand what he is saying to us. As physicians, whether we are primary care providers, emergency room physicians, specialists, or hospitalists, we are often in the best position to hear those whispers and to identify patients who are suicidal early on, when intervention can save lives. 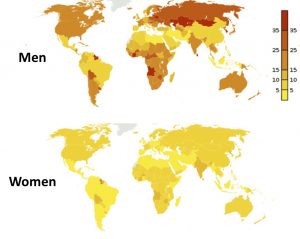 Suicide is an enormous public health problem in the United States. It is the 10th leading cause of death in our country and the 2nd leading cause of death in persons age 10 – 34 years old. One American dies by suicide every 11 minutes. But this is not just a U.S. problem. In fact, the United States has just the 37th highest suicide rate in the world, led by Greenland which has the highest suicide rate at 83 per 100,000 population. 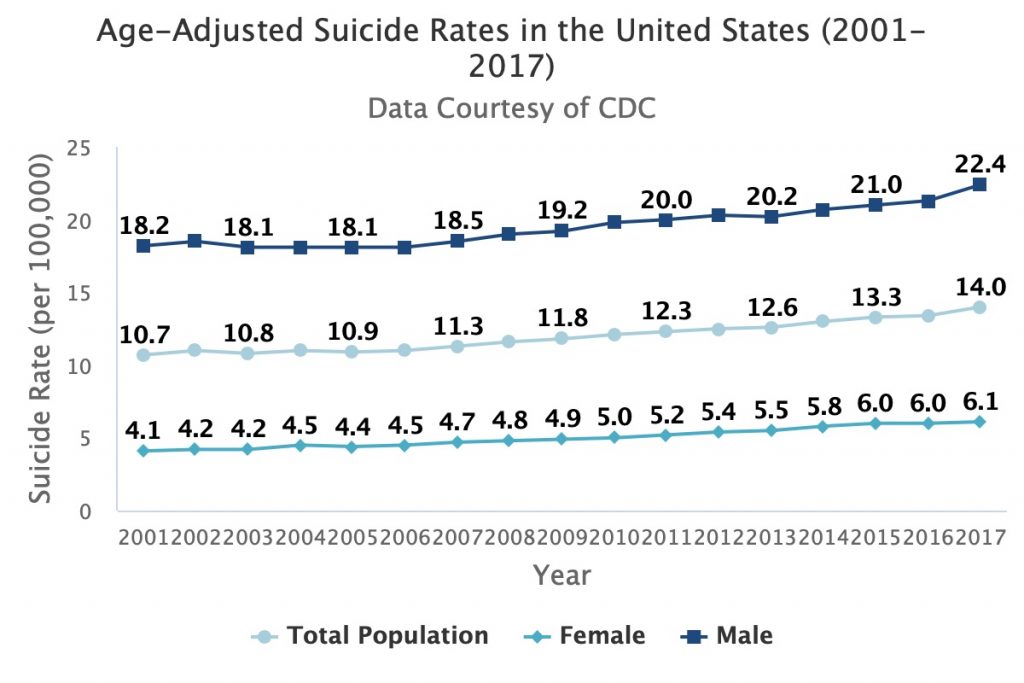 There is a gender paradox to suicide: in the United States, women are 3 times more likely to attempt suicide than men but men are 3.5 times more likely to die by suicide than women. Part of the reason is in the gender differences in method of suicide. Men most commonly use guns and women most commonly use poisoning – firearms are considerably more effective as a means of death than poisoning. Overall, guns account for 50% of all U.S. suicides followed by poisoning at 14%, suffocation at 28%, and miscellaneous other methods at 8%. 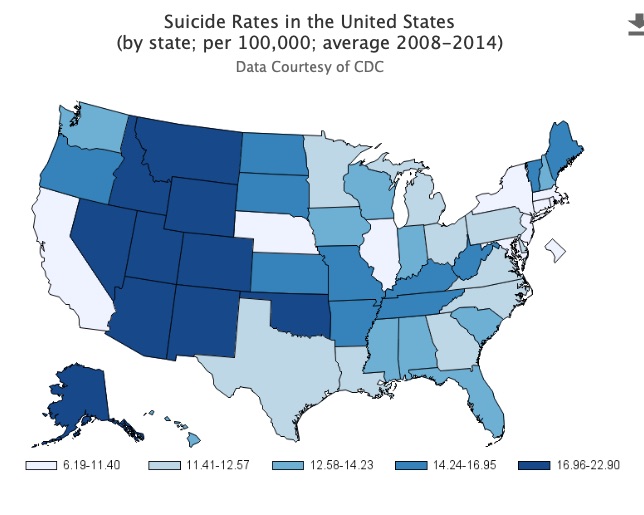 45% of people who die by suicide saw their primary care physician within a month prior to their death. So what can we do in our office practices and our emergency rooms to identify those patients at risk for suicide and get them the psychiatric care that can save their lives? Fortunately, there are easy assessment tools that we can use that will help identify at-risk patients. There are many suicide screening questionnaires available – two that are commonly used in healthcare settings are the ED-SAFE and the Columbia screening tools. 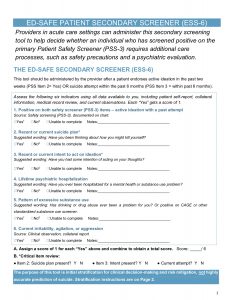 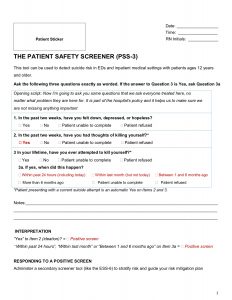 The ED-SAFE tool (click on the attached images to enlarge) was originated as a National Institutes of Mental Health study performed at 8 emergency departments in the United States to determine the impact of suicide screening in emergency departments. It is available free of charge at the Suicide Prevention Resource Center website. It consists of two parts. 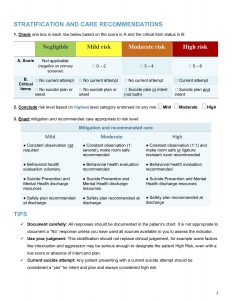 The first part is the Patient Safety Screener (PSS-3) which consists of 3 questions and can be administer by nurses doing triage in the emergency department. Patients screening positive on the PSS-3 are then asked questions from the second part which is the ED-SAFE Patient Secondary Screener (ESS-3) which consists of 6 additional questions. The responses to the ESS-3 will stratify patients into (1) negligible risk, (2) low risk, (3) moderate risk, or (4) high risk. The risk categories then provide mitigation and recommended care for patients such as 1:1 observation and use of ligature-resistant rooms.

The Columbia Suicide Severity Rating Scale (click on the attached image to enlarge) was created by Columbia University, the University of Philadelphia, and the University of Pittsburgh with sponsorship by the National Institutes of Mental Health. It is available on-line free of charge at the CSSRS website. 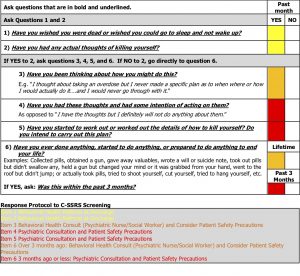 It was designed to identify those patients at risk of suicide in general settings and healthcare setting and has been endorsed by the CDC, FDA, NIH, Department of Defense, and other organizations. Based on patients responses to 6 different questions, there are recommendations for either (1) behavioral health referral at discharge, (2) behavioral health consult and consider patient safety precautions, or (3) psychiatric consultation and patient safety precautions.

These screening tools are the first step but frequently, a more detailed suicide assessment is necessary and this may require a more nuanced history from the patient. Major risk factors for completed suicide include:

There are other risk factors to consider as well:

But in addition to risks, there are also protective factors that can sometimes offset suicide risks for individual patients. These protective factors can often make the difference between a patient being at moderate risk or high risk of suicide:

Suicide assessment is not just the purview of the psychiatrist. It is up to all of us: emergency medicine physicians, primary care physicians, hospitalists, and specialists. In an era when a hip replacement surgery costs $32,000 and immunotherapy for lung cancer with the drug nivolumab costs $150,000/year, we could save thousands of lives at the cost of just asking a few questions.