Each year, Medicare analyzes the readmission rate for every hospital in the United States and then imposes financial penalties on those hospitals determined to have excessively high readmission rates. And every year, most U.S. hospitals get penalized. This year is no exception – 83% of all hospitals face penalties.

The hospital readmission reduction program was created as a part of the Affordable Care Act as a way to improve quality of care and reduce overall Medicare costs. Readmissions are defined as a patient being readmitted to any hospital and for any reason within 30 days of discharge from the hospital being analyzed. The program began in 2013 by looking at readmissions for just 3 conditions: myocardial infarction, heart failure, and pneumonia. In 2015, the program expanded to 5 conditions by adding readmissions for chronic obstructive pulmonary disease and knee & hip replacement surgery. In 2017, the program further expanded to 6 conditions by adding coronary artery bypass graft surgery. Each year, Medicare calculates the penalties based on the previous 3 years’ readmission data and then hospitals are penalized up to 3% of their total Medicare payments the following year.

The program has been controversial since inception with concerns that it preferentially penalized hospitals that care for sicker patients as well as for lower-income patients and underinsured patients who often lack the resources to get outpatient medical care that can keep them out of the hospital. Medicare responded by making 2 adjustments to the penalty based on a given hospital’s patient demographics: 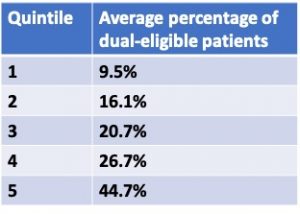 Characteristics of the 2020 readmission penalties

Last month, Medicare released the penalties for next year. These are based on 2015 – 2018 readmission data. 2,142 hospitals were exempt (childrens hospitals, veterans hospitals, Maryland hospitals, critical access hospitals, psychiatric hospitals, and hospitals with too few admissions for statistical significance). Overall, out of 3,129 U.S. hospitals included in the penalty program, 2,583 hospitals (83%)  received penalties totaling $563 million. The average penalty was 0.71% of total Medicare payments. 56 hospitals received the maximum (3%) penalty. 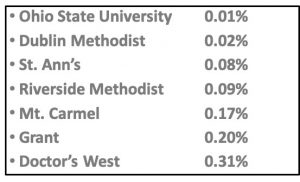 In Ohio, 90% of hospitals were penalized. Our medical center, the OSU Wexner Medical Center, received the lowest possible penalty, 0.01% which amounts to $14,000 for next year (last year, our penalty was 0.06%). In fact, all seven of the hospitals in Central Ohio fared very well for next year’s penalties with all of them coming in at less than half of the average U.S. hospital penalty.

In a previous post, I commented on the unintended consequence of the Medicare hospital readmissions reduction program, specifically that the program is associated with an increase in outpatient mortality. Since hospitals are paid by the DRG (in other words, by the diagnosis), hospitals are financially incentivized to discharge patients as quickly as possible in order to reduce their expenses. The Medicare hospital readmission reduction program was designed to offset that financial incentive by penalizing hospitals that discharge patients prematurely. Overall, the current readmission penalty program appears to be more fair to hospitals that care for socioeconomically disadvantaged patients. However, the danger remains that by creating a barrier for hospitals to readmit patients who truly need to be readmitted, outpatient mortality can increase.