Dollar cost averaging is an investment strategy where a fixed amount of money is invested on a regular basis, for example, monthly. There are several advantages to the investor to utilize dollar cost averaging. These same advantages apply to converting money in a traditional IRA into a Roth IRA. However, the conversion advantages of this strategy is to minimize income tax incurred from the conversion and thus maximize long-term investment returns.

What is a Roth IRA conversion?

There are essentially two types of IRAs: traditional IRAs and Roth IRAs. The rules about who can contribute to them and how they are taxed are a bit complicated. Both types of IRAs are subject to federal and state income tax but the differences are in when you pay those taxes: when you put the money in (during your working years) or when you take the money out (during retirement years).

When is the best time to do a Roth IRA conversion?

There are two situations when it is advantageous to do a traditional to Roth IRA conversion. The first is when your current income tax rate is lower than your anticipated income tax rate in retirement. For most people, this is early in their career, when their annual income is lower than it will be later in their career. However, if a person is out of work for a period of time, then their annual income can fall that year, making a Roth IRA conversion worthwhile. Another situation when your income tax is lower is when Congress lowers income tax rates. It is impossible to predict what future income tax rates will be in 5, 10, or 25 years. However, the tax cuts passed in 2017 have given us some of the lowest federal income taxes in memory and it is doubtful that they can go much lower in the future without severe cuts in government programs.

The second situation when it is advantageous to do a traditional to Roth IRA conversion is when there is a significant fall in the stock market.  When the value of a traditional IRA falls, then you will pay less income tax on the conversion. Ideally, you would wait for the market to drop and then convert investments in your traditional IRA into similar investments in your Roth IRA. When the market eventually recovers, you will have paid less in taxes than if you had waited and taken the money out of the traditional IRA in retirement. Ideally, you would wait until the market is at its lowest, then do the conversion. The problem with this is that no-one has a crystal ball to see into the future to know when the market has bottomed out. However, it is clear that 2022 was a terrible year for both U.S. stocks (down 19% over the past 12 months) and U.S. bonds (down 13% over the past 12 months).

Eventually, the stock and bond markets will recover and the prices for stock and bond mutual funds will increase. It is possible that the markets have already reached a bottom and the only way that they will go is back up. But it is also possible that stocks and bonds will continue to fall in value in 2023. That is the thing about predicting future stock and bond values – you just don’t know until you know and you don’t know until it has already happened. In other words, no one can predict future market values in the short-term. However, we can predict that future markets will be higher in the long-term.

So, 2023 would seem to be a good year to do a traditional IRA to Roth IRA conversion. The stock and bond market has lost a lot of value and we are currently living in a time of historically low income taxes (the 2017 income tax cuts will expire in 2025). But exactly when in 2023 should you do the conversion? This is where the concept of “reverse dollar cost averaging” comes into play.

In dollar cost averaging, a person invests a set amount at regular intervals throughout the year, typically monthly. By doing so, the person buys a lot of shares of of a mutual fund when they are cheap and buys fewer shares when they are expensive. This is a great strategy to ensure that you stick to a retirement savings plan. It also keeps you from trying to “time the market” (no one can accurately predict the future market so trying to time the market is generally unsuccessful). The “average” in dollar cost averaging refers to the result that by buying a few shares each month, then after 12 months, you will have a lot of shares with an average purchase price over the entire year. If you put a certain an amount of your paycheck into your 401k, 403b, or 457 each month, then you are already doing dollar cost averaging.

To see how dollar cost averaging works, let’s take the example of an investor who had $12,000 to invest on January 1, 2022. In the first scenario, the investor thought that the stock market was only going to go up in 2022 and invested the entire amount on January 1st. In the second scenario, the investor invested $1,000 every month for the full year. As it turned out, 2022 was a terrible year for stocks, dropping 19% for the year. The graph below shows the 2022 performance of the Russell 3000 Index, which is a benchmark for the total U.S. stock market. 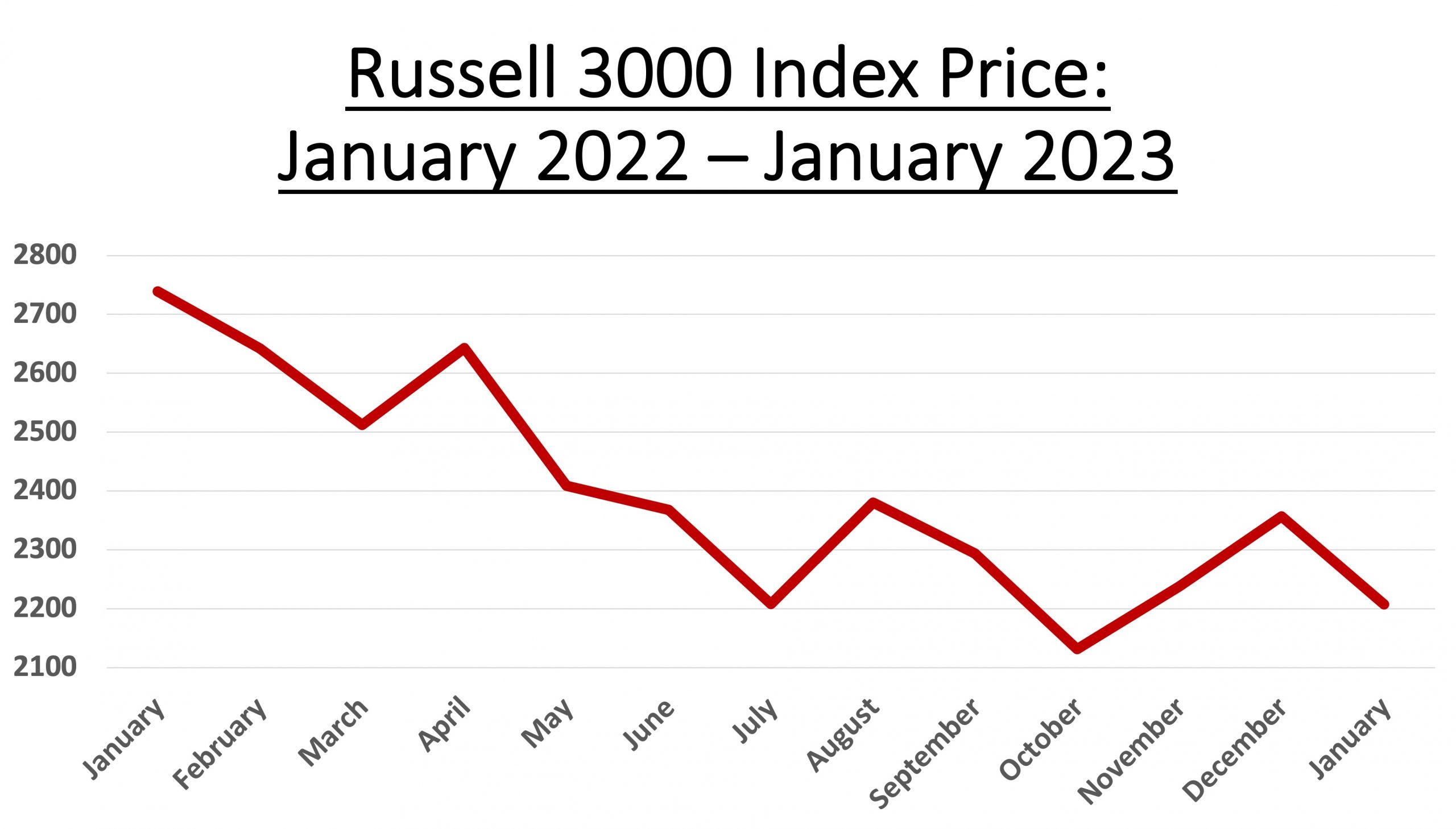 When it comes to maximizing investment returns, the old adage is “buy low and sell high”. But just the reverse is true for Roth conversions when long-term returns can be maximized by converting when the price is low. In essence, in a Roth conversion, you are selling an investment to yourself so that you are selling your traditional IRA low but also buying your Roth IRA low. When you eventually sell your Roth IRA tax-free in retirement, you will come out ahead.

In summary, it is looking like 2023 will be a good year for many people to do a traditional IRA to Roth IRA conversion. But resist the temptation to do one big conversion all at once. Instead, do 12 smaller conversions every month or 6 conversions every two months. When you are retired, you will be happy that you did.