Patients who get transferred to the ICU often have transfers notes saying to the effect “The patient’s condition suddenly worsened.” In reality, the patient’s condition didn’t suddenly worsen, it is just that we suddenly noticed. In its extreme, that worsening results in a cardiopulmonary arrest. It goes by different names in different hospitals. Sometimes it is called a “Condition A”, sometimes a “Code-2” or an overhead page to “Dr. Quick” but most often it is a “Code Blue”.

Here are some numbers about in-hospital cardiopulmonary arrests. According to the American Heart Association, there are about 209,000 in-hospital arrests per year. In comparison, there are about 350,000 out-of-hospital arrests per year. Most in-hospital arrests (61%) occur in intensive care units. According to a 2012 study, the reasons for the arrest is most commonly systole or pulseless electrical activity (PEA) which together account for 82% of cardiac arrests with ventricular fibrillation or ventricular tachycardia accounting for 18%. For hospitalized patients, the most common underlying cause of a cardiopulmonary arrest is pulmonary rather than cardiac. For those that are cardiac in origin, a critical determinant of survival is the time to first defibrillation shock if the patient has ventricular fibrillation – the goal is < 2 minutes, after 2 minutes, the chance of survival falls. We are getting better at in-hospital cardiopulmonary arrest management: in 2000, the survival was 15% but in 2015, survival was 30%. Interestingly, the survival is lower if the patient is tracheally intubated during the arrest – presumably because chest compressions are held during intubation and holding those chest compressions, even briefly, has a negative impact on survival.

All too often, there are unrecognized warning signs prior to a patient having a cardiopulmonary arrest, particularly when those arrests occur out of the intensive care unit. Our challenge is to identify those patients before they have an arrest so that medical interventions may prevent the arrest from happening. One way of detecting at-risk patients is the “MEWS” score, or Modified Early Warning System score. This score is derived from 5 variables:

For each of these variables, there are points assigned for if the variable is either too high or too low. 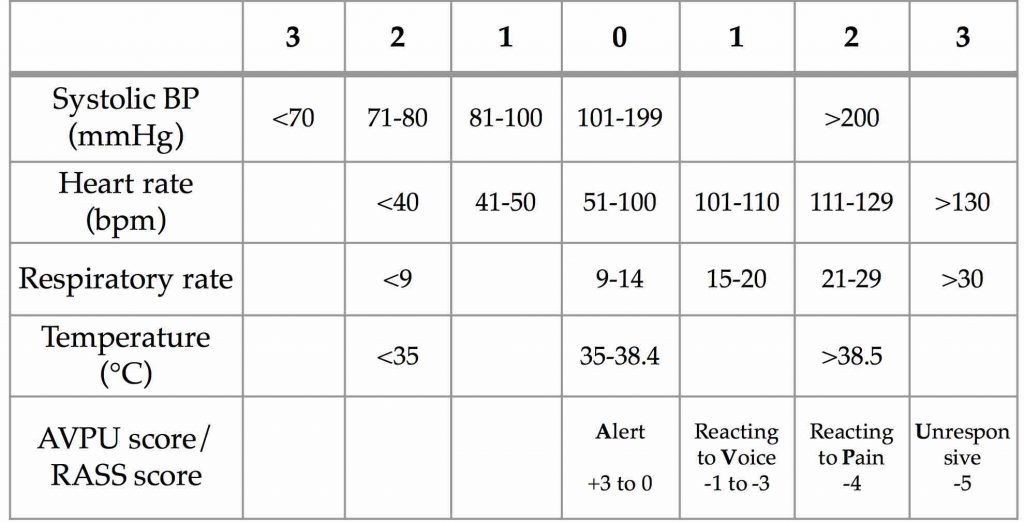 If the total MEWS score is 5 or greater, then there is a 5-fold risk of death and a 10-fold risk of being transferred to and intensive care unit. So, in our hospital, our electronic medical record can calculate the MEWS score, allowing doctors and nurses to identify those patients who are clinically deteriorating before they deteriorate to the point of a cardiopulmonary arrest. If they get to a MEWS of 4, the nurses will contact the covering physician and increase the frequency of clinical monitoring. If they get to a MEWS of 5, the nurses are asked to consider calling an ERT (Emergency Response Team) that results in an ICU nurse plus a respiratory therapist coming to the bedside to do an emergency assessment of that patient and report to the physician covering the ICU to decide if the patient requires transfer to the ICU or some other intervention.

So, what can we do to better position our hospitals to have improved outcomes of cardiopulmonary  arrests?

In the future, one measure of a hospital’s success at early identification of patients who are deteriorating is the percentage of cardiopulmonary arrests that occur in the ICU versus in a regular nursing unit. Ideally, most arrests (particularly non-ventricular tachycardia/fibrillation) should occur in the ICU.