Prior to the 1960’s, medical records were largely illegible, unorganized, and non-uniform. It was difficult for a doctor to keep track of his/her own patient’s histories and nearly impossible for a doctor to tell what was going on with a patient by reading another doctor’s notes. Enter Lawrence Weed, MD, a Professor of Medicine at the University of Vermont who invented the S.O.A.P note and taught generations of medical students to organize their hospital notes into the 4 sections of Subjective, Objective, Assessment, and Plan. He was also the father and champion of the  Problem-Based Medical Record, a way of organizing and filtering the various signs, symptoms, and diagnoses that a patient has in order to coordinate the diagnostic effort and to provide optimal longitudinal care of that patient.

And so, the problem list because a necessary part of every electronic medical record program in the country. On the surface, this sounds like a great idea – an easy way for multiple physicians using the same patient’s chart to quickly and easily see what is going on with that patient. However, the problem list rapidly morphed into a monstrous of list of often redundant words that became unusable for their originally intended purpose. So what happened to the innocent problem list? 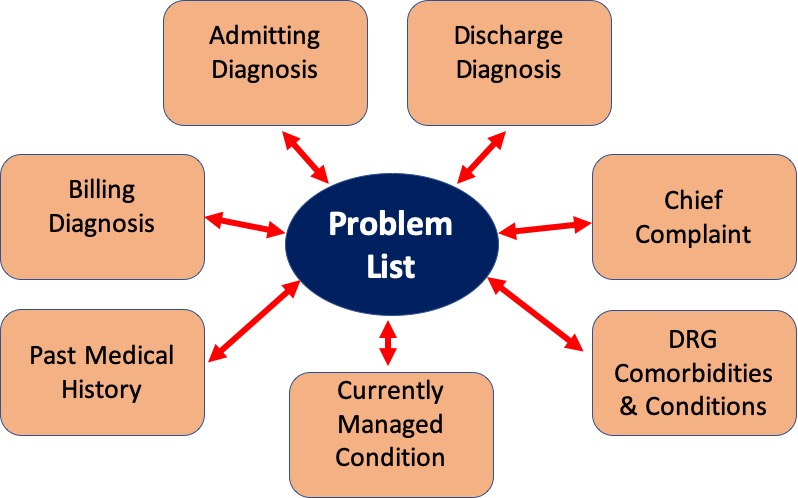 What Is A Problem, Anyway?

Each physician who sees a patient might use a different word to describe the same thing and this led to multiple duplicate symptoms on patient problem lists. For example, if a patient with breathlessness gets admitted to the hospital, the emergency room physician might add add the ICD-10 code “R06.00: Dyspnea“, the hospitalist might use “R06.02: Shortness of breath“, and the cardiologist might use “R06.09: Dyspnea on exertion“. By the end of the day, the patient’s problem list will include all three symptoms: dyspnea, shortness of breath, and dyspnea on exertion. 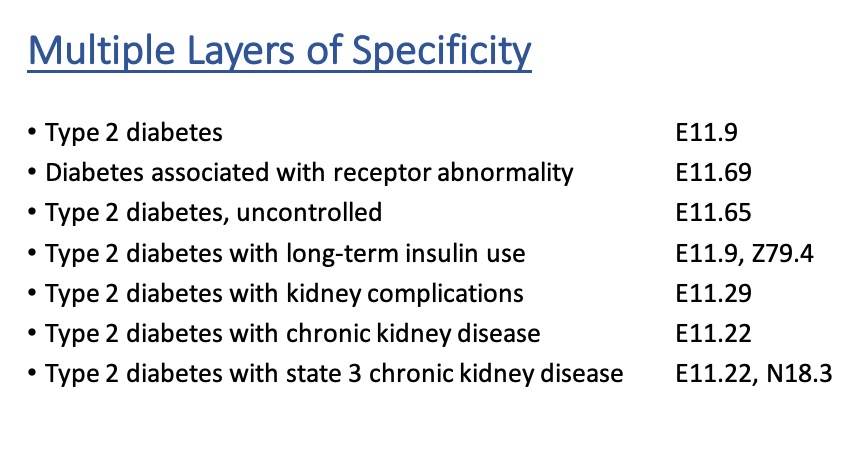 Similar to duplicate problems, many diseases can have many different ICD-10 codes for different degrees of specificity of that particular problem. And so “type 2 diabetes” can have a general code and also have many different subcodes, each of which gets its own place on the problem list. For the patient with diabetes who is seeing a family physician, a nephrologist, a cardiologist, an ophthalmologist, and a vascular surgeon, there can be 15-20 different diabetes-related problems on the problem list.

Whose Problem Is It?

Most would agree that the primary care physician should be permitted to add problems to the problem list. But what about the specialist, the emergency room physician, or the hospitalist? Should advanced practice providers such as nurse practitioners, physician assistants, nurse anesthetists, or midwives be allowed to edit the problem list? What about nurses, pharmacists, psychologists, and dietitians? There is no universal agreement about who the stewards of the problem list should be. 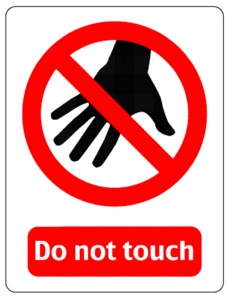 Many physicians are very possessive about their additions to the problem list and can get angry if another physician deletes one of their problems without talking to them. So, the patient who was rude to the office staff at the surgeon’s office might have gotten Negative attitude (F60.2) added to the problem list; when the same patient was a delight to the staff in the endocrinologist’s office, the endocrinologist might have deleted F60.2 from the problem list and then the surgeon later gets mad because he wanted that reminder to the staff that the patient was a handful during the last office visit.

In the spirit of Dr. Weed, some physicians will organize their progress note in the electronic medical record by importing the patient’s entire problem list into their daily office note. This can result in progress notes that are the length of a small novel making the note unnavigable to any reader and making it more difficult for other physicians to figure out what the author of the note was actually trying to say. 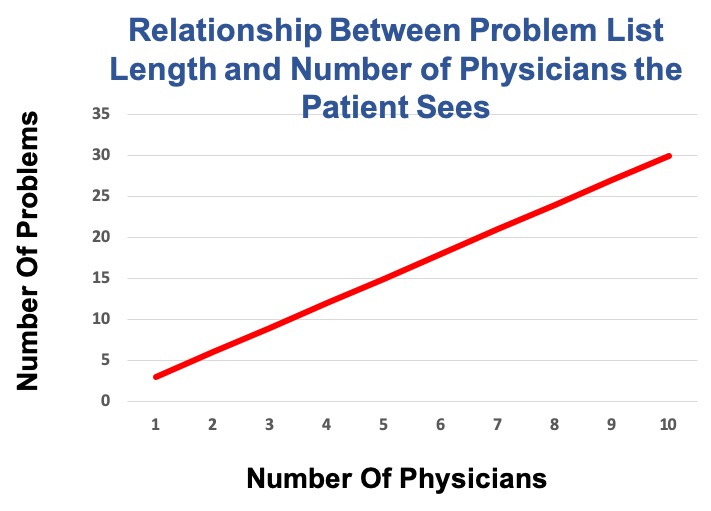 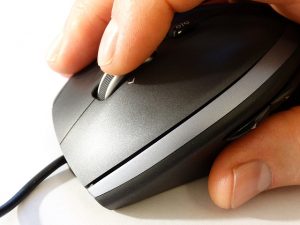 The currency of work effort in ambulatory medicine is the number of mouse clicks necessary to perform any given task. A typical office visit lasts about 15 minutes and there is a lot of things that have to be done in those 15 minutes. Reviewing and editing the problem list costs time and mouse clicks and usually falls down to the bottom of the priority list of things to accomplish during those 15 minutes. Spending an extra 30 seconds per patient to truly review and update the problem list means that over the course of the day, that doctor will see one less patient than he/she otherwise would have seen. One solution that has been suggested is to partner with the patient so that the patient reviews the problem list to help identify resolved or erroneous problems. However, trying to explain what “suprascapular entrapment neuropathy of left side” means to the patient with a sore shoulder can often add 2 minutes to that office encounter.

Some tests and vaccinations cannot be ordered unless they are associated with a “need for” diagnosis. For example, if you are going to order a flu shot, you have to use the diagnosis of “Need for influenza vaccine” (Z23). Some insurance companies will not pay for a bone density study unless the order is accompanied by the diagnosis of “At risk for osteoporosis” (Z91.89). If you want to see if a patient could have lead poisoning, you need to include “Need for lead screening” (Z13.88). These diagnosis codes often find their way into the problem list and do not add anything to the long-term management of that patient.

Similar to the “need for…” diagnoses, many tests cannot be ordered unless the physician uses a specific ICD-10 code or one of a group of codes. These are so-called “allowable codes”. Many electronic medical records will present an alert box if a non-allowable diagnosis code is associated with an ordered test, such as a glucose level or a cardiac echo. The physician will then either keep adding diagnoses to the diagnosis list until she/he comes up with a diagnosis code that the insurance will accept or they will scroll through the list of allowable diagnoses in the alert box and pick a diagnosis code that is covered, whether or not it perfectly matches the real indication for that test. These diagnoses are necessary for the physician to order the test but may be irrelevant to the longterm management of that patient; nevertheless, the codes often end up on the problem list permanently. Physicians hate the alert boxes – they cost mouse clicks and time. Consequently, physicians, like Pavlov’s dogs, undergo operant conditioning and to avoid those alert boxes, they find a diagnosis that insurance companies accept for any given test and always use that diagnosis whenever they order that test. Thus, there are legions of physicians who always use “Other forms of dyspnea” (R06.09) for every cardiac echo that they order because they know that diagnosis works.