Most Americans have had a sense that the COVID-19 pandemic has been politicized. By analyzing publicly available datasets, it is clear that there are striking differences between Republicans and Democrats with respect to COVID deaths, COVID infections, and COVID vaccination rates.

If you have not seen the graph created on the Infection Prevention, Emergency Management, & Safety blog, please click here to view it. This graph shows that there is a dramatic relationship between U.S. counties voting Republican versus Democrat in the 2020 presidential election and the rate of death from COVID infection in those counties. This graph was the inspiration for the following analysis.

Data regarding vaccination rates and death rates was obtained from the COVID-19 data sets available on the Centers for Disease Control’s COVID Data Tracker website. Data regarding COVID seroprevalence rates was obtained from the Nationwide Commercial Laboratory Antibody Surveillance Survey website. Results of the 2020 presidential election are available at many sources, including the Federal Elections Commission website. Data from all 50 states plus Washington D.C. were included (Puerto Ricans cannot vote in presidential elections). Statistical analysis was performed using 2-sample t-tests. For death rate analysis, data was obtained from three dates:

Republicans are dying of COVID at a higher rate than Democrats

Because the population size of each state is different, the total number of COVID deaths per state tells us very little. Of greater importance is the number of deaths per 100,000 people in each state. Since April 19, 2021 (when vaccines were available to everyone over age 16), states that voted Republican in the 2020 presidential election have had a higher death rate from COVID than states that voted Democrat (89 per 100,000 versus 53 per 100,000; p < 0.0001). 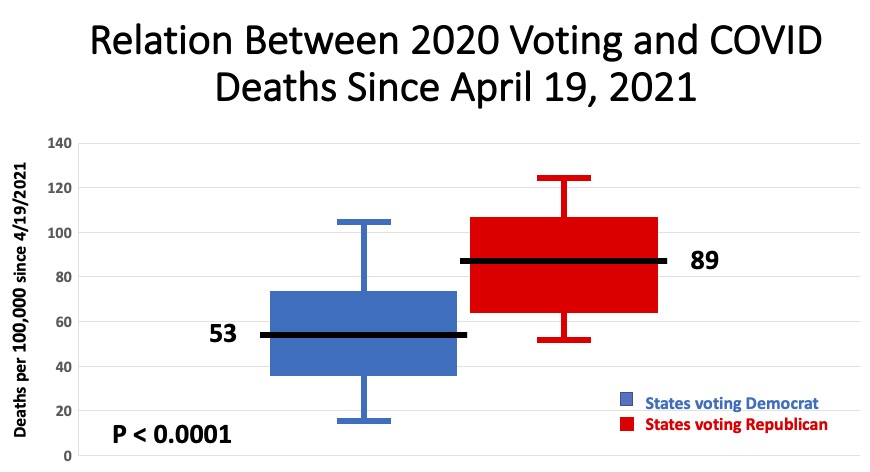 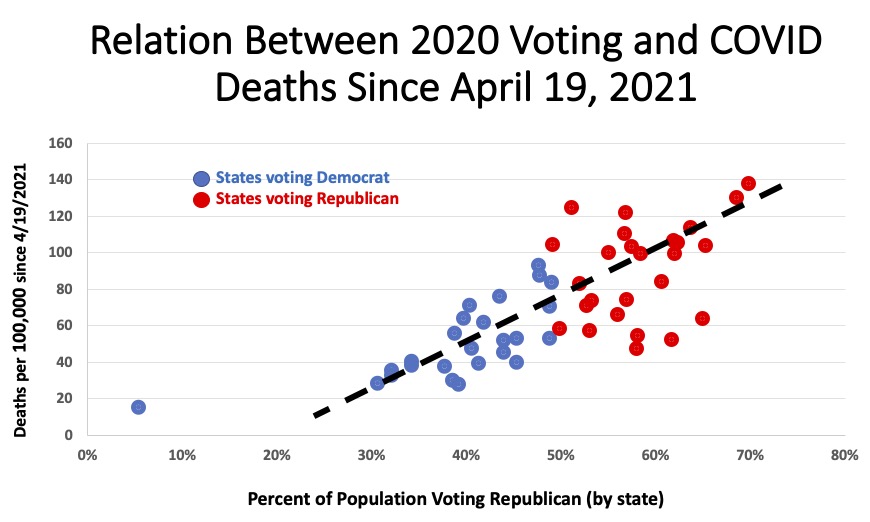 On December 15, 2020, COVID vaccines first became available to restricted populations. In most states, vaccines were initially limited to healthcare workers and high-risk nursing home residents. Assessing deaths since December 15, 2020, Republican states still have had a higher death rate than Democrat states (160 per 100,000 versus 111 per 100,000; P < 0.001) 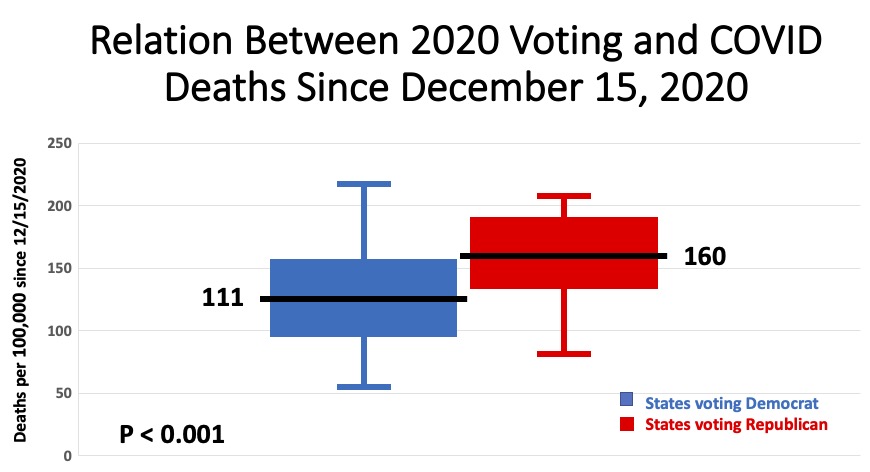 Once again, there is a direct correlation between the percentage of voters in each state voting Republican and the death rate from COVID since December 15, 2020: 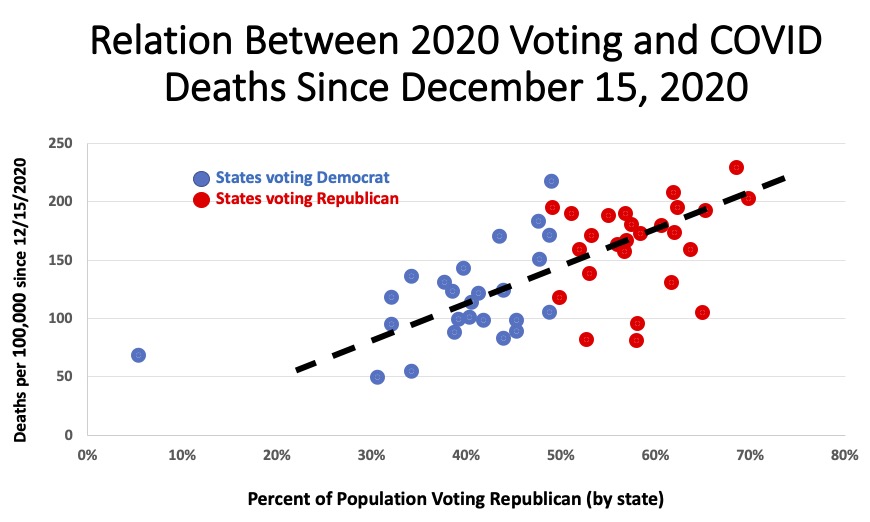 The first cases of COVID-19 in the United States occurred in January 2020. In the first months of the pandemic, there was slow adoption of social distancing and mask-wearing throughout the nation and as a consequence, the largest outbreak of infection initially occurred in New York City (New York voted Democrat in 2020). Despite this, Republican-voting states have had a significantly higher COVID death rate since the pandemic began than Democrat-voting states (252 per 100,000 versus 211 per 100,000; p = 0.019). However, the death rates are not as divergent as they have been since vaccines have been available. 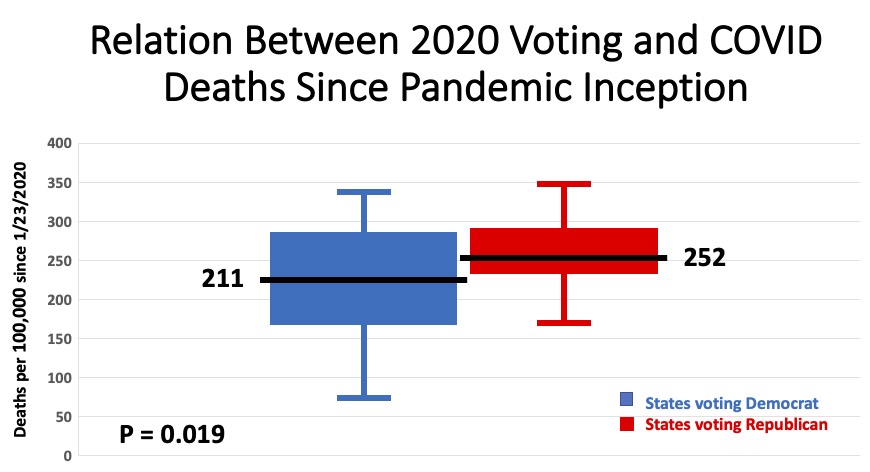 There has been a direct correlation between COVID death rates and the percent of each state voting Republican in 2020 since the beginning of the pandemic on January 23, 2020. However, the slope of the correlation is not as steep as it is since vaccines became available, as shown in the previous scatter graphs. 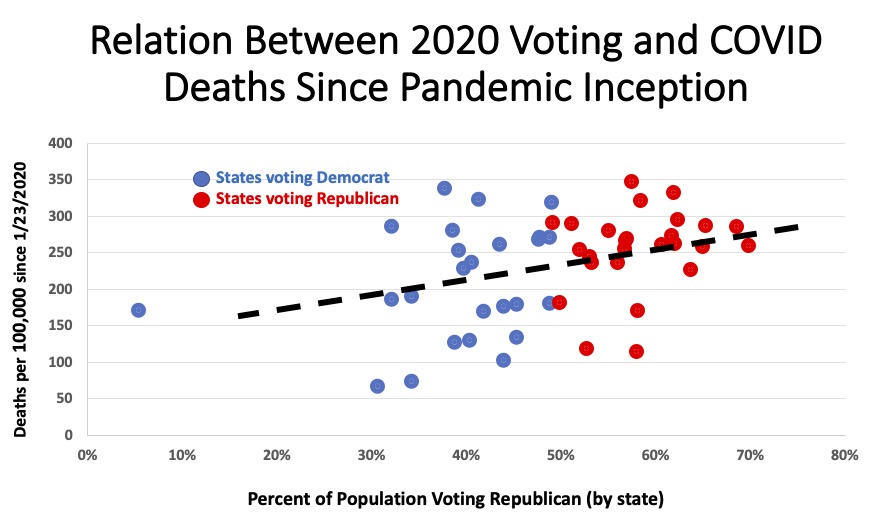 More Republicans have had COVID-19 infection than Democrats

There are 3 databases that track the number of Americans who have had COVID infection: (1) nasopharyngeal testing reported to the CDC, (2) blood donor surveillance testing, and (3) the Nationwide Commercial Laboratory Antibody Surveillance Survey. In a previous post, the advantages and disadvantages of each of these was discussed but overall, the infection rates determined by the Commercial Laboratory Survey are probably the most accurate. 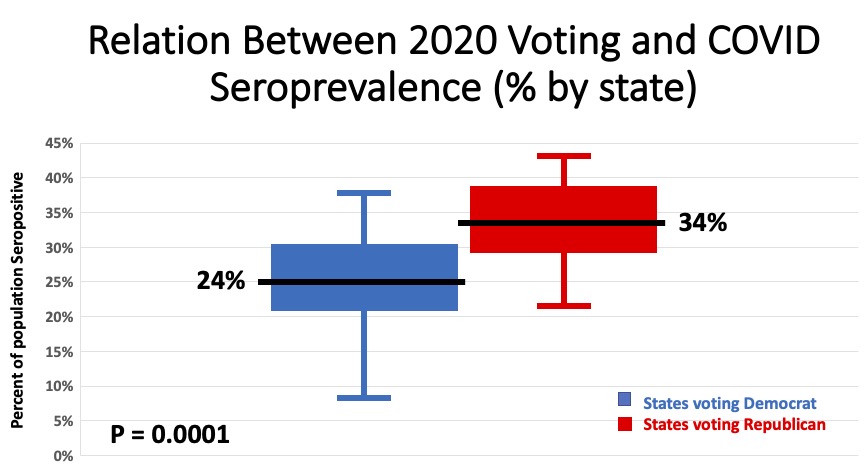 As with the death rate data, there is a direct correlation between the percent of voters voting Republican in each state and the percentage of people in each state that have had a COVID infection since the pandemic began: 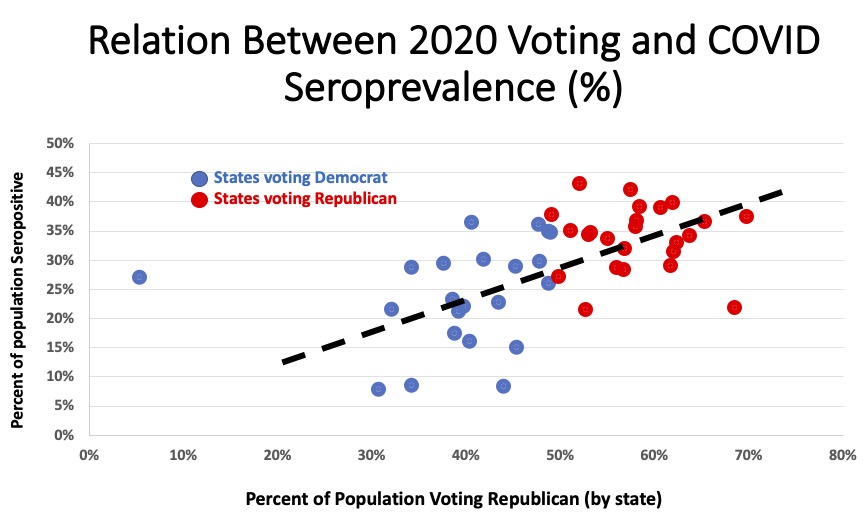 Republicans are less likely to be vaccinated than Democrats

Surveys, such as the Kaiser Family Foundation Vaccine Monitor, have indicated that Republicans are less likely to get vaccinated than Democrats. Although one’s political party is not asked about when getting vaccinated, by comparing state voting records with CDC vaccination data, Republicans do appear to be less vaccinated than Democrats. In states that voted Democrat in the 2020 presidential election, 78% of the population has received at least one dose of a COVID vaccine versus 63% of the population in states voting Republican (p < 0.0001). 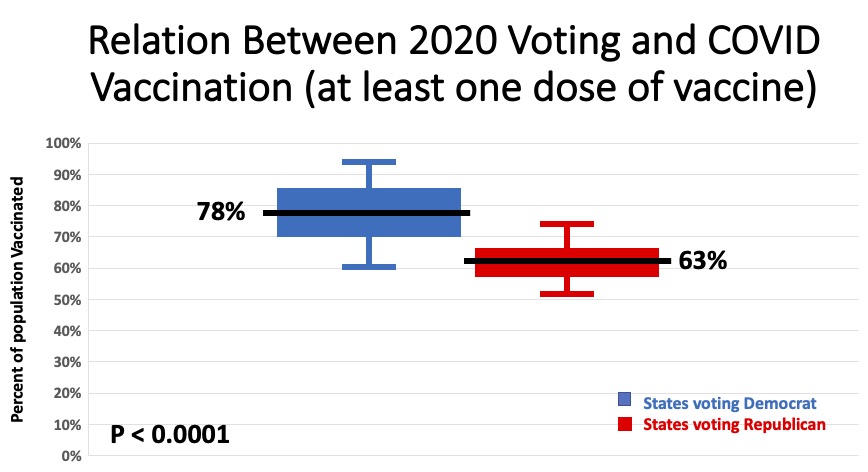 Similar to the other analyses, there is a direct correlation between the percentage of voters in each state that voted Republican and the likelihood of being vaccinated: 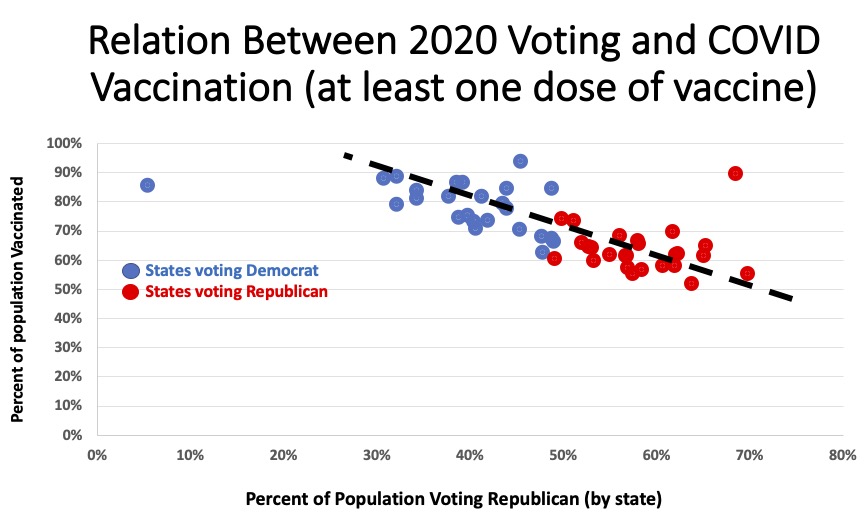 The implications are clear

COVID infection is expensive. At the least, it results in greater employee absences, resulting in significant cost to employers. For many people, infection requires hospitalization, resulting in expensive healthcare costs that are passed on to taxpayers (through Medicare and Medicaid) and American workers (through commercial insurance premiums). Prolongation of the pandemic results in supply chain disruptions that in turn lead to costly increases in inflation. By being less vaccinated and having more COVID infections, Republicans are costing the nation more than Democrats.

The tragedy of COVID is not the financial costs but the cost of human lives. Thus far, more than 800,000 Americans have died from COVID and the projections are for the United States to surpass 1 million deaths before next summer. The above analysis indicates that Republicans are dying at a much faster rate than Democrats. It is my sincere hope that the party leaders get the message that dead people cannot vote and as the pandemic continues, there will be fewer Republicans alive to vote in the 2024 election. With the 2020 presidential election decided by razor-thin margins of votes in Georgia, Arizona, and Wisconsin, it is clear that neither political party can afford to have a disproportionate number of its voters die. However, by politicizing vaccination, mask-wearing, and social distancing, Republican voters are disproportionately dying and the Republican party is thus giving up votes to the Democrats.

As a full disclaimer, I am politically independent and do not affiliate with either party. In the 2020 general elections, I financially supported 2 Democrats and 2 Republicans running for various state and national offices. In this war of the pandemic, the enemy is not Democrats or Republicans, it is the virus… and you cannot win a war unless you know who the enemy really is. It is time for all of us to put our political party preferences aside and fight the true enemy.