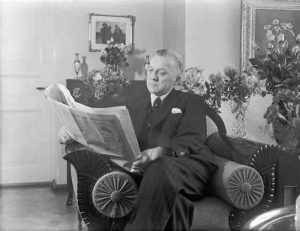 Last week, we filmed one of Ohio State’s MedNet-21 webcasts, this one on Environmental Emergencies. One of the topics was hypothermia and one of the presenters, Dr. Nick Kman from OSU, made the comment that “a hypothermic patient is not dead until they are warm and dead”. That reminded me of when I was taught that a patient is not dead until you read the sports page.

I was a 4th year medical student and was doing a rotation in general internal medicine with Dr. Bob Murnane who was a very highly esteemed internist in private practice in Columbus. He had an old-school medical practice: he had a solo practice, his office was across the street from the hospital, and he took care of all of his admitted patients on his own service in the hospital.

One morning, I arrived at his outpatient office. His nurse said Dr. Murnane was over at the hospital after getting stat-paged about one of his patients who had just taken a critical turn. He had told the nurse that we should get over to the patient’s room right away. The other medical student and I ran across the street, ran up the stairs and burst into the patient’s room, both of us out of breath.

We were expecting resuscitation efforts to be underway but when we opened the door, there was Dr. Murnane sitting in a chair in the patient’s room, calmly reading a newspaper. On the other side of the room, laying in bed, was the patient, an elderly lady with advanced dementia who had been admitted with pneumonia. And she looked, well… dead.

Without putting down the paper or looking up, Dr. Murnane said, “sit down boys, it’ll be a few minutes yet”. So we sat down and for about 5 minutes, there was not a sound in the room, except for Dr. Murnane turning the pages of the sports section of the morning newspaper. Finally, he put the paper down, walked over to the patient’s bed, checked her pulse, and said “Yep, she’s dead”.

He went on to say that he never pronounces a patient dead until he reads the sports page.

It turns out that a couple of decades earlier, he pronounced a patient dead who didn’t appear to be breathing and didn’t seem to have a pulse but after the patient had been taken to the morgue, he sat up, very much alive wanting to know why he wasn’t in his hospital room. So ever since, whenever a patient seemed to be dead, Dr. Murnane would check for a pulse and check for spontaneous breathing. Then he’d sit down and read the sports page and when he got done, if the patient still didn’t have a pulse or respirations, then he’d pronounce him dead.

Well, I thought that was just another idiosyncratic Murnane-ism until 4 years later when I was a pulmonary fellow in the MICU. We had a patient with severe COPD who had respiratory failure and was on a ventilator. He got progressively more bradycardia and hypotensive and the family decided against CPR. I was tied up doing a bedside procedure on another patient and so the attending physician was managing this particular patient. Eventually, the patient became asystolic so the attending physician pronounced him dead and the nurses disconnected him from the cardiac monitor and extubated him so the family could spend some time in the room before he was sent down to the morgue.

About 5 minutes after the family went in, they started shrieking and yelling that it was a miracle and he had arisen from the dead. One of his children had a camera and snapped a picture of the guy just as he sat up in bed with a shocked wide-eyed, open-mouthed expression on his face. The next week, that picture was on the front page of the National Enquirer with the headline “Patient Comes Back From The Dead”. The article included the name of the ICU attending physician who subsequently had to change his home phone to a new, unlisted number because of all the people calling him wanting him to bring back their own relatives from the dead.

What had happened was that the patient had breath-stacking due to the severity of his COPD and eventually breath-stacked enough that the high pressure inside of his chest prevented any blood return to the right ventricle and he became asystolic. Once he was taken off of the ventilator, the blood started to return into the chest and his heart started beating again. Although not well-recognized at the time, we now know this to be an important reversible cause of asystole during cardiopulmonary resuscitation and will usually give a trial of stopping ambu-bag ventilation in patients with asystole during CPR.

In this case, the patient did go on to die in the ICU a few days after his “miraculous” recovery from death. But ever since, I always wait a few minutes and re-check the pulse and respirations in a patient that I am pronouncing dead, even if I don’t have a sports page to read.