Every year, the Centers for Medicare & Medicaid Services (CMS) penalizes hospitals with excessively high readmission rates. The monetary penalty for every U.S. hospital in 2023 was recently released by CMS. In theory, a higher penalty should indicate lower quality and vice-versa. However, the methodology used in calculating the penalties is complex and nuanced with the result that the readmission penalty may not be entirely reflective of a hospital’s overall quality of care.

One of the provisions of the Affordable Care Act of 2010 (aka “Obamacare”) was to direct CMS to penalize hospitals with high rates of patients requiring readmission to a hospital within 30 days of an inpatient hospital stay. The first penalties were assessed in 2013; this is the 11th year of the penalty program. The calculations are only made for a few specific diagnoses and are based on data during 3 previous years. CMS calculates the amount of every hospital’s penalty in October or November each year and then that penalty is applied to the following year’s Medicare payments. The maximum penalty is 3%, meaning that for a hospital receiving the maximum penalty, CMS will reduce the amount that it pays that hospital for all of the Medicare services the hospital charges by 3% the next calendar year. Because many hospitals operate on razor-thin margins, even a relatively small reduction in what it gets paid by Medicare can be financially devastating. This is especially true for hospitals that operate on a July to June fiscal year, such as most academic medical centers, that can find themselves with an reduction in Medicare payments in the middle of the fiscal year. This can make it very difficult for these hospitals to accurately forecast their annual budgets since they do not know what they will get paid from Medicare services during the second half of their fiscal year.

You can look up every U.S. hospital’s readmission penalty for 2023 here. CMS uses a 4-step process to determine the amount of each hospital’s penalty.

The actual equation that CMS uses to calculate each hospital’s penalty is complex with the result that even most hospital administrators do not fully understand it: 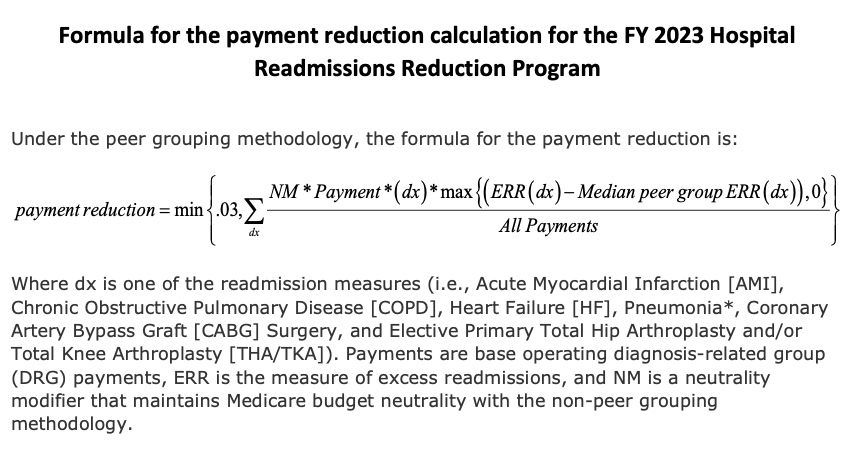 Lurking behind the equation are a lot of subtleties that affect how the public should interpret the readmission penalty.

The first 6 months of the COVID pandemic was a trying time for most hospitals. Many exceeded their maximum inpatient capacity. To care for inpatients, many had to recruit doctors and nurses who did not normally provide inpatient care. Because of this, CMS excluded all data from January 2020 to July 2020. As a result, rather than being based on 3 years of historical readmission data, this year’s penalty is based on 2.5 year of data.

A second effect of COVID was on the diagnoses used for penalty determination. Normally, CMS looks at readmission rates only for patients with one of six diagnoses: acute myocardial infarction, heart failure, pneumonia, COPD, coronary artery bypass surgery, and hip & knee replacement surgery. COVID disproportionately affected patients coded with pneumonia. As a result, CMS dropped pneumonia as one of the diagnoses used for readmission calculations. Therefore, the penalties were based on 5 diagnoses this year rather than 6.

Not all hospitals are included

It is impossible for hospitals to monitor their readmission rates

Every autumn, hospitals await the CMS report on their readmission data with no advance knowledge of what the hospital’s readmission rate will be. These are sent to the hospital as a “Hospital Specific Report”. For most other quality metrics, hospitals can continuously monitor their performance internally. For example, any hospital should be able to determine on any given day what their mortality rate, C. difficile incidence, and emergency department wait times are. But readmission rates are unique. Medicare looks at admission to any hospital within 30 days of an inpatient discharge, not just the the hospital that the patient was originally admitted to. The original hospital will know if a patient gets admitted again to that hospital but has no way of knowing if a patient gets admitted to some other hospital. For example, if a patient is discharged from the Ohio State University Medical Center, OSU can track any readmissions to an OSU hospital. However, if that patient gets admitted to a non-OSU hospital in Cincinnati, OSU will not know about it. On the other hand, Medicare gets billed by every hospital that a patient is admitted to so Medicare will know whenever a patient is admitted to any hospital in the United States. This phenomenon has little impact on small, rural or community hospitals since a patient admitted to that hospital will likely return to that same hospital given that it is the only hospital in the region. But for tertiary care or referral hospitals, patients often live hundreds of miles away and readmissions are more likely to occur at their local community hospital rather than at the tertiary care hospital. Thus a tertiary care hospital will have no idea what its readmission rate performance is until CMS sends out the Hospital Specific Reports.

Hospitals normally institute a continuous quality improvement process for quality metrics. This requires real-time monitoring of that quality metric so that the hospital can continuously change its procedures and policies to make their quality outcomes better. This turns out to be difficult for reducing 30-day readmissions because the readmission data that Medicare gets is 2-5 years old. To make an analogy, imagine how difficult it would be for a coach to improve his or her basketball team if the coach did not know the outcome of each game until 5 years after it was played.

All hospitals are not treated the same

One of the main criticisms of the initial formula that CMS used in the first years of the readmission penalty was that hospitals that cared for a large number of poor people were disproportionately penalized compared to hospitals caring for a largely affluent patient population. Poor individuals are less likely to have insurance, less likely to be able to afford medications, less likely to have transportation for doctor office visits, and less likely to have a primary care physician. All of these factors contribute to higher hospital readmission rates but these are factors that are largely not under the hospital’s control. In response to this criticism, several years ago, CMS changed the methodology used in readmission calculation to adjust for the percentage of poor and underserved patients that each hospital cares for. The current methodology uses the percentage of “dual-proportion” patients. This is based on the percentage of Medicare patients that also have full Medicaid benefits. Medicaid is used as a marker for low-income patients. CMS divides U.S. hospitals into one of five quintiles based on the percentage of a hospital’s dual proportion patients. Quintile #1 includes hospitals with fewer than 14% of its Medicare patients having dual coverage with Medicaid. Quintile #5 includes hospitals with more than 31% of its Medicare patients having dual coverage with Medicaid.  The breakdown of hospitals based on their percentage of dual proportion is seen in the graph below: 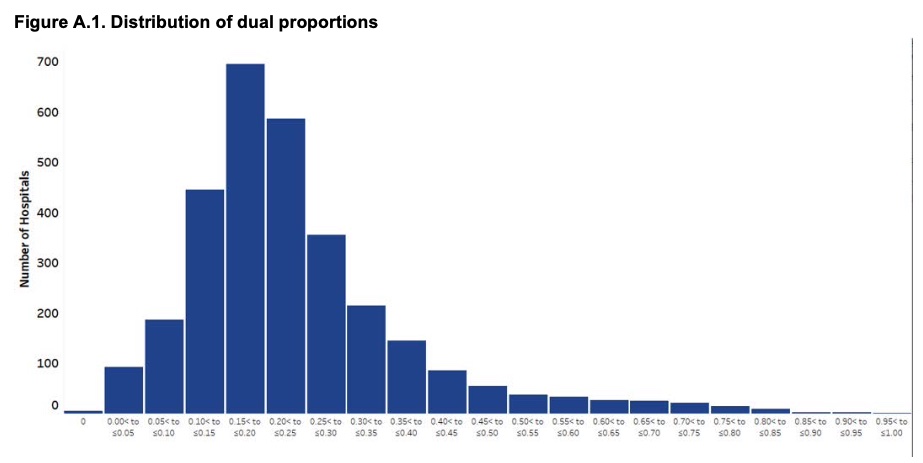 All hospital stays are not treated the same

Hospitals can “game the system” by putting certain patients in observation status in order to improve their readmission data and their mortality data. For example, take a patient who is admitted for a COPD exacerbation on February 1st. That patient then comes back to the hospital on February 20th after having a cardiopulmonary arrest following a drug overdose. The patient is intubated, receives mechanical ventilation, and placed in the ICU but it is clear that the patient has had severe brain and heart damage and is not expected to live beyond 24 hours. The person overseeing the hospital’s quality data will advise the ICU physician to admit the patient as an observation stay so that the hospital stay does not count as a readmission and so that the death does not count as an inpatient mortality. On the other hand, the person overseeing the hospital’s finances will advise the ICU physician to admit the patient as an inpatient stay so that the hospital gets paid more from Medicare. Whichever of the two hospital administrators is most persuasive (or most vocal) will usually win out. The result is that hospitals that more liberally designate patients as being in observation status can lower their CMS readmission penalty. The goal of Medicare auditors is to pay hospitals as little as possible so they will penalize hospitals who put patients in inpatient status who should really be in observation status. However, those auditors do not care if a hospital puts patients in observation status who should really be in inpatient status since it saves Medicare money.

For some hospitals, it is cheaper to pay the penalty

Given that the average hospital has $40 million in annual Medicare revenue and that the average hospital has a 0.43% Medicare penalty in 2023, that average hospital will have a $172,000 penalty. Implementing a readmission reduction program in a hospital can be very costly. It requires hiring data analysts to monitor readmissions, instituting costly discharge transition clinics, and increasing the percentage of patients in observation status. For many hospitals, the total cost to reduce readmissions sufficiently to avoid a CMS penalty can be considerably more than the expense of the penalty. In general, the larger the hospital and the higher the percentage of Medicare patients in a hospital’s payer mix, the more likely it will make financial sense for a hospital to devote a lot of money into a readmission reduction program. Furthermore, because the readmission penalty is based on the hospital’s performance between 2-5 years previously, it will take 5 years before money spent today on a readmission reduction program will fully affect the annual CMS penalty. And it is likely that CMS will continue to revise the readmission penalty formula so that the formula will look considerably different over the next 5 years.

How can the process be improved?

Medical care in the United States is more expensive than anywhere else in the world and it is essential for our economy that we reign in healthcare costs. Because hospitalizations are expensive, reducing unnecessary hospital admissions is central to controlling those healthcare costs. Readmissions to the hospital within 30 days of hospital discharge are frequently avoidable if processes are in place to ensure that patients get appropriate outpatient care. This includes filling medication prescriptions, keeping office appointments with medical providers after discharge, access to outpatient physical & occupational therapy, etc. Penalizing hospitals for excessive readmissions is one way to reduce costs by incentivizing hospitals to institute processes that reduce hospital readmissions. However, after eleven years of the CMS Hospital Readmissions Reduction Program, it is clear that the program can do better. Some specific improvements include: