Every year, CMS publishes the National Health Expenditure (NHE) data; the most recent information was updated in December 2019 and reports data from 2018. The NHE gives important insight into how Americans spend their money on healthcare. For example, in 2018, health expenditures increased by 4.6% to an average of $11,172 per American. This represents a startling 17.7% of our gross domestic product. The growth in spending was not uniform, however – Medicare spending increased faster than any other source:

To put that in context, in 2018, the U.S. annual inflation rate was 1.9%. The average household income rose 0.8% during this period. In other words, the average American’s health costs increased 6 times more than their annual income increased in 2018.

The report shows that although Medicare spending increased the fastest, total expenditures are still the greatest for private health insurance. Overall, the total national health expenditures were $3,649,400,000,000 (i.e., $3.6 trillion). Of that:

The NHE report also projects expenditures over the next 7 years at an annual increase of 5.5% per year. This will reach an estimated $6.0 trillion by 2027. As a percent of gross domestic product, health expenditures will rise to 19.4% by 2027. Currently, about 10% of the American population is uninsured and this is projected to remain the same through 2027 (although this percentage is subject to change based on changes in Federal healthcare legislation). 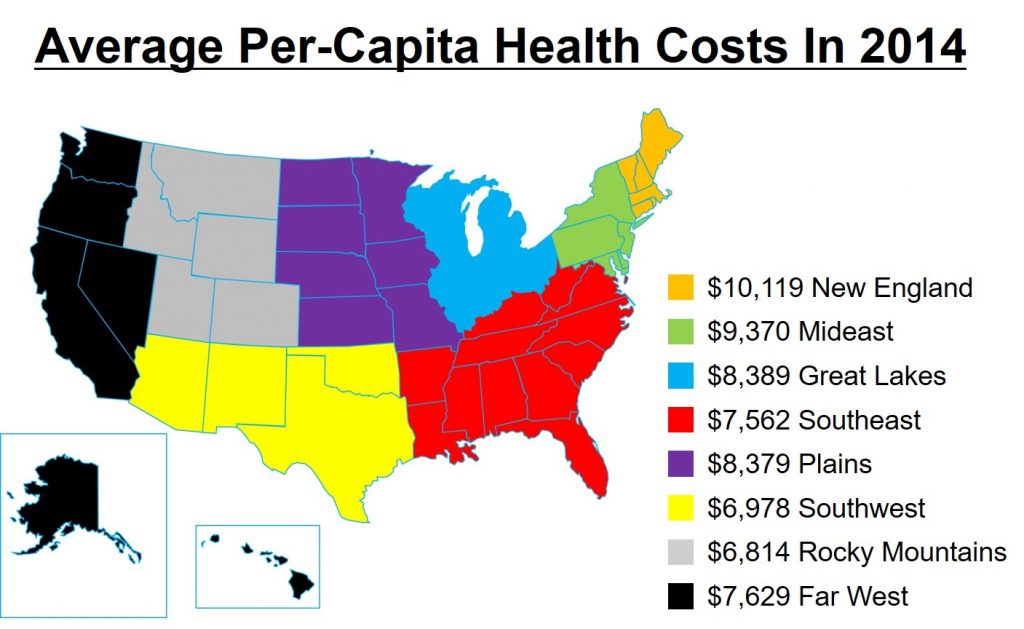 State-specific per capita health expenditures are available through 2014 (data will be updated with the upcoming 2020 U.S. Census). Six years ago, in 2014, the average personal health expense per person was $8,045. There was considerable variation by individual states with Alaska being most expensive ($11,060 per person) and Utah being the least expensive ($5,981 per person). However, states could be grouped into regions with the states within those regions having fairly similar costs. New England states were the most expensive and Rocky Mountain states wee the least expensive. The data can also be analyzed by healthcare costs as a percent of each state’s gross domestic product – Maine ranked the highest at 22.3% of GDP and Wyoming ranked the lowest at 9.3% of GDP in 2014.

Not surprisingly, as people age, their health costs go up. In 2014, the average personal health care spending per American child was $3,749, per working-age American was $7,153, and per American over age 65 years was $19,098. Even though the elderly only accounted for 15% of the U.S. population in 2014, they accounted for 34% of total health spending. For all age groups, per person spending for females was higher than for males with an overall average of $8,811 per female versus $7,272 per male.

The U.S. has an almost insatiable appetite for health care. However the NHE projections through 2027 show that there is a limit to what we can afford. It may be time for our country to put our health care appetite on a diet.