The annual OECD Health Statistics 2017 report by the Organisation for Economic Co-operation and Development was released 2 weeks ago. Every year, I can spend hours reading through the database and statistics that give us enormous insight into healthcare across the planet. The OECD is a group of 35 of the most economically developed countries in the world. It was originally founded in 1948 to administer funds from the United States and Canada to support the Marshall Plan after World War II. Its mission is to compare data and policies in order to maximize economic growth, employment, and quality of living of member countries. One of the areas of focus is healthcare. 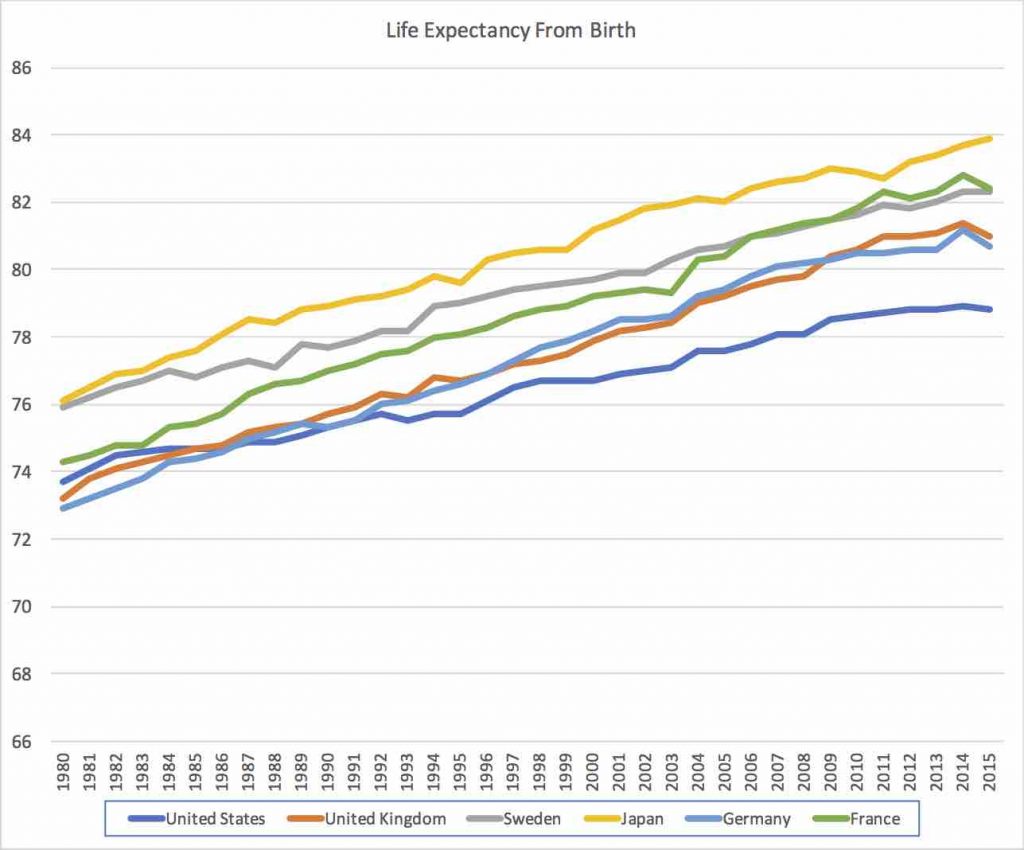 Once again, the United States falls considerably behind peer nations in life expectancy. A person in the U.S. can expect to live 78.8 years from birth (81.2 years for woman and 76.3 years for men). The only eight countries where the life expectancy is lower are the Czech Republic, Estonia, Hungary, Latvia, Mexico, Poland, the Slovak Republic, and Turkey. For the purpose of this analysis, I’ve selected 5 peer nations to compare the U.S. to and as you can see, each year, we continue to fall further behind in life expectancy. Of concern, American life expectancy actually dropped from 2014 to 2015 (the most recent year of available data). I did not include Canada because the OECD does not have statistics on it for the last 3 years but in general, Canada’s life expectancy is fairly similar to Sweden’s, which is included in this graph.

One reason that life expectancy could be low is because of a high infant mortality rate and it turns out that the United States does have a higher infant mortality rate compared to other countries at 5.8 per 1,000 life births. In contrast, the infant mortality rate in the U.K. is 3.9, Sweden is 2.2, Japan is 2.1, Germany is 3.3, and France is 3.7. In fact, the only OECD nations with a higher infant mortality rate than the U.S. are Mexico and Turkey. Unfortunately, even if a person lives through infancy in the United States, they still have a slightly lower life expectancy than most other OECD countries. A woman who lives to age 65 (Medicare retirement age) can expect to live 20.6 more years, that is to say, to age 85.6 years old. A man who lives to age 65 in the U.S. can expect to live 18 more years, that is, age 83 years old. Based on this data, I personally have another 22.8 more years to live.

What about heathcare costs? Well, it turns out that we pay more for healthcare than any other country on the planet. In 2016, Americans spent $9,892 per person on healthcare. No other country even comes close. Although healthcare costs world-wide are increasing, American healthcare is increasing faster than other countries. Our neighbor to the north, Canada, only spent $4,644 per person in 2016 – that is less than half of what we spent. If I was to move 120 miles to the north and retire in Canada, I could live 10 months longer and spend $124,378 less to do it. 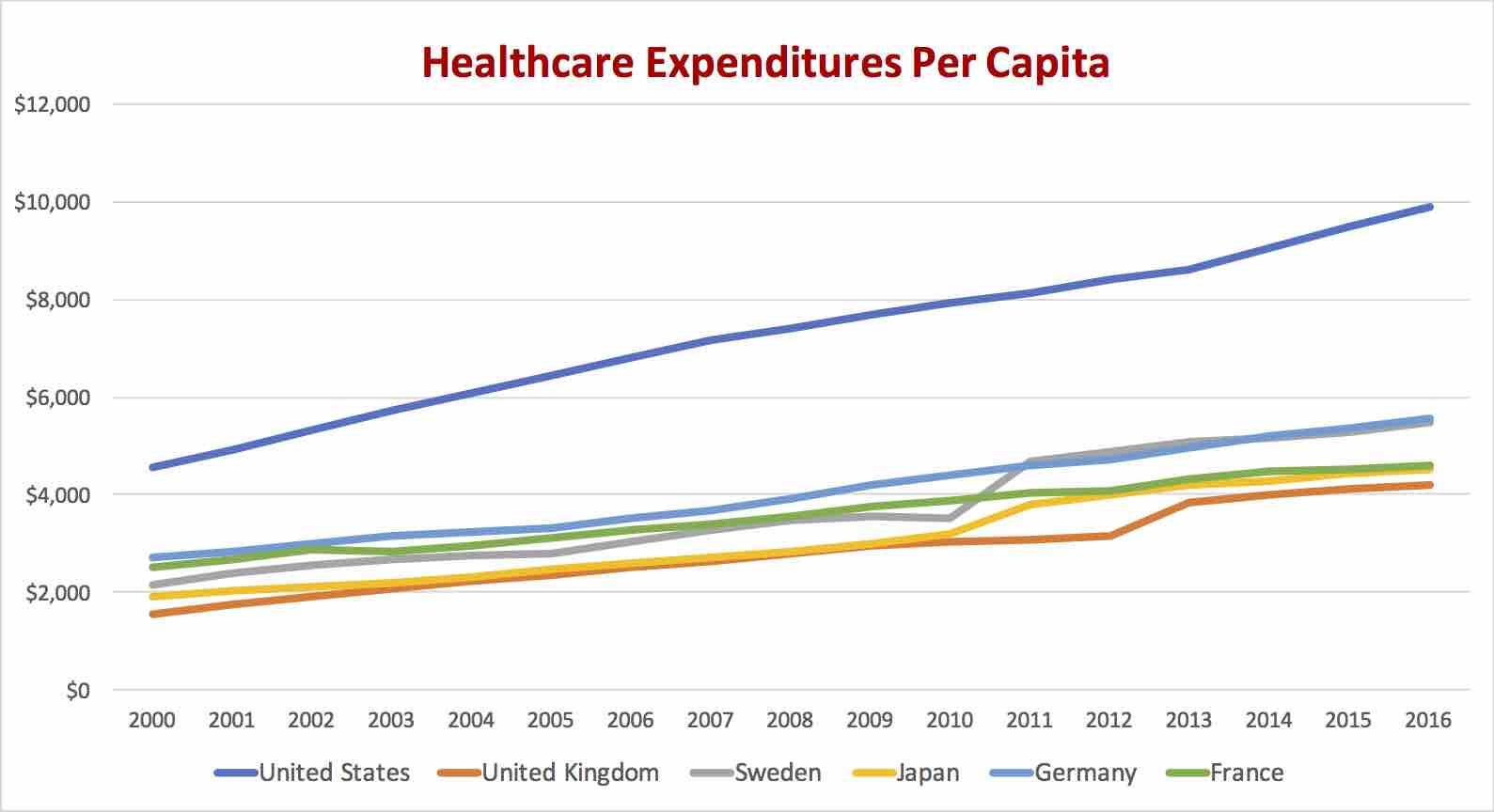 If you put these two analyses together, the average American today can expect to pay $9,892 per year for healthcare for 78.8 years. That is a total of $779,490 per person over a life time. Comparing lifetime healthcare costs to other peer countries, each American will spend nearly one-third of a million dollars more than our next closest peer and we won’t live as long. We are at an economic competitive disadvantage.

Clearly, we can’t keep doing what we have been doing. We are paying way to much for what we get. It is like Americans paying $10 per pound for hamburger when everyone else in the world is paying $4 for filet mignon. The definition of value is quality ÷ cost. I would like to argue that one of the main reasons that we have such poor value in healthcare is that, unique among other OECD nations, we have resisted adopting a single payer health financing system. Countries with single payer systems have lower healthcare costs and have higher healthcare outcomes. Single payer systems result in substantially reduced healthcare administrative costs compared to the U.S. system of divided healthcare financing. Because single payer systems have a stronger negotiating position for prices of drugs, medications cost less. An analogy would by how Walmart can buy the same pair of jeans at a lower cost than an independent clothing store and then sell those jeans at a lower price to the consumer – one of the reasons why Walmarts have proliferated and mom and pop drugstores and grocery stores have closed.

It is hard to look at the OECD data and not come to the conclusion that we need to conserve rather than be conservative. Those two words sound so similar yet have some a profound difference in our country’s future healthcare.