The computer engineering geniuses at Apple have done it again. They’ve created yet another device that I’m probably going to have to buy. The new Apple Watch (series 4) has the ability for anyone to monitor their EKG (sort of). But what are we as physicians going to do with this data? Most electronic medical records permit patients to upload images to their patient portals for their physicians to have access to. Inevitably, some patients will overuse this system – some physicians are already drowning in dozens of Apple Watch rhythm strips being submitted by a single patient. But even for the patient who sends in a single suspicious rhythm strip, if the physician is going to make a clinical decision based on the strip, what are the implications? So, this presents several questions for physicians. 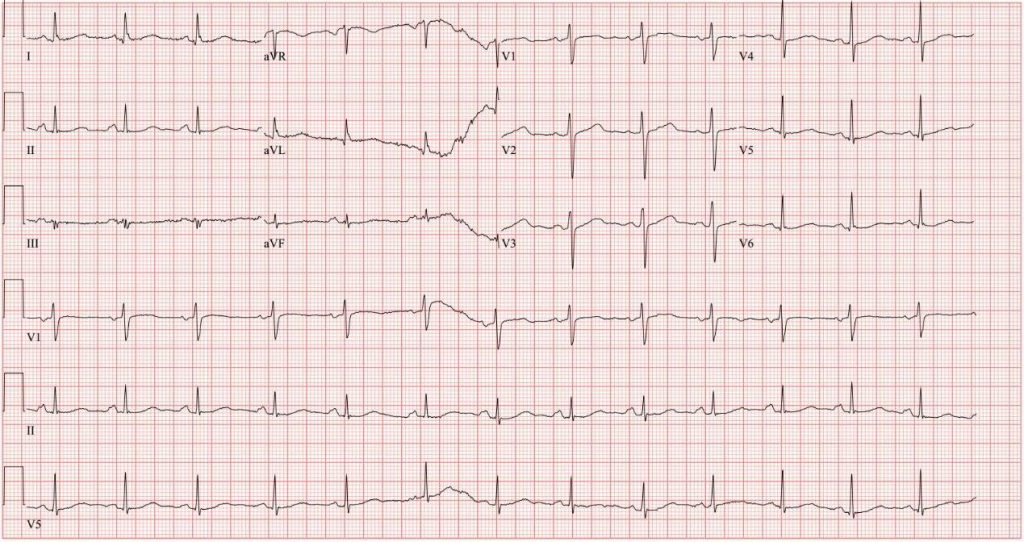 The Apple Watch 4 can monitor the heart rhythm in two ways. First, it can measure the regularity of the heart beat by essentially taking the patient’s pulse; this can be reported as regular or irregular. Second, it can measure a single lead EKG reading and it is this latter feature that is really innovative. All EKGs are done by positioning 2 electrodes on different parts of the body and then measuring the electrical signal between those electrodes. A full EKG uses 12 electrodes and produces 12 different wave forms, or leads. The first three of these leads are the limb leads I – III. Lead I measures the signal between the left arm and right arm. Lead II is between the left leg and right arm. Lead III is between the left leg and left arm. The problem with a watch is that an electrode sensor on the back of the watch only has contact with one arm but by placing a second electrode sensor on the knob of the watch, a person can touch that second electrode with a finger from the other arm, thus generating a lead I EKG tracing by having an electrode in contact with both the left and the right arms simultaneously.

What can it tell you?

What should you do if the patient uploads a rhythm strip?

Although we all get trained in EKG interpretation in medical school, most physicians are not credentialed to read 12-lead EKGs. In most hospitals, physicians must apply for hospital privileges to interpret EKGs and generally, this will be limited to cardiologists; in smaller hospitals, it may be a general internist who has EKG interpretation privileges. Reading an Apple Watch rhythm strip is considerably less complicated than reading a full 12-lead EKG but nevertheless, physicians should know their own limits as to whether they can confidently identify atrial fibrillation (or some other abnormal rhythm) by a rhythm strip. So, for example, if you are a podiatrist or dermatologist and do not normally look at heart rhythm strips, you may want to tell the patient who uploads an Apple Watch rhythm strip to your electronic medical record that EKG interpretation is not part of your normal practice and that they should check with one of their other physicians. However, most primary care physicians are trained in the recognition of atrial fibrillation.

Can you bill for review of the rhythm strip?

The short answer is in 2018, no but in 2019… maybe. Lets take a look at the CPT code possibilities for Apple Watch rhythm interpretation.

Who should get one?

Since the main thing the Apple Watch EKG app does is tell whether there is atrial fibrillation, it will primarily be useful for patients at risk of atrial fibrillation or with a history of previous atrial fibrillation. Better identification of patients with intermittent atrial fibrillation really could save lives since about 15% of all strokes are the result of untreated atrial fibrillation. My suspicion is that a lot of other people with occasional PACs or PVC (premature atrial/ventricular contractions) will also be uploading rhythm strips to understand why they have occasional subjective “skipped heartbeats”. Although not designed for PAC or PVC identification, this could be a side benefit of the app. Similarly, ventricular arrhythmias such as non-sustained ventricular tachycardia may be identifiable. Bradycardic rhythms such as sinus bradycardia and various forms of heart block (1st degree, 2nd degree, and 3rd degree) may be identifiable. Even if these rhythms cannot be diagnosed with complete certainty, the tracings from the Apple Watch EKG app may be suspicious enough for the physician to direct the patient to seek medical attention where a full 12-lead EKG or a 24-Holter monitor can be performed.

I’ve never had atrial fibrillation or any kind of heart problem. So, am I going to get an Apple Watch 4 with an EKG app… well, yeah, probably.