If you want to understand Medicare, don’t ask your doctor. Medicare details are not taught in medical school and with most physicians now being employed by either hospitals or large group practices, physicians do not need to understand the intricacies of Medicare in order to run their medical practice. I am a physician who was formerly the treasurer of a $1.5 million physician group practice and formerly the medical director of a 200-bed hospital but it was not until I turned 64 and started to plan for Medicare that I realized how little I knew about it. As the annual Medicare open enrollment period begins, seniors are getting inundated with advertisements to join commercial insurance Medicare Advantage plans. But what are these plans and are they right for you or your patients?

In simplest terms, Medicare is nationalized healthcare for Americans who are either over age 65 or who are disabled. There are additionally two medical conditions that qualify a person to be eligible for Medicare: kidney disease requiring dialysis and amyotrophic lateral sclerosis (ALS). Medicare is primarily funded in two ways: (1) federal payroll (FICA) taxes deducted from paychecks when Americans are employed and (2) Medicare monthly premiums after Americans turn age 65. The payroll taxes cover Medicare Part A and the monthly premiums pay for Medicare Parts B & D.

Medicaid is a different but related program that pays for healthcare for low-income individuals, low-income families, and disabled citizens. Unlike Medicare that is entirely funded through the federal government, Medicaid is funded by both the federal government and state governments. As a result, each state makes its own rules about Medicaid resulting in Medicaid eligibility and services varying widely from one state to another.

Medicare (Parts A & B) and Medicaid were created in 1965 by Title XVIII of the Social Security Act. Prior to that time, 40% of American seniors had no health insurance and had no way of paying for healthcare. Since 1965, Congress has passed additional laws expanding or clarifying Medicare coverage including the creation of Medicare Part C in 1997 and Medicare Part D in 2006.

Currently, according to the most recent CMS data, 18.4% of Americans are covered by Medicare and 17.8% are covered by Medicaid. However, because most healthcare costs occur in elderly people, Medicare accounts for a disproportionately higher percentage of total U.S. healthcare expenditures at 21.1%. Although not shown in the graph below, the percentage of healthcare costs paid by Medicare fell in 2020 because of federal COVID programs that are included in the “Other Third Party Payers and Programs” (maroon line). 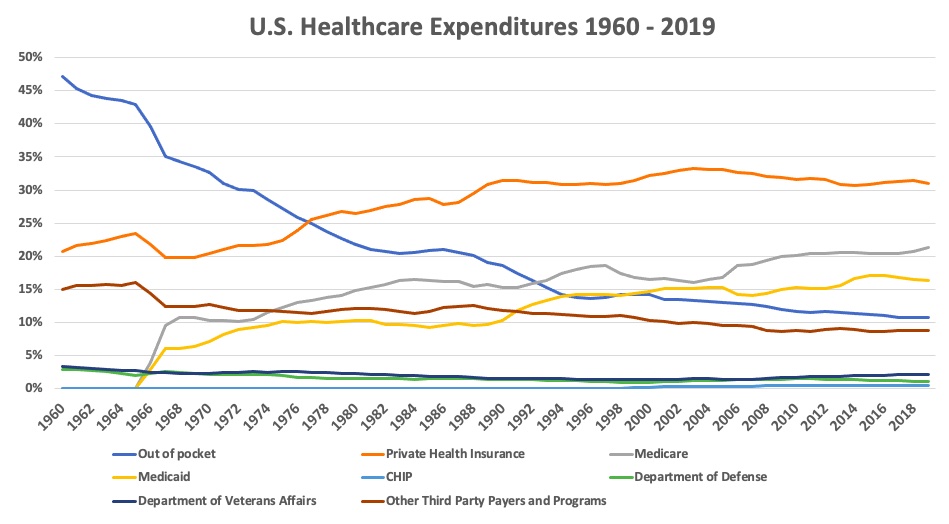 The components of Medicare include Parts A, B, C, and D. In addition, there are Medigap plans that can supplement Parts A & B.

There is a similar payment scale for skilled nursing facilities with Medicare Part A covering all costs for the first 20 days. For days 21-100, there is a  $194.50 co-payment per day. After 100 days, the individual is responsible for all daily charges.

Medicare Part B covers physician charges (both inpatient and outpatient) as well as office visits, outpatient hospital charges, chemotherapy, and many intravenous drugs administered in a physician office. Unlike Medicare Part A, a person must pay monthly premiums in order to receive Medicare Part B, starting at age 65. It is important to sign up within 3 months of turning 65 because failure to sign up in time will result in a 10% monthly penalty (in addition to the monthly premium). The monthly premium depends on the person’s annual income. This is based on the modified adjusted gross income (MAGI) reported to the IRS two years ago (thus, your 2022 Medicare Part B premiums are based on your 2020 income tax forms. The MAGI includes income such as employment wages, pensions, 401(k)/403(b)/457 withdrawals, interest, dividends, and social security payments.

Medicare Part B has an annual $233 deductible and a 20% co-pay for most charges. Notably, “observation status” admissions to the hospital are considered outpatient visits and are thus covered by Medicare Part B and not Part A. Part A only covers “inpatient status” admissions which generally require a patient to have a hospital stay of greater than 2 midnights. Overall, about 20% of hospitalizations are considered to be observation status but for some hospitals, that number can be as high as 50%. As a result, many patients face unexpected 20% co-pays for hospitalizations.

Medigap. These are health insurance policies that can cover Part A deductibles, Parts A & B co-pays, and foreign travel health costs. There are 10 different Medigap plans, 8 of which are open to new enrollees. Each plan has different degrees of extended coverage. They are sold by commercial insurance companies and the monthly premiums vary but average about $155 per month. There are a number of rules pertaining to Medigap plans:

Medicare Part C (also known as Medicare Advantage Plans) can best be thought of as privatized versions of Medicare Parts A & B combined with a Medigap policy and a Part D prescription drug plan. Under these plans, commercial health insurance companies are paid each month by Medicare to outsource your healthcare coverage. In return, the commercial insurance companies pay the services normally covered by Medicare Parts A & B. Medicare Advantage plans also pay for charges that would otherwise be covered by a Medigap policy and usually cover prescription drug costs as well. These plans sometimes provide additional services not covered by traditional Medicare Parts A & B such as fitness programs, dental insurance, and vision insurance. Overall, 45% of new Medicare enrollees chose to enroll in Medicare Part C rather than traditional Medicare.

Because it would seem that the Medicare Advantage Plans offered by commercial insurance companies provide much more comprehensive medical care at a lower cost than traditional Medicare plus a Medigap policy, many pundits have suggested that all of Medicare should be privatized. However, there is a dark side of the Medicare Advantage Plans. First, they bill Medicare for each senior that they enroll. However, they get paid by Medicare based on how sick each enrollee is. For that reason, the plans have gone to great lengths to document every medical condition that each enrollee has and in many cases, they have exaggerated these conditions by inflating enrollees’ “risk scores”. A report by the Kaiser Family Foundation found that Medicare Advantage Plans overcharged the federal government by $106 billion between 2010-2019. The problem seems to be accelerating as $34 billion of these overcharges were in 2018-2019 alone. There is a bright side to this, however. Because insurance companies are incentivized to document every medical condition that each enrollee has in order to increase patients’ risk scores, the insurance companies are incentivized to get their enrollees screened for as many diseases as possible. This resultant emphasis on screening has led to many Medicare Advantage Plans out-performing traditional Medicare when it comes to disease screening and routine wellness visits.

The cost of Medicare Part D depends on both the cost of the specific Part D plan and the modified gross annual income of the enrollee. Each Part D plan has different costs, depending on drug coverage. The average Part D base premium is $33.37. Similar to Medicare Part B, there is an additional add-on cost to the base premium for those people with higher modified annual gross income:

Part D plan costs do not stop with monthly premiums, however. In addition, there is an annual deductible that can vary from $0 to more than $480, depending on the individual Part D plan. There are also co-pays on each drug each month. The co-pay amount varies from plan to plan and can vary depending on specific drugs within a plan. A person’s costs also change during the coverage gap (also known as the “donut hole”). Each year, the coverage gap begins when a person has spent $4,430 in out-of-pocket expenses in their Part D plan (for deductible and co-pay amounts). When in the coverage gap, there is a limit that Part D will cover for drugs and the enrollee pays up to 25% of the cost of a drug out-of-pocket. Once a person’s annual out-of-pocket drug expenses reach $7,050, the coverage gap ends and “catastrophic coverage” begins resulting in the individual only having to pay a 5% co-pay for prescribed drugs for the rest of the year.

As with Medicare Advantage plans, each Medicare Part D plan has its own formulary of covered drugs and the drugs on the formulary can change each year. For this reason, it is important that seniors considering a Part D plan look carefully at the plan’s formulary to confirm that their current prescription drugs will actually be covered.

In my opinion, there are really only three realistic options: (1) Sign up for a Medicare Advantage Plan. (2) Sign up for a combination of traditional Medicare + a Medigap plan + a Part D plan. (3) Sign up for Medicare Parts A & B and continue your group health insurance plan through your employer, union, or retirement system. Relying on traditional Medicare alone is risky because Medicare Parts A & B deductibles and co-pays can be financially devastating if you do not have a Medigap policy. Prescription drug costs can be financially devastating without a Part D plan.

Part A. If you or your spouse has previously worked for at least 10 years, Medicare Part A is free – never turn down free healthcare. Sign up 3 months before you turn 65. You sign up through Social Security (on-line or in person).

Part B. Sign up the same time you sign up for Medicare Part A. If you continue to work past age 65 and get comprehensive health insurance through your employer, then sign up when you retire (although some employers will require you to sign up for Medicare Parts A & B at age 65 even if you are continuing to receive employer-provided group health insurance). You sign up through Social Security (on-line or in person).

Part C (Medicare Advantage Plans). Sign up as soon as you have signed up for Medicare Parts A & B and have your Medicare number. Medicare Advantage Plans are usually preferable to traditional Medicare + a Medigap policy + a Part D plan for people who are relatively healthy. People with serious diseases, such as cancer, need to be careful when signing up for a Medicare Advantage Plan since traditional Medicare + a Medigap policy + a Part D plan may be less expensive in the log run and may allow more choices in physician specialists and specialty hospitals. If you have group health insurance through your employer, union, or retirement system, you do not need a Part C plan. You sign up through a commercial insurance company.

Part D. Sign up as soon as you have signed up for Medicare Parts A & B. Only sign-up for a Part D plan if you intend to enroll in traditional Medicare and not in a Medicare Advantage Plan. If you have group health insurance through your employer, union, or retirement system, you do not need a Part D plan. You sign up through a commercial insurance company.

This all seems really, really complicated

When first enacted, the U.S. Federal income tax system was very simple. Since that time, there have been dozens of new tax laws passed that have resulted in the tax code becoming extraordinarily complicated. The same thing has happened with Medicare – when first enacted, it was simple. But since then, numerous pieces of legislation have added, modified, or deleted parts of Medicare coverage resulting in Medicare now becoming so complex that most people need help navigating all of the decisions they must make when signing up for Medicare. It is important to carefully consider factors such as in-network providers, deductibles, co-pays, and medication formularies when selecting among Medicare options. Like most things in life, when it comes to Medicare options, you get what you pay for and often the cheapest option in the short-run can end up being the most expensive option in the long-run.