This week, the latest results of the Nationwide COVID-19 Infection-Induced Antibody Seroprevalence (Commercial laboratories) Study was released. These results estimate the percentage of the population of each state that has been infected with COVID-19 as of the end of December 2022. The results are quite remarkable and indicate that there has been enormous variation in the frequency of the infection among the states and among different age groups.

Limitations of the seroprevalence study

The methodology of the seroprevalence study was published in the April 2021 edition of JAMA Internal Medicine. Because the samples are anonymous, there are several potential limitations of the study that could affect the prevalence results:

Despite these limitations, compared to other epidemiology studies, the commercial lab seroprevalence study gives us the most accurate estimate of the percentage of the U.S. population that has had a COVID-19 infection. First, it is likely that the limitations above that result in overestimation are balanced out by those limitations that result in underestimation of the number of infections. Second, it is likely that the above limitations apply more-or-less equally among different states, allowing reasonably accurate comparison of the rates of infected between different states.

The CDC regularly reports on the total number of infections (based on nasopharyngeal PCR or rapid antigen tests) per 100,000 population since the pandemic began. These results indicate a low of 12.2% of the population in Maine to a high of 30.2% of the population in Rhode Island. However, these results depend on COVID test results reported to local health department and underestimates the true number of infections because (1) many infected people are asymptomatic and do not get tested, (2) many infected people use retail COVID tests with results that are not reported to the health department, and (3) many symptomatically infected people choose to not get tested. For these reasons, the seroprevalence studies offer a more accurate measure of the true rates of infection. The commercial lab study indicates enormous variations in the rate of COVID among the states and territories from a low of fewer than 1 out of every 10 people to a high of nearly 1 out of every 2 people 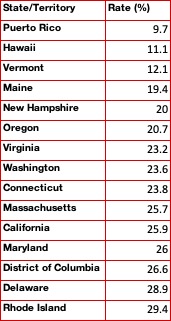 States with the lowest rates of infection. 15 states and territories had antibody prevalence rates of less than 30% of their population. The lowest rates were in Puerto Rico (9.7% of the population previously infected) and Hawaii (11.1% of the population previously infected. Living on an island was protective against becoming infected. Rhode Island (which is not really an island) is notable because by nasopharyngeal testing, it has had the highest rate of infection in the U.S. but by seroprevalence testing, it has had one of the lowest rates of infection. Rhode Island has the third highest vaccination rate (78.1% of its population) in the country. It is likely that for Rhode Island, the seroprevalence data is more accurate than the case rates determined by nasopharyngeal testing. The common feature of these 15 states & territories is that they all have high COVID vaccination rates with greater than 65% of their population fully vaccinated. We’ll give these states a grade of “A” for controlling the pandemic. 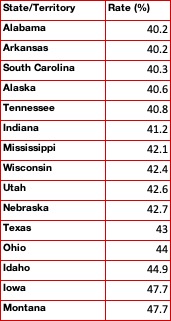 States with high rates of infection. 15 states had antibody prevalence rates above 40%. Iowa and Montana tied for the highest rate of infection with 47.7% of their population having been infected during the pandemic. These states also have low COVID vaccination rates with all of these states having fewer than 65% of their population fully vaccinated. This provides additional evidence that vaccination prevents infection. We’ll give these states a grade of “F” for controlling the pandemic. Lamentably, my own state of Ohio is the 4th worst in the country for antibody prevalence. The tone for Ohio’s response to COVID-19 was set early in the pandemic when AR-15 wielding anti-maskers protested in the front yard of our state’s Director of Public Health when she was trying to get her children off to school… she resigned, leaving Ohio with no health department director for months.

There was a striking relationship between age and seroprevalence of COVID-19 antibodies with the study indicating that far more younger Americans have been infected than older Americans:

In this table, the second column from the left is the seroprevalence of COVID-19 antibodies indicating past infection for each age group. The third column is the percentage of the population in each age group that has died of COVID since the pandemic began. The fourth column is the sum of the seroprevalence plus the percentage of each age population that died of COVID; this column gives a more accurate number of the total percentages of Americans in each age group that became infected with COVID and then either lived (seropositive group) or died of COVID (% died group). Even correcting for the fact that most of the deaths from COVID occurred in people over age 65, it is still clear that younger Americans were more likely to become infected than older Americans.

So what does all of this mean?

Epidemiologists talk of “herd immunity” when enough of the population has immunity from either vaccination or past infection. Most epidemiologists now believe that between 75% and 90% of the population must have immunity in order to bring an end to the pandemic by herd immunity. Because people can get re-infected with COVID, the coronavirus will probably never go away but if we achieve herd immunity, we should be able to keep the number of new infections relatively low. More importantly, herd immunity should keep the number of hospitalizations and deaths extremely low. In other words, the goal of herd immunity is not to prevent all COVID infections but instead to prevent COVID hospitalizations and COVID deaths. Indeed, the current data indicates that most of the people who are hospitalized with COVID are unvaccinated and almost all of the people who are die of COVID are unvaccinated.

To forecast what COVID may look like in future years, consider rhinoviruses. They cause 1/3 to 1/2 of all common colds. Given that the average person gets 2-3 colds per year, most people become infected with a rhinovirus every year and nearly everyone has been infected at least once by adulthood. Because re-infection with COVID can occur, it is likely that COVID will continue to circulate in the community for the indefinite future. Eventually, nearly everyone will have either been infected or been vaccinated. At that point, hospitalization or death from COVID should become uncommon. In other words, COVID won’t go away but it won’t kill you in the future.

The primary goal of medicine is to prevent people from becoming severely ill or dying from infections. A more aspirational (but usually unobtainable) goal is to prevent all infections, even mild ones. As long as there are people with weak immunity against COVID (either because they are not vaccinated or they have not yet been infected), then COVID will continue to cause hospitalization and death.

Therefore, our realistically obtainable goal in public should be to prevent severe COVID infection and prevent death from COVID. In that sense, we are reaching a point where we should not be looking at vaccine mandates but instead be looking at immunity mandates. In other words, instead of requiring all of a business’s employees to be vaccinated, we should be requiring all employees to either be vaccinated or have antibodies indicating past infection.

Immunity mandates should become our new public health doctrines – for our workplaces, our schools, and our military. For me personally, sign me up for a second booster when they become available… but I’ll pass on getting a COVID-19 infection to keep my immunity up.