A few years ago, one of our physicians was threatened by a patient who said he was “…going to come after you with my gun” because she refused to prescribe opioid pain medications for him. She was very distraught and came to me looking for measures to keep her safe in the workplace. In the past week, there have been several homicides at American healthcare facilities that have caused me to think back to that doctor.

Doctors and nurses facing the wrath of angry patients and their families is nothing new. Thirty-five years ago, when I was a fellow in training, a woman sent our division a letter saying that she was going to come to the hospital to kill all of the pulmonary and critical care doctors with her automatic rifle because her husband had died in our ICU. I had never even met her or her husband. What is different today compared to 35 years ago is that weapons are much more easily available and America has increasingly developed a culture of gun violence.

In the latter half of the last century, the United States was embracing greater degrees of gun control. In 1967, then governor Ronald Reagan signed the California Mulford Act that prohibited the public carrying of loaded firearms without a permit; violations were subject to a felony. At the time of signing, Reagan famously said that there was “…no reason why on the street today a citizen should be carrying loaded weapons”. The Mulford Act was notably supported by the NRA, which at the time was an organization primarily focused on the recreational use of guns and on gun safety. In 1993, the Brady Bill required mandatory criminal background checks on anyone purchasing firearms. In 1994, the Violent Crime Control and Law Enforcement Act banned the sale of assault rifles in the U.S.; the law had a 10-year limitation and expired in 2004. However, over the last 15 years, due largely to lobbying by special interest groups that promote gun availability, weapon laws have been rolled back. Coincident with this has been an increase in gun deaths, mass shootings, and healthcare shootings. Prior to the 1994 assault rifle ban, there were an average of 7.2 mass shooting deaths per year in the U.S. During the ban, that number dropped to 5.3 per year. After the ban expired in 2005, the average number of mass shooting deaths rose to 25 per year.

An FBI report found that there were 13,927 U.S. homicides in 2019. Firearms were by far the most commonly used weapons, accounting for 73% of the homicides. 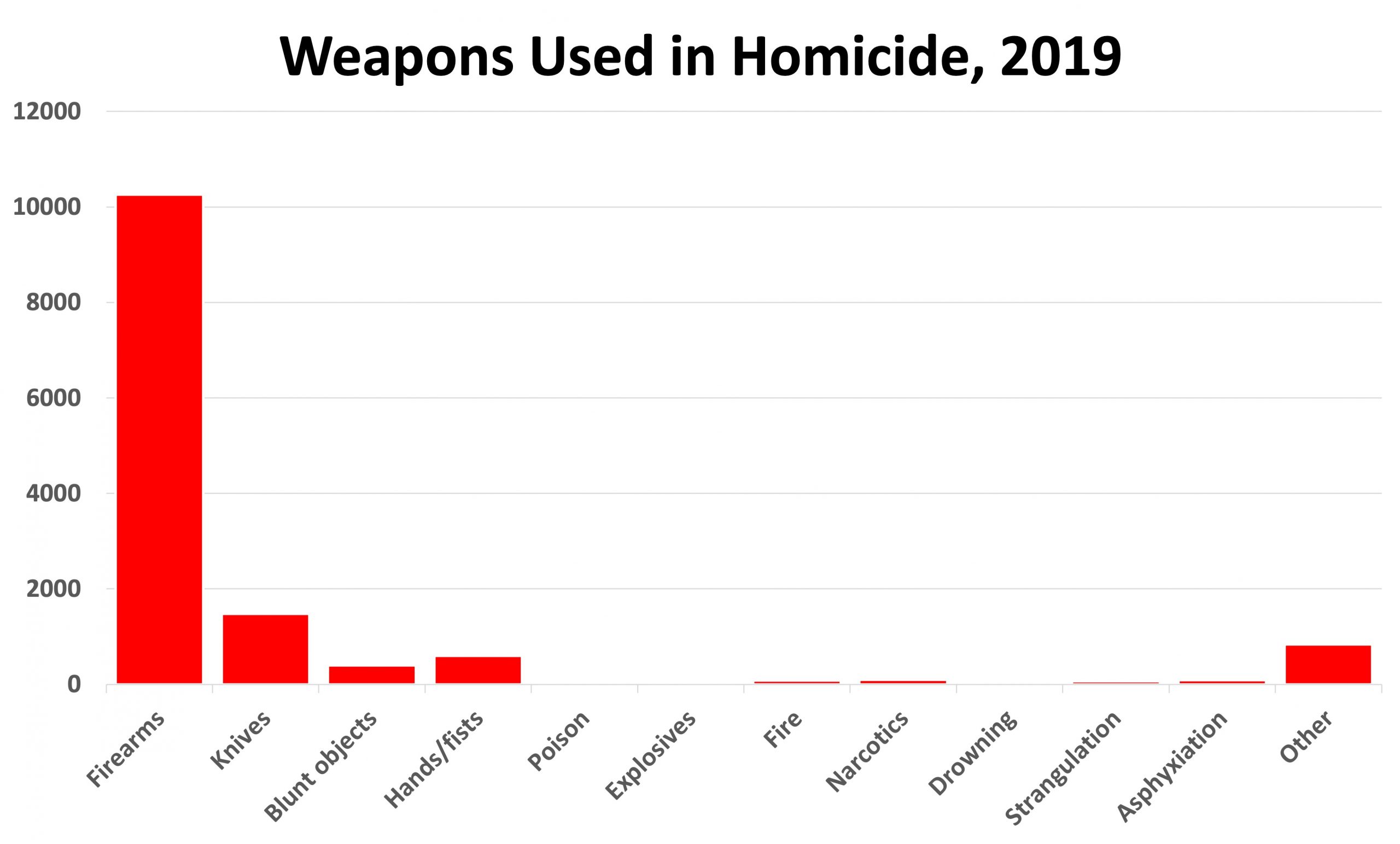 Semi-automatic rifles (such as the AR-15 rifle) loom large in the public perception of homicides, largely due to their use in high-profile mass shootings. However, handguns are by far the most commonly used weapons in American homicides and account for 91% of firearm-related homicides. Firearms are also the method of choice for suicide in the United States and account for 53% of deaths by suicide per CDC data. 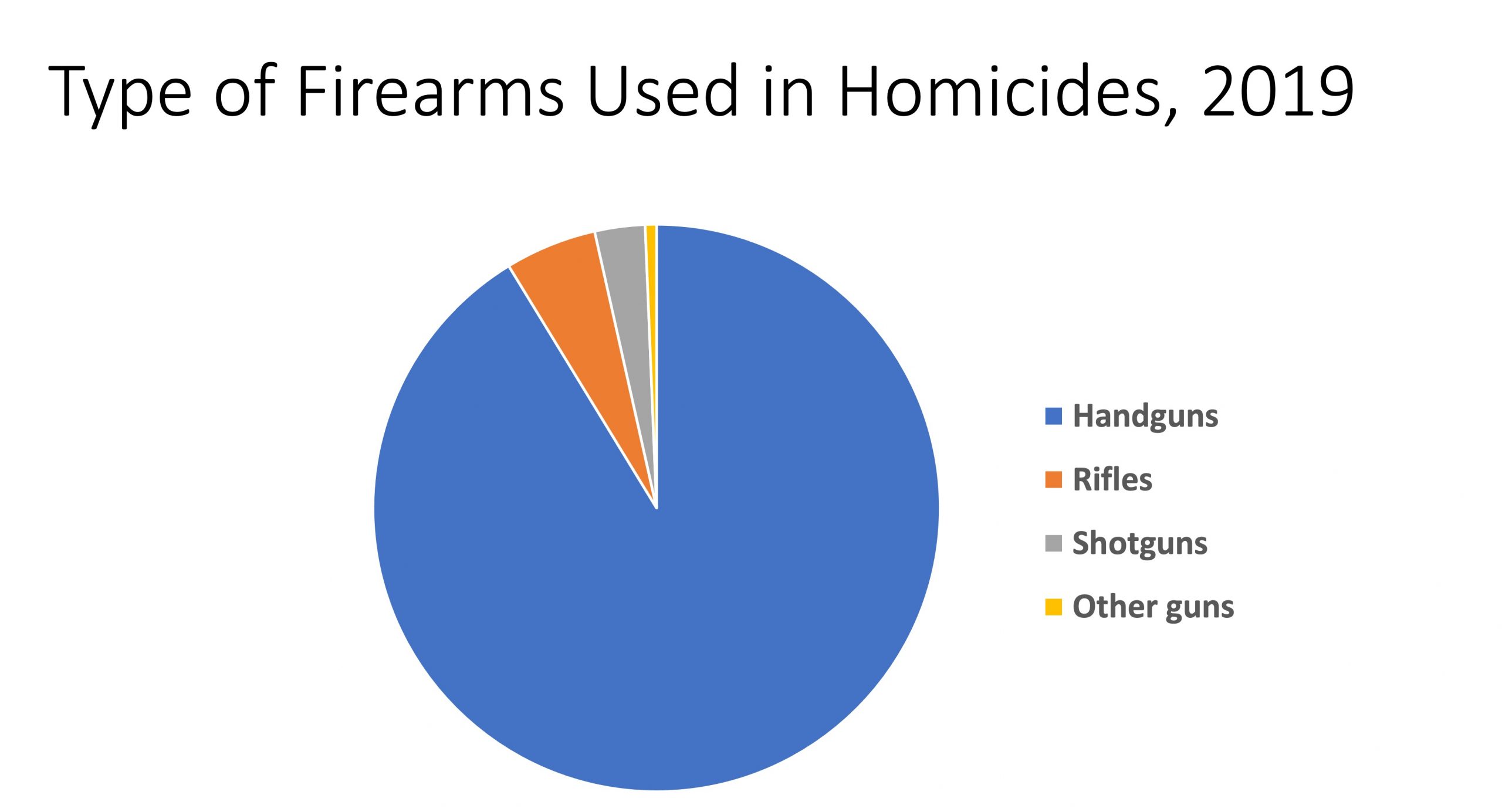 The CDC reports that in 2020, the firearm-related homicide rate was the highest that it has been in more than 25 years with a 35% increase compared to 2019. Overall, 45,222 Americans died from firearms in 2020. There have been a total of 18,882 gun-related deaths so far this year in the U.S. which puts us on a pace to exceed the 2020 number – and we have not even reached the busy summer homicide season. There have been 247 mass shootings so far this year and last Wednesday, there were fatal shootings at hospitals in Tulsa, OK and in Dayton, OH. Last Saturday, a physician and 2 nurses were stabbed in an emergency department in California. Our hospitals are becoming increasingly dangerous – The International Association for Healthcare Security and Safety reports that there was a 47% increase in hospital violent crimes in 2021 compared to 2020.

Violence against healthcare workers is incredibly common. According to the Bureau of Labor Statistics, healthcare providers account for 73% of all workplace injuries due to violence.  A hospital is one of the most dangerous places to work in the United States. 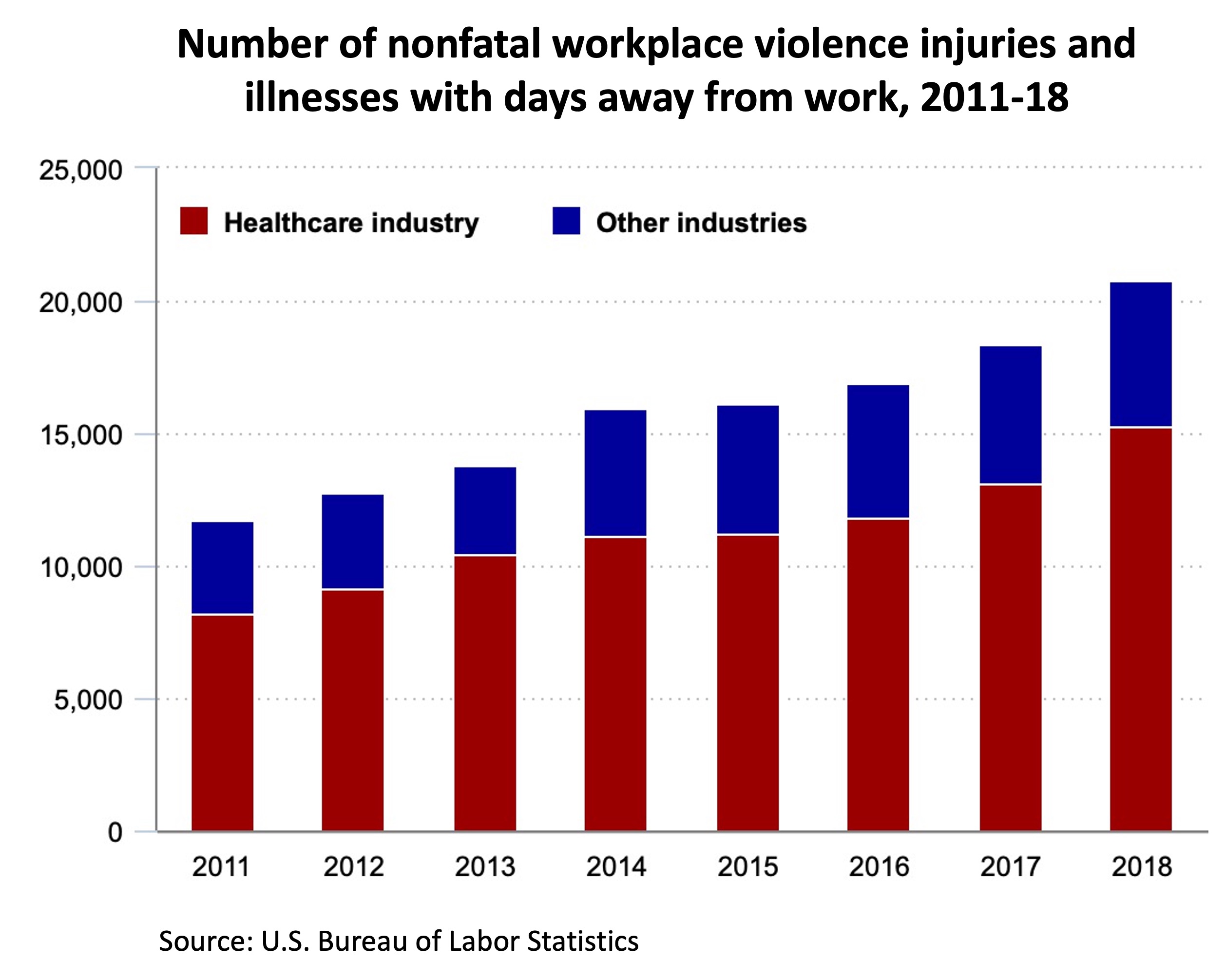 In a 2017 study of 346,343 emergency department visits, weapons were found in 3% of all ER visits with a total of 10,691 weapons confiscated at screening. Weapons were most likely to be found at hospitals that provide trauma and behavioral health services. Knives were the most common weapons found.

What can we do to keep our healthcare workers safe?

There is no single best answer to this question because each healthcare setting is unique. Measures that are effective in an emergency department may not be practical nor effective in a free-standing medical office. Here are some of the steps that we took to improve healthcare worker safety in our own hospital and clinic building.

Gun control advocates often say “Guns kill people”. Gun rights advocates counter by saying “Guns don’t kill people, people kill people”. I think they are both wrong: people with weapons kill people. Guns just happen to be America’s weapon of choice. The United States has, by far, the highest gun-related homicide rate of all high-income countries. Our healthcare facilities are not immune to homicide and other forms of violence. Doctors will always be blamed by some people for their pain, for the outcome of their illness, or for the death of a family member. Our job as hospital leaders is to create a safe workplace so that our doctors can improve people’s lives without having to worry about losing their own.